Share All sharing options for: Take a peek at a $100,000 fantasy football lineup 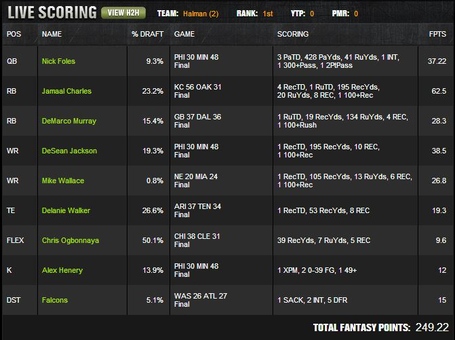 Are you competing in your fantasy football championship this weekend? Well good for you, but for the rest of us, the fantasy football season is over. And unless you try out 1-week fantasy, it’ll be a long nine months until Sundays are enjoyable again. Thankfully there’s a special contest that is perfect to get you started.

DraftKings, the 1-week fantasy football site that is going to be awarding one player $1,000,000 this weekend, has a special contest only for SB Nation readers. Enter for just a few bucks and get access to an exclusive contest hidden from everyone else on the site. The winner will get a shot at $200,000 in prizes next weekend, and the top-40 places will pay out.

You’ll also get a free contest entry in your account (it’ll show up automatically) with any first-time deposit.

1-week fantasy football is simple. Draft the best possible team under the DraftKings salary cap, click submit, and watch your team pile up the points. You’ll only be competing against those in the SB Nation network of blogs. The possibilities are pretty much endless—the same week this contest is going on one player will literally be winning $1,000,000 after one contest.

There are plenty of worse ways to spend $5 on a Sunday than winning huge cash prizes and keeping your fantasy football dreams alive. Heck, it’ll cost you about $20 to see whatever waste-of-time is coming out in theaters this holiday season. Look in the mirror and ask yourself if you’d rather see Tyler Perry’s A Madea Christmas, or have a blast competing for fantasy football prizes.

Just try it. It’s $5. You could win a boatload of cash. And you get a free entry into another contest just for making a new deposit.

What are you waiting for?

The Editorial Staff of SB Nation was not involved in the creation or production of this special advertiser feature.