Why the Brooklyn Nets can't turn back now

Brooklyn might still win the Atlantic Division and even get home court advantage in the first round. But with Brook Lopez's injury ruling out a title run, the Nets are doomed to fall short of their goals over the next couple of seasons.

Share All sharing options for: Why the Brooklyn Nets can't turn back now

On Saturday, the Brooklyn Nets learned that Brook Lopez, the team's best player, had broken a bone in the fifth metatarsal of his right foot for the second time in two years. The Nets are 9-17, 2.5 games out of the No. 8 seed in the East and just 1.5 games out of the Atlantic Division lead.

But, of course, simply making the playoffs or winning the division -- those weren't the Nets' goals. This team, with a stunning total payroll of $180 million, was built to compete for or win a title. The Nets aren't close to being in the same tier as the Pacers or Heat in the East, and losing Lopez makes coming remotely close even tougher. Everything about the Nets right now is bleak, and a division banner isn't going to fix it. Heck, a series win over the Wizards, Knicks, Pistons or whoever wouldn't fix it, because Brooklyn would get smoked by Indiana or Miami.

More than that, everything about the Nets right now is bleak. Brooklyn's front office didn't just waste an asset or two to race for the title this season. The Nets could stunningly lose five straight high draft picks in this decision to mortgage the future to chase contention now. 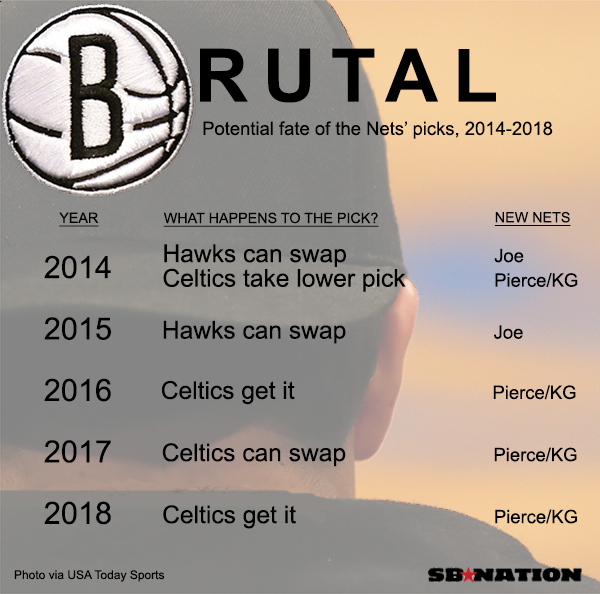 Keep in mind that this doesn't account for Nets picks traded in 2011, 2012 and 2013. The 2011 pick was Enes Kanter, deliver to Utah in the Deron Williams trade along with 2010 No. 3 pick Derrick Favors. The 2012 selection was No. 6 pick Damian Lillard, a Rookie of the Year and potential All-Star traded for Gerald Wallace. The 2013 pick ended up being Shane Larkin; it was a pick previously acquired and then dealt in the Joe Johnson deal. The Nets kept their own pick, which was lower than the Larkin pick. It ended up being Mason Plumlee, who will now be called into heavier action due to Lopez's injury.

If the Nets want to pick in the first round in the stacked 2014 draft, they'll need to buy or trade back in. If the Hawks finish ahead of the Nets in the standings, they'll swap picks. Whichever pick Atlanta doesn't take will go to the Celtics. As of Sunday, the Nets have the seventh-worst record in the league. If the standings hold, the Nets would give the No. 7 pick to the Hawks.

But as the chart shows, it's not one year of pain. If the Nets don't dig out of this mess, they will be handing lottery picks to the Hawks and Celtics through 2018. Through excessive use of pick swap options, the Nets have disregarded the infamous Stepien Rule. The Stepien Rule, named after a horrid former Cavaliers owner, prevents teams from dealing consecutive future first-round picks, but there's no such rule against swap options since teams keep a pick. So there's a real chance the Nets have already given up their next five first-round picks. If they have, they'll get another team's pick in two of those years.

In essence, the pick swap option is a bet on yourself. When the Nets gave Atlanta the swap option for 2014, Brooklyn was betting it'd be better than the Hawks and, thus, Atlanta wouldn't swap picks. Whoops! The same applies for 2015 and 2017. The latter one comes a long way out, after any current Nets or Celtics are under contract. But GMs expect they'll be around a while. So that 2017 pick swap option is basically Billy King betting his Nets will be better than Celtics, and Danny Ainge bet the opposite.

Right now, all of King's bets look horrible. The bet that adding Joe Johnson, Paul Pierce and Kevin Garnett to the Deron Williams-Brook Lopez tandem would give his boss a title contender isn't paying off. The bet that the Nets will be better than the Hawks and Celtics over the long-term seems hopeful at best at this point. That's a terrifying couple of realizations.

But this is not just an explanation of why Brooklyn is so bleak at this point. It's also an explanation of why the Nets can't turn back now. There's no point in playing to lose when you can't be relatively sure you'll get to keep your own pick until 2019. You can't tank for the rest of the decade. At this point, getting worse -- even briefly -- will only benefit the Hawks and Celtics.

Nets Daily reports via league sources that Brooklyn won't make any major moves in light of Lopez's injury, at least not yet.

Can Brooklyn still win the Atlantic?

It says a lot about the state of the division that this is even a question.

Don't forget about Brooklyn's cap sheet, which isn't exactly rife with desirable contracts. The Nets could find a home for Deron Williams if needed, and Lopez could likely be sold despite the injury. Pierce is basically a high-profile expiring contract. Garnett is due $12 million next season, and might choose to take that in retirement. Johnson has two more years and $48 million left on that beautiful little deal. With the exception of Williams and maybe Lopez -- chronic foot injuries and centers tend to give folks shaky nerves -- there's no one on the roster for which the Nets could conceivably get a future first-round pick or a really nice prospect.

Instead, given Billy King's M.O. and Mikhail Prokhorov's interest in buying relevance, the Nets will possibly leverage those expiring contracts into even more star names. Brooklyn could trade Pierce for a player with multiple expensive years on his deal. (Pierce for Rudy Gay would have been an interesting idea before Toronto dealt the maligned wing to Sacramento.) The Nets could do the same in the summer with Garnett and Jason Terry ($6 million in 2014-15). It's not like Pierce, Garnett or Terry are working out well anyway.

In the end, if the Nets can figure out a winning combination on the court, the draft pick outlook will improve measurably. The pick swap options look bad precisely because it currently looks like the Nets will give up a high pick this season. If the Nets somehow recover and find themselves picking in the 20s -- as they did last season -- it's not as much of a loss. The same obviously applies to the picks traded outright. Remember, the Nets bet they'd be really good, lessening the impact of the loss of the picks. If the Nets can find a way to become really good really fast, it will all work out.

There's absolutely no upside in the other direction, so it's the only choice King and Prokhorov have. That's what makes following what they do next so interesting. How deep will the Nets dig to find a way out?

• How Kevin Love is reviving the Timberwolves

• The "Nail": Ex-NBA assistant explains the key to help defense

Brook Lopez out for season with a broken foot