Atlantic Division woes leaving a stain on this NBA season

Between misfortune and planned rebuilding, the depth of the Atlantic's embarrassment knows no bounds.

Share All sharing options for: Atlantic Division woes leaving a stain on this NBA season

Two of the five Christmas games featured blowouts starring teams from the Atlantic Division. There's no better way to spread holiday basketball love than seeing both New York teams getting pummeled at home in front of depressive crowds.

The Knicks and Nets, of course, aren't the only teams in their division getting killed regularly. All five teams are pretty gross; the Atlantic-leading Raptors are 11-15 overall and 8-14 against teams not in their own division. Toronto might finish the season around .500 by simple virtue of playing against the other Atlantic teams a total of 16 times. The Celtics could do the same, even though Boston is rather explicitly built to garner a high draft pick.

The Atlantic isn't just a bad division overall. It's a totally hideous mess. Let's compare it to the other divisions to date this season. 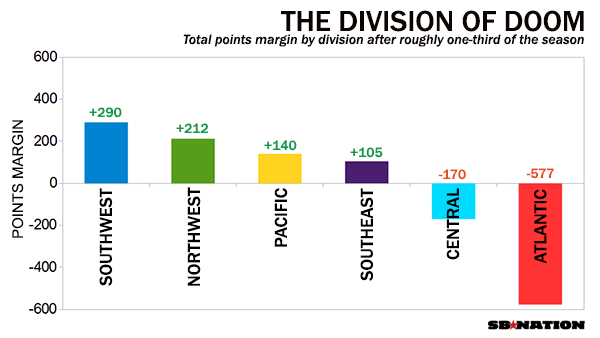 The five Southwest teams have a combined points margin of +290 this season. Only one of the teams (Memphis) has a negative scoring margin currently. The Northwest isn't far behind at +212. The Jazz are the sole Northwestern team with a negative scoring margin, but it's a whopping -274. The Pacific and Southeast aren't far apart; the former has two teams in the red, and the latter has three (though Charlotte and Washington are just barely so). The Central is top-heavy: the Pacers are a league-best +260, and everyone else is in the negative zone (though Detroit and Chicago are pretty marginal).

Then we come to our beautifully disgusting Atlantic, a combined -577 this season to date. All five teams are in the red. The Raptors are near respectability at -4. The 76ers are the worst at -259 (just shy of Utah's league-worst mark). And in that ever-important Battle For New York, the Nets (-150) are currently a bit worse than the Knicks (-109).

Mostly, this is just a fun quirk of the 2013-14 season. Three of the handful of franchises who wouldn't mind a 20-win season due to draft positioning and rebuilding plans happen to play in the Atlantic. That's happenstance. Two of the most disappointing, injury-plagued teams of this season happen to also be in the Atlantic. The Knicks and Nets need and want desperately to win. The Celtics and Sixers were built to lose. The Raptors were so bad that the start of the demolition process (trading away Andrea Bargnani and Rudy Gay) made the team better; if Boston and Philadelphia need to get worse in order to get better in the long-term, Toronto needed to improve in order to get worse in the long run. The Atlantic: where nothing ever makes sense.

There's a real chance that the Atlantic champ will be objectively worse than the No. 13 team in the West

While this is mostly a fun quirk of the ledger, the problem is that one of these teams is going to get a playoff berth. A No. 4 seed, in fact. While they won't get home court advantage unless they earn it, there's a real chance that the Atlantic champ will be objectively worse than the No. 13 team in the West, which is currently the case. There's a chance that the Atlantic champ, who gets the No. 4 seed and a first-round series with the East No. 5, will be worse than the East No. 7, who gets a first-round date with Indiana or Miami. This, too, is currently the case.

There are all sorts of potential solutions to prevent divisional injustice, and it's encouraging to know that the next commissioner will look at it. But in the meantime, unless one of these Atlantic teams makes a vast and swift improvement, the banner its champion hangs will be a gnarly little stain on the season.

BUT WAIT! THE ATLANTIC IS NOT THE WORST DIVISION IN BASKETBALL!

We need more smiles in sports, so here is The Hook's best effort to make the Atlantic and the Atlantic's fans smile.

And when we incorporate our hypothetical Welp Division into the chart we used above, the Atlantic doesn't look so bad after all. 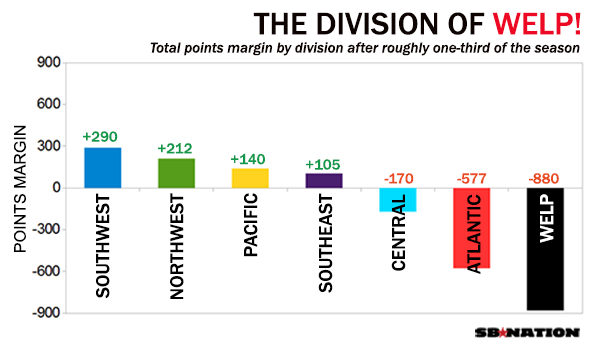 We don't need to tweak the playoff seeding system to prevent the Atlantic from sending a team into the top half of the playoff bracket. We need to maintain the Welp Division in the league standings to boost the Atlantic Division's confidence and give them the inner strength they need in order to not be a total, constant embarrassment.