The Cones of Silvershire: a brand new drafting experience

Share All sharing options for: The Cones of Silvershire: a brand new drafting experience

Basketball nerds got an awesome Festivus gift from Grantland's Zach Lowe and his source this week: The Wheel. The Wheel is not just a medieval torture device; it's an idea to replace the current, maligned draft lottery system, and it's gaining traction in league circles.

Right now, the 14 teams who miss the playoffs all have a chance to win a top-3 pick. In a practical sense, the seven worst teams land those most of the time. The worse you are, the better your chance. The current draft lottery system is two parts being awful (or trading with awful teams) and one part hopper luck. The problem with it is that the two parts awful encourages teams to rebuild by (surprise!) being awful for multiple seasons.

The Wheel, devised by an unknown team official, would get rid of most of the uncertainty surrounding draft positioning. It's basically a two-column spreadsheet. Each team would be assigned a draft position for each of the next 30 years, with an assurance that they'd have a top-5 pick every six years and the No. 1 overall pick once every 30 years. Instead of the Nos. 1, 2 and 3 picks being decided by which horrible team gets lucky, it'd be determined by a chart drawn up in an office. It would strip the incentive (err, sole reason) to field a losing team. Every team would probably fight for the playoffs every season, though you'd still have years in which clubs would be waiting out the expiration of bad contracts and hoping to preserve cap space for a major move. (See: the 2009-10 Knicks.)

My reaction to The Wheel is that it's not complicated enough. As I said, once you determine the order used in The Wheel, it becomes a two-column spreadsheet. That's too simple a system to be used by a complicated, mature league! That's like taking a high school RPG club and forcing them to play Candyland every year.

What we need is something new. We need The Cones of Silvershire.

The Cones of Silvershire is a brand new drafting experience. Thirty GMs participate, and the rules can be altered to accommodate 29 GMs in the case of penalties (Joe Smith'd) or up to 32 in the case of expansion. The game is administered by The Scepter Master, which will be the current NBA commissioner. During play, he must wear a mitre featuring the logos of all participating teams. Think the Pope's hat mixed with one of those amazing 30-patch bomber jackets. Here's a rough prototype. 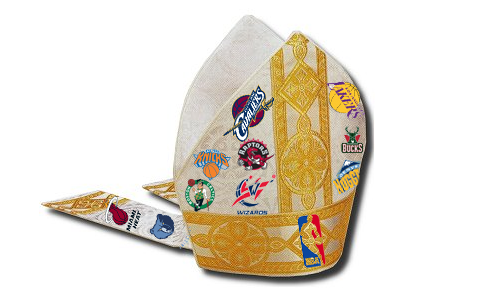 (Note that the official Silvershire mitre would be created by an experienced milliner.)

Each team patch will be attached with Velcro. The object of the game is to have your patch removed from the Silvershire mitre as quickly as possible. The official NBA logo patch is also attached with Velcro. Only one player can remove it during play: the Usurper. This will be a secret entrant in the game, usually a high-ranking NBA team executive or the D-League commissioner, but it can be any NBA personality. No one knows the identity of the Usurper until he/she reveals him/herself, but there is a 50 percent chance in any given year that it is Derek Fisher. The Scepter Master can use armed guards to protect the patch. Of course, as the Scepter Master, he can also adjust rules to nerf the Usurper's powers and attack his/her weaknesses. But this power is useless until he knows the identity of the Usurper.

If the Usurper successfully removes the NBA logo patch from the Silvershire mitre, he/she immediately becomes the commissioner of the league. Yeah, I know. The stakes are high.

To remove his team's patch from the mitre, a GM must collect four cones. Cones are won by landing in a HotSpot. HotSpots are 12 spaces apart. Here is a rough prototype of the game board. 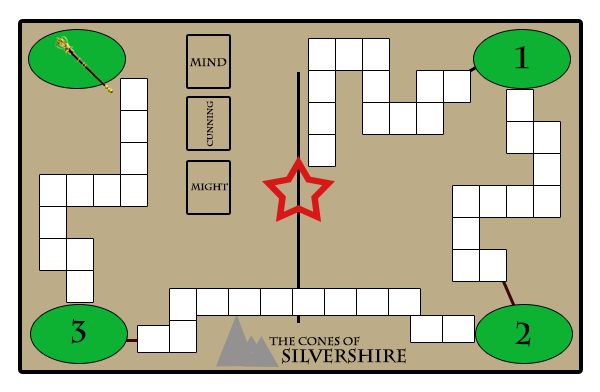 On each turn, the GM will choose one of four advancement methods: Tests of Mind, Tests of Luck, Tests of Cunning or Tests of Might.

The player draws a Tests of Mind card. This card will contain a trivia question relating to basketball stats and a point value. Here's a rough prototype. 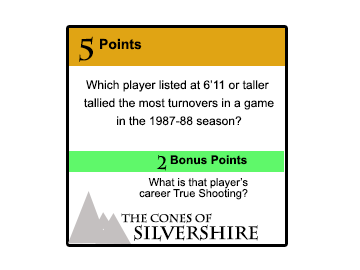 There is a 24-second timer and no electronic devices are allowed. The Adjudication Assembly, a group of high-profile Twitter users chosen by the Scepter Master, determine if the answer is correct using Basketball-Reference.com's Play Index. Questions must be answered to three decimal places, if applicable. If the answer given is incorrect, GMs from the same division can blow a whistle to be given a chance to give the correct answer. If successful, they steal the points. If no one answers a Test of Mind correctly, the Lakers are automatically given the points.

If the GM is found cheating using secret communication, he will be disqualified from the game and placed in the lowest available slot in the draft order. If he represents a team based in New York, Los Angeles or Chicago, the Scepter Master may at his discretion roll 1d6 to determine if disqualification is avoided. If the die turns up even, disqualification is avoided and the team advances immediately to the next HotSpot on the board, receiving a cone. If disqualification is not avoided, the team is placed in the lowest available draft slot and the GM is forced to give a public apology to his team's fans.

The team's Tank Factor is calculated: [82 - (team losses last season) + (games started by players with a rating of less than 60 in the latest 2K game) * (team's youngest point guard's turnovers per game average) / (number of permanent head coaches fired in the last five calendar years)]. Round to the nearest integer. The team receives the least of that number or 50. One hundred numbered ping pong balls are entered into a hopper. The Scepter Master extracts balls from the hopper one at a time until a ball less than the team's Tank Factor is drawn. The number of spaces the team can move forward is equal to five minus the number of balls drawn. If five balls are drawn without a winner, the team must give its draft pick to the Knicks and consign its best player to the Shooting Stars competition at the next All-Star Weekend.

The GM draws a Test of Cunning card. This card will contain one of the 30 team logos. The GM has five minutes to execute a legal trade with this team. He may need to make an unbalanced trade in order to receive approval; other teams will not necessarily be inclined to help rivals advance in The Cones of Silvershire. If unsuccessful in completing a trade, both teams move backwards two spaces. If successful, the drawing team moves forward a number of spaces equivalent to the absolute value of the projected wins change as ascertained by ESPN's NBA Trade Machine. The team whose card is drawn does not move forward.

For example, if the Heat drew a Test of Cunning card and completed this trade:

... then the Heat would move forward 15 spaces. This would guarantee capture of at least one Cone, but at a serious price.

If the GM draws the card with his team's own logo on it, he must immediate waive one player from his roster with a career PER of at least 15 and a guaranteed contract for the next season. If he has no players under contract with a career PER of at least 15 his owner must sell the team to Chris Hansen and Steve Ballmer, who will immediately relocate the franchise to Seattle. If Seattle has already been awarded a franchise via normal league machinations or through The Cones of Silvershire, the team is relocated to Juneau and becomes the FrostDonkeys.

The GM can choose to draw a Test of Might card. The card will name a former or current Indiana Pacer and a point value. The GM, one of his front office employees or one of the team's coaches must compete with the named Pacer in one of the two contests listed on the card. The contest will be chosen by Twitter users via poll. Here is a rough prototype of the card. 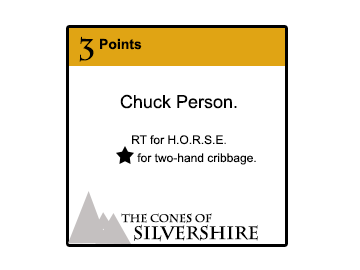 If the named Pacer is a current employee of the drawing team, he must be fired immediately and a Test of Cunning card must be drawn by the GM. The Pacers cannot select a Test of Might card. But once per Cones of Silvershire game, the Pacers may during their turn submit one player of the Scepter Master's choice to an 8-lap go-kart race against a referee of the team's choice. Indiana advances a number of spaces equal to the number of times its player laps or concusses the referee, whichever is greater.

When a team reaches the fourth HotSpot -- called the Oval of Triumph and signified on the game board by a scepter -- that team's logo patch is removed from the Silvershire mitre and is placed in the highest available slot in the draft order. Therefore, the first team to reach the Oval of Triumph receives the No. 1 pick in the draft, and so on. If a team is disqualified for any reason, it takes the lowest empty slot in the draft order. The game is complete when all draft slots are filled.

Doc Rivers will hide one 30-sided dice and one marked Sacagawea coin in different NBA arenas during the course of a season. These are in play for all future games of The Cones of Silvershire until used.

A team that finds the 30-sided dice rolls it once under the supervision of the Scepter Master. The GM can then assign any team (including his own) which has not already been placed in the draft order through victory or disqualification into that draft slot. For example, if the dice rolls results in No. 3 and the rolling team has not already won, the GM can choose to place his team there. If he rolls a No. 29, he can place another team there. If a spot is already occupied, that team is booted immediately to the starting point on the game board and its logo patch is returned to the mitre. There is a 15-minute window after the dice roll in which teams can bargain to be placed or not placed. Trades can be completed during this period.

The team that employs Doc Rivers may not complete the quests for the Challenge Plays. Instead, once per game its starting center may throw a dart at the Silvershire mitre from 15 feet. If a team logo patch is hit, that team is placed in the lowest available draft slot and its oldest player must participate in Vegas Summer League, averaging no fewer than 38 minutes per game. If no patch is hit, the team that employs Doc Rivers must convey a second-round pick to the Minnesota Timberwolves and hire David Kahn as a consultant at the NBA average player salary. The Scepter Master can choose to wear the Silvershire mitre during the dart toss or to assign an active All-NBA player to wear it. The latter choice leaves the Scepter Master vulnerable to the Usurper, however.

I don't foresee any issues with this and look forward to the NBA Board of Governors considering this proposal soon. If you have any proposed improvements to the game, let us know in the comments.