In the Nowitzki age, power forwards have moved further and further from the basket to get their points. But there exists a stretch four spectrum. They aren't all Ryan Andersons.

Share All sharing options for: The New Nowitzkis: LaMarcus Aldridge, Kevin Love and Ryan Anderson on the stretch four spectrum

Dirk Nowitzki is but one of the greatest players of his generation: Tim Duncan, Kobe Bryant and Kevin Garnett are generally considered superior. Duncan exists as a throwback to an era gone by, however; he would have been a natural rival to David Robinson, Hakeem Olajuwon, Rik Smits and even the Arvydas Sabonis never granted to NBA fans. Kobe is a singular talent who helped progress and develop the Jordan prototype for the modern, three-heavy age. He's by no means a new basketball creation. Garnett was always different than what came before, primarily due to his guard-like skills of passing and perimeter defense. KG as a style of play makes someone like Anthony Davis possible.

A daily column on the NBA.
12/2: Pelicans will miss Anthony Davis dearly
11/29: How the Knicks bounce back
11/26: Lakers took the easy route with Kobe
11/26: The Bucks are accidentally tanking
11/25: Preserving the Derrick Rose era

Dirk has as many titles as Garnett and as many MVPs as Kobe, but it's not particularly controversial outside of Dallas, Germany or Mark Cuban's general orbit to say that he's probably considered about the fourth best player of his generation. (We're also assuming LeBron represents the start of a new generation, and that Shaq exists in a prior generation. It's all pretty messy.) But more than the three above him, Dirk really has revolutionized the NBA by bringing the stretch four into the mainstream.

The evidence is everywhere.

Ryan Anderson hit seven three-pointers on Monday to lead the New Orleans Pelicans to a triple-overtime win over the Chicago Bulls. Kevin Love is the No. 6 scorer in the NBA, and more than a third of his shots are from long-range. And perhaps the league's best team -- the Portland Trail Blazers, who knocked off the excellent Indiana Pacers on Monday -- is led by LaMarcus Aldridge, who is shooting better than 40 percent on mid-range jumpers, which constitute almost two-thirds of his offensive arsenal.

Anderson, Love and Aldridge are varying levels of Dirk. They exist in different spots on the stretch four spectrum. But their collective excellence this season is showing just how much more open the new era is for power forwards.

Anderson is the stretchiest of the fours: half of his field goal attempts this season have come from beyond the arc. Here's his frequency shot chart from NBA.com/stats. 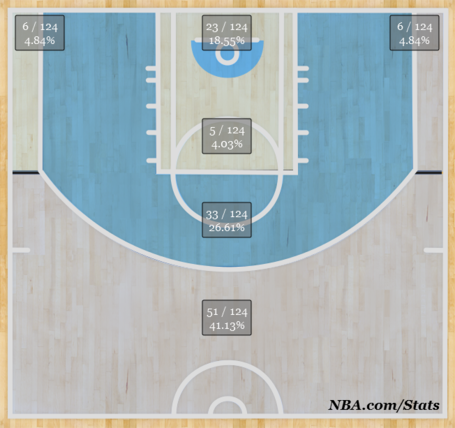 Less than a quarter of Anderson's shots come in the paint. Think of the most renowned scoring power forwards in history: Karl Malone, Charles Barkley, Duncan. Anderson is the polar opposite. The funny thing is that he's not bad in the paint: he shoots better than league average in the restricted area. He's just a much bigger threat from outside. So says his career .390 shooting percentage from beyond the arc.

Love is a step down the spectrum toward tradition. He takes a lot of threes -- more than six per game this season -- but also does a substantial amount of work inside the arc. 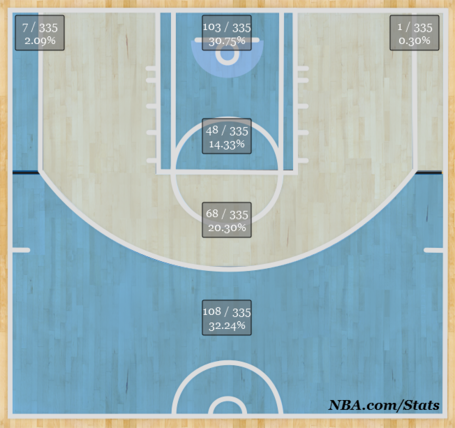 That said, only 44 percent of Love's attempts come in the paint. Love is a terrifically skilled post player and strong, yet he floats out to the perimeter, because that's what power forwards do these days and because Love can excel out there.

And then we come to Aldridge, currently the No. 8 scorer and the best weapon on the league's No. 3 offense. LMA does not take threes: it's really the factor that makes him most unlike Dirk. Aldridge has attempted fewer threes in his 8-year career than Love has attempted through one month this season. But while that places LMA further away from Pure Ryno on the stretch four spectrum, it doesn't mean he's not Nowitzkian in his own way. 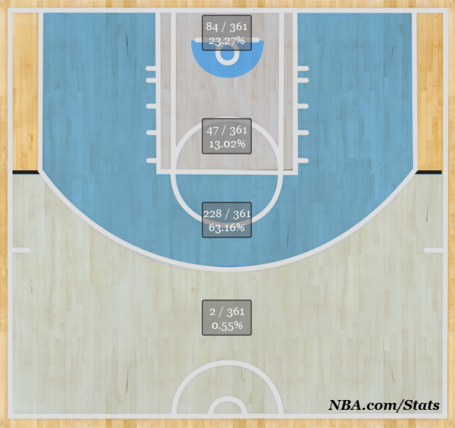 Aldridge has the length, strength and skill required to back into the post and do work. He also had a fierce young point guard in Damian Lillard to run the pick-and-roll with. Yet less than 40 percent of LMA's attempts come in the paint, with less than a quarter of them in the restricted area. He lives at the elbows and baselines, and it works incredibly well by he's such a good shooter.

Those are questions to investigate, as is the question of whether you can turn a more traditional power forward into a stretch four, and whether you even should. But make no mistake: the position is, right now, dominated by shooters. Thanks, Dirk.