Why do the Knicks look like a high school team on defense? Because they keep thinking they can get away with switching assignments when they obviously can't. Plus: why does Damian Lillard struggle to finish around the basket?

With apologies to countless other breakdowns that had fans pulling their hair out, I think I've found the one possession that is the Knicks' season in microcosm. It's not any prettier than it sounds.

It happened last Friday, with the Knicks about to let a double-digit lead slip away at home to the Toronto Raptors. Two minutes left, seven-point game. Needing a stop, the Knicks instead let this happen:

That's Jonas Valanciunas standing all alone under the hoop for a slam dunk, plus a foul. The Knicks' chances of rallying were finished.

Analyzing what happened here provides the perfect glimpse into the Knicks' biggest problem. The set started with DeMar DeRozan trying to get to the basket. Despite the shot-clock situation, despite the obvious desire of DeRozan to drive instead of shoot a jumper, Tim Hardaway Jr. lets him do just what he wants. This forces Andrea Bargnani to leave his man to contain DeRozan's drive. 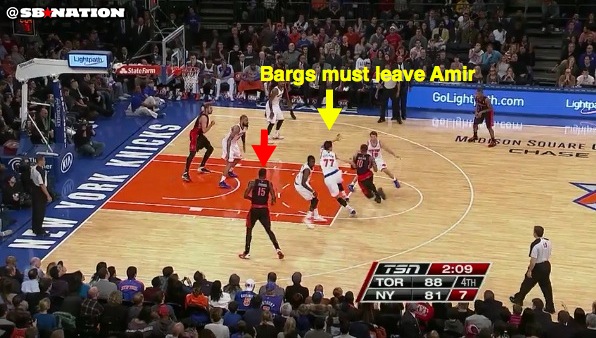 The Knicks eventually cut DeRozan off, but that just leads to more problems. Because Hardaway did such a poor job fighting over the initial screen, he must switch onto the bigger Amir Johnson. Meanwhile, Bargnani, who has no body control, has seen his momentum take him all the way to the baseline, where he's essentially guarding nobody. This will soon be a problem. 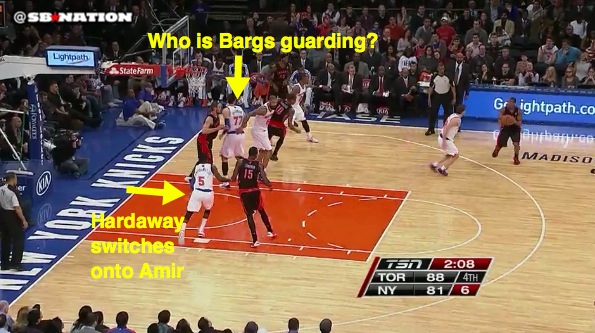 At this point, Kyle Lowry has the ball and he's going to drive to the hoop. When that happens, DeRozan naturally clears out to the perimeter. That's when all the fun starts. 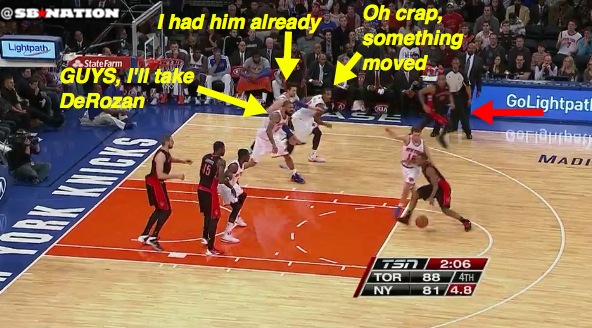 THREE Knicks -- Bargnani, Tyson Chandler and J.R. Smith -- make a move for DeRozan. THREE. As Lowry drives to the basket, all three, side-by-side-by-side, run at the same DeRozan who is, at that moment, taking himself out of the play. You'll notice that leaves just one man, Hardaway, to protect the basket. Naturally, he's not going to stop Valanciunas from finishing at this point. 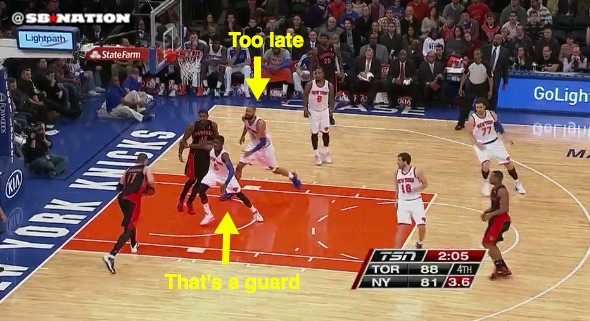 Slam dunk, plus the foul.

Terrible breakdowns like this (if not quite exactly like this) are common anytime you watch a Knicks defensive possession. They happen because there is no communication and no consistent plan for how to defend any sort of play. That, more than injuries and more than not playing the right lineups, more than the struggles of J.R. Smith or the downfall of Amar'e Stoudemire, is what has caused the Knicks' plight.

POSTING AND TOASTING: How to make the Knicks watchable

It's bad enough where you have to wonder about the leadership. Consider this: Mike Woodson loudly claims the Knicks shouldn't be switching assignments, yet a rewatch of Saturday's loss in Toronto to the Raptors showed 72 attempted switches, not including the nine possessions in which the Knicks were in a matchup zone or the final three possessions, when the Knicks were in scramble mode. There were a total of 94 possessions in that game, per Basketball Reference; once you wipe away the aforementioned 12, the Knicks ended up with nearly a switch per possession. If Woodson really isn't endorsing that strategy, perhaps he should let his players know, because they sure don't seem to be following orders.

Switching as a change of pace move or in specific matchups is fine, but using it too often or as a strategy is damaging because it induces more confusion, not less. Unless you have specific rules on when to switch and how to recover, players will need an extra split second to recognize what to do. That extra split second is often enough to lead to wide-open shots from appetizing spots on the court.

Notice what happens when Hardaway and Beno Udrih try to switch on a basic down screen on Friday.

Hardaway tries to pick up Lowry, but Udrih doesn't know what Hardaway is doing  and also runs at Lowry. As both players go to the ball-handler, Terrence Ross slips to the corner for a wide-open three. The Knicks commit worse defensive errors than this, of course, but I highlighted this play to show what a small communication error on a switch can lead to when there is no leadership or plan.

In Woodson's defense, this team isn't exactly rich with defensive talent. Carmelo Anthony is bad. Smith is worse. Raymond Felton is okay and Pablo Prigioni is sneaky, but both are injured. Chandler is a former defensive player of the year, but age and injury have slowed him down. Shumpert has the reputation of a great defender, but he loses concentration too easily and routinely gets smushed by ball screens, weaknesses that have been exacerbated by the current coaching staff. Udrih has always been a sieve. Kenyon Martin is good, but isn't healthy enough to give the Knicks consistent minutes. Stoudemire, of course, is in a league of his own. Hardaway is eager, but constantly leaves his man to provide help that isn't needed. 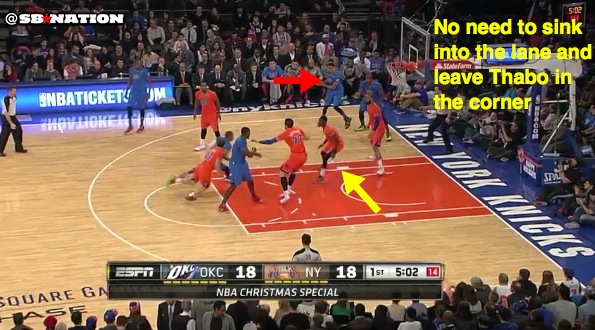 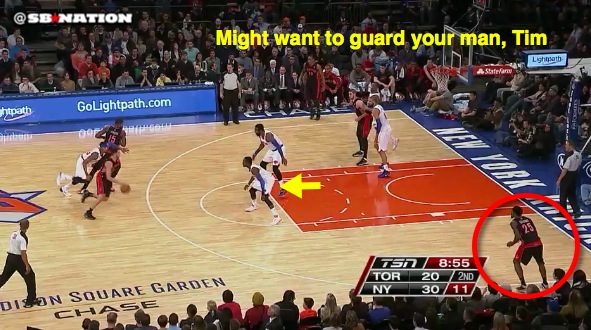 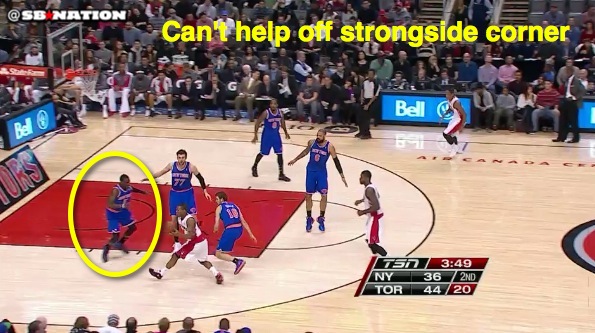 And of course, there's Bargnani, who might be the worst help defender in the legue. It'd take an enormous amount of bandwidth to cover all his defensive breakdowns this season, so we'll just choose these two screenshots: 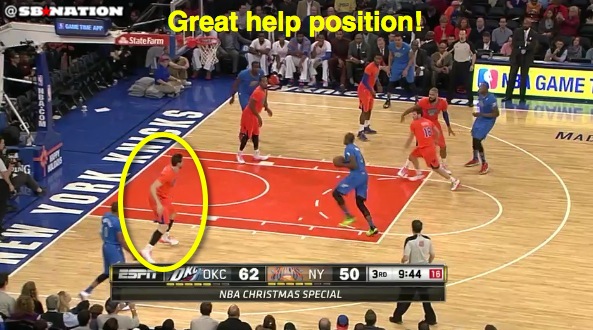 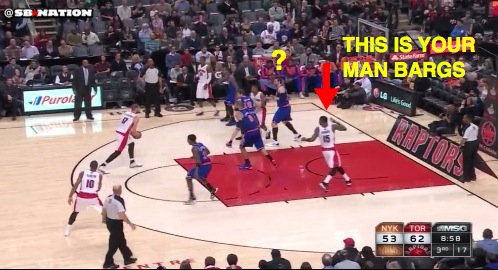 But by either endorsing or failing to punish all the switching, Woodson is absolving Knicks players of personal responsibility. The only reason this is allowed to continue is that players believe someone else will always pick them up. They're lazy.

And while a switch might work for one sequence in a given possession, it's only a matter of time before that laziness comes back to bite you. Too often, players are botching the second switch, surrendering a bad mismatch or rotating back correctly and still yielding a wide-open shot. Or, they surrender an offensive rebound because a guard is tasked with trying to box out a big man while the center flies at a shooter. For example:

A commitment to a sounder defensive strategy by Woodson and the players won't solve all issues, but it will certainly solve one. If they want to turn their season around, that's where they should start. Remove the gimmicks and defend the right way.

We take a look at one player each week that is either struggling or has displayed strong skill development.

I've seen many odd shot charts over the past few years, but this one might be the strangest. 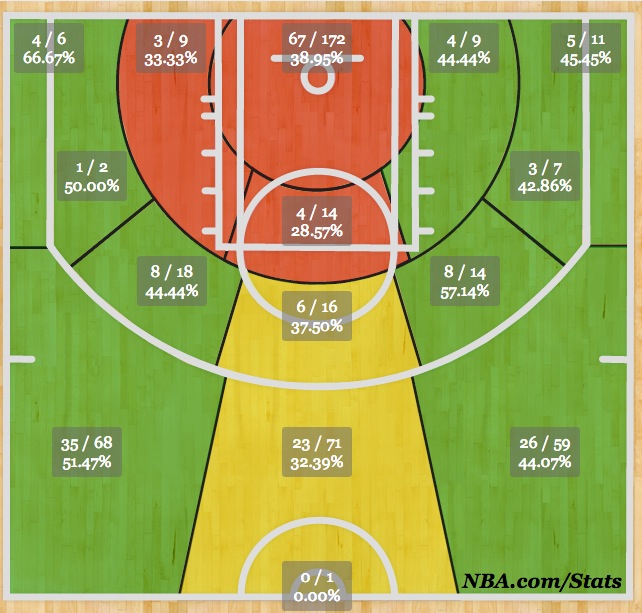 It belongs to Damian Lillard, the second-year point guard currently becoming a star for the Portland Trail Blazers. It shows a player that hits nearly half of his wing three-pointers, yet can't even shoot 40 percent in the paint. Only two guards -- Marquis Teague and Ricky Rubio -- have taken more than 40 shots inside of five feet and shot a lower percentage than Lillard's 40.6 percent.

Is this a weird statistical quirk, or is Lillard really that bad at finishing around the rim?

It might be the former to some degree. Lillard shot 50 percent in the paint last year, which still isn't great, but isn't as awful as this season. While he may not be finishing well, he is drawing more fouls, going to the line 5.4 times/36 minutes this season as opposed to 3.6 last year, per Basketball Reference. And, of course, this season is only two months old.

But watching Lillard on film reveals some issues. Most notably, Lillard is a very poor finisher with his left hand. A rough count of his 155 shot attempts inside of five feet revealed 51 missed left-handed shots and only 19 conversions. His left hand just isn't strong enough to control the trajectory of the ball around the basket consistently enough. This wild finish against DeJuan Blair shows how little touch Lillard has when trying to go to his left.

It also exposed some other issues that affect Lillard when he finishes with either hand. Rather than go straight into Blair, who isn't a shot-blocker, Lillard veers away to the side and tries to get too cute. This is especially problematic when attacking shot-blockers with long arms. The reverse angle of this GIF gives us an idea of how Lillard often shies away from big men like Andre Drummond.

He comes off the pick and roll and could jump into and power through Drummond using his strength, but instead, he slides to the right, allowing Drummond to use his long arms to make the shot more difficult.

You'll also see Lillard double-clutching often when attacking players instead of just going through them, like on this righty attempt against Josh Smith.

Double-clutching is a no-no for guards trying to score at the rim because it removes their greatest weapon, the power developed from accelerating to the basket off the dribble. When a guard double-clutches, it's as if he's restarting the attack. That's a huge advantage for the defender, whose arms are already up in the air, giving him the momentum. The best guards seize the forward progress gained from exploding to the rim and don't relinquish it by bringing the ball back down.

Perhaps this is a strength issue rather than a technical one. Lillard may know exactly what he must do, but may not yet have the body or confidence to carry it out. This botched finish over Anthony Davis was executed properly, with Lillard powering through Davis without double-clutching too much. It missed, though, because Lillard had a lefty layup fall short.

Blazers fans should hope that these issues, and not a problem that is more difficult to solve, are at the root of Lillard's struggles. It's not uncommon for young guards to struggle finishing at the rim early in their careers because they're not used to the type of length that's present at the NBA level.

Nevertheless, Lillard must decide what kind of guard he really is. If he thinks he can be explosive enough to power through defenders, he may want to prioritize getting stronger and jumping into shot blockers. If he thinks he's better off being elusive, he needs to develop his touch, especially with his left hand.

There are so many pieces to a play's puzzle that don't show up in the box score. We'll highlight one such piece each week in this section.

In happier Blazers news, Robin Lopez has been a godsend. One of the biggest reasons the Blazers have been so good this year is that they replaced a big man who gets numbers, but doesn't help you win (J.J. Hickson) with one that doesn't care about numbers and does help you win (Lopez). This play gives you a glimpse into Lopez's hidden value.

Chris Paul fools everyone when he's presented with a two-on-one situation like that. Somehow, Lopez baited him into throwing the lob, recovered to prevent DeAndre Jordan from dunking it, then got back in position to contest Jordan's layup attempt once the initial play didn't work. The only stat he got for his efforts was a defensive rebound.

10 other observations from the week that was.

A comprehensive look at how the Celtics' forward gets to the hoop and why he often struggles to finish once there.

How the Raptors' shooting guard has improved this season.