The NBA stepped out on a limb to save the Kings and Pelicans from relocation. So far, the league has been rewarded.

For a cold, calculating business, the NBA did something rather odd in recent years. It rescued two small markets threatened with losing their franchises.

In late 2010, NBA owners approved David Stern's request to have the league purchase the New Orleans Hornets from George Shinn. Shinn, who ruined the Charlotte market and had trouble finding a consistent paying audience in New Orleans, needed badly to sell the club, but couldn't immediately find a local buyer. Stern and the NBA owners could have allowed Shinn to sell to any number of vultures who wanted to move the club. Larry Ellison, who was rumored to be interested in adding a team in San Jose, was mentioned frequently. Instead, Stern took on the onus of holding on to the Hornets while a local owner was sought. And eventually, the search found paydirt, as Saints owner Tom Benson led a purchasing group.

Last January, the financially struggling Maloof brothers announced a deal to sell the Kings for a record price to a group that would move the team from Sacramento to Seattle, pending league approval. Most team sales zip through the process, provided the prospective owners' finances check out. Most relocation bids win easy approval. But Stern made a bold decision to give Sacramento an opportunity to present a purchase option of its own, against the wishes of the Maloofs. In the end, a local ownership option developed, along with an arena deal. NBA owners voted 22-8 against a sale and relocation of the Kings and unanimously to allow the Maloofs to sell to software mogul Vivek Ranadivé's group.

In buying the Hornets from Shinn and insisting on a local solution, Stern and the NBA forsake a relocation fee, a huge purchase price, the third-richest man in America in Ellison and the promise of a market far more robust than post-Katrina New Orleans. In keeping the Kings in Sacramento, Stern and the NBA forsake a relocation fee, the 21st richest man in America in Steve Ballmer and a market far richer with both residents and corporate dollars. Whether through altruism, less-than-obvious math or continued dedication to small markets, the NBA made decisions that you wouldn't necessarily expect.

As of right now, those decisions are paying off.

The Kings and born-again Pelicans have seen the biggest jumps in attendance  this season. The Pelicans, in their second season under Benson's watch, made big splashes in the last two offseasons to put a competitive product on the floor. In 2012, months after Benson bought the team, the Pelicans went out and signed Ryan Anderson, one of the best stretch power forwards in the league, and matched a max offer sheet handed to Eric Gordon. In 2013, the team flipped Nerlens Noel and a conditional 2014 pick for 23-year-old All-Star Jrue Holiday and then signed Tyreke Evans to a massive deal. Add in 2012 No. 1 pick Anthony Davis -- who might be an All-Star already -- and you have the core of a potential budding power that also happens to be loads of fun to watch. Benson allowed no mystery: he intends to win games starting now. That and brilliant effort from team officials to rekindle the love between the city and pro basketball has put butts in seats at New Orleans Arena.

Sacramento has made some big moves, too. It supplied the Pelicans with Evans, for one, and handed DeMarcus Cousins a max early extension. A few weeks ago, the team made its biggest move in years, trading some spare parts for Rudy Gay, who immediately became the highest-paid King in history and gave the franchise its highest payroll ever. Unlike the Pelicans, the Kings certainly aren't challenging for a playoff spot. But Ranadivé has talked about quickly rebuilding the dilapidated franchise and having a strong team soon. It seems like the Kings are following the Pelicans' blueprint in some ways. That hope, freedom from the Maloofian shackles and pride has fueled Sacramento's much-improved attendance.

But the Kings and Pelicans are just two points of data in this season's early attendance numbers. Let's take a look at the 10 biggest shifts from 2012-13 to this season in home attendance percentage (attendance divided by capacity). Data is from ESPN.com's attendance database. 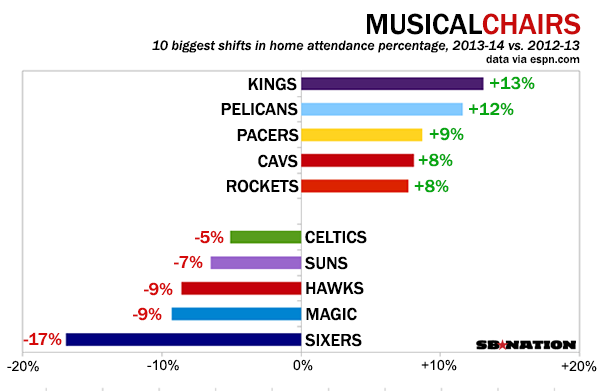 * One of the mysteries of recent seasons has been when Pacers fans would again fill Banker's Life Fieldhouse. Here's our answer! Indiana's attendance is up 9 percent this season, up to 93 percent of capacity. Given the Pacers' recent trouble financing its lease from the public-owned arena, this should help.

* Check out the Cavaliers! Unfortunately, the Clevelanders hoping for a great season at The Q have been disappointed to date. But hey, at least the Cavs aren't the Browns. The Cavs are currently at 87 percent of capacity, so there's still room for growth if the team reverses its fortunes.

* Houston shows that Dwight Howard (and title contention) still matters. Keep in mind, though, that James Harden didn't arrive until days before the 2012-13 season began, so this was the Rockets' first real offseason opportunity to market him. With billboards and more, Houston took advantage. The Rockets are at full capacity this season.

Now to the less pleasant numbers ...

* The Celtics' position isn't as bad as it looks. Boston still has 95 percent of its seats sold, it just isn't selling out every night as it did during the Garnett era. But yes, building a team that totally doesn't care about making the playoffs for a year or two is bad for the box office.

* Regarding the Suns, see above. Phoenix, of course, has confused the heck out of everyone by being really good and really entertaining, thanks to the trade for Eric Bledsoe and some neat rookie coaching by Jeff Hornacek. One imagines that season ticket sales were crushed by last season's listless effort and low expectations. It'll be interesting to see how attendance fares in the spring if the Suns keep this up.

* Before Al Horford's injury, the Hawks were on track to be the third-best team in the East ... and average a capacity of 73 percent. Does Atlanta really miss Josh Smith that much?

* The Magic and Sixers have the same formula as the Suns: an awful 2012-13 married with low 2013-14 expectations. The Magic have exceeded expectations, though nowhere close to the degree that the Suns have. Philadelphia ... has not. The Sixers' incredible drop is a real cost of all-out tanking; fans may support a full rebuild, but they really do not want to pay money to watch it in person.

Stunningly, though, the Sixers do not have the lowest home attendance percentage in the league this season. That dishonor goes to the Detroit Pistons, who have sold 64.9 percent of seats compared to Philly's 65.3 percent. The Pistons do have a larger arena capacity and 2 million fewer metro residents, however. On the other hand, the Pistons are actually trying to win games this season, which should count for something. In theory.

The woes of Detroit (No. 11 media market in the United States), Philadelphia (No. 4) and Atlanta (No. 8) perhaps provide some rationale for why Stern and the NBA rescued Sacramento and New Orleans, Market size, after all, isn't everything. A connection between a team and its city is more important.