There are two kinds of GIFs in this installment of Baseball Nation's favorite GIFs of 2013:

1. Inappropriate images that might not be safe for work viewing

2. Players getting hit in the beans.

You have been warned, and I won't judge you if you leave and meet us back for the next one.

Oh, you're still here. I guess you like GIFs of players getting hit in the beans. Huh.

But we'll start with the potentially NSFW GIFs. These aren't really NSFW. But they're close enough.

I don't know. Maybe this is a run-of-the-mill moment, but remember it's the WBC. There has to be at least one person in Italy who thought, okay, I'll check this sport out, and that's what they saw. There is so much incomprehensible baseball in that nine-second clip. Why is the guy in the white jersey mad? Why did the guy in the blue shirt try to murder him? Shouldn't he get a yellow card? Oh, and what's up with the demonstrative ass slap? Why wasn't he given a yellow card for that?

Don't google Rule 34. But here is an animation of some sort of dog-man putting a Hi-C box in Alex-Rodriguez's bottom. It's the clip you didn't know you needed until this very second.

While on the A-Rod subject, here's a GIF that's not inappropriate. Just creepy and amusing.

I can't figure out why it belongs … 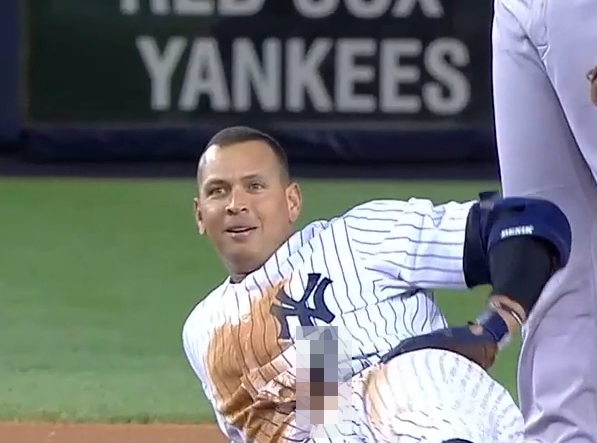 I found this clip from Sesame Street when a PR person for Sesame Street e-mailed it to me. I don't think this was what she anticipated. The actual clip is a second, so that's why the GIF is slow-motion. Also, I'm not proud of this. Also also, I'm very proud of this.

Too low! Too low!

Tulowitzki had to see the cameraperson following him, getting the post-game handshakes. Didn't care. And even after the "no thank you" jackknifing from Rafael Betancourt, Tulo was resolute, going out of his way to …

Okay, Internet. I suppose that's the only thing we really care about because we are both eight years old. So here are GIFs of players getting hit in the beans. The #1 A-plus moment happened in spring training, so I didn't get a GIF. This caption and picture are even better than the GIF, though, so start there.

Now, a lot of these are old, but I made GIFs of them this year because they seemed important. It was actually a down year for players getting hit in the beans. It's as if the players were protecting themselves.

Yes. As if. Before you start, please click play.

Old. But a fantastic example of the genre's potential.

I don't even know if that one's funny. It's like one of those dreams where you can't run or throw a punch. You keep watching it over and over, hoping he'll spin away at the last second.

Why don't you see the actual contact? Because he actually got hit in the thigh, and that's not nearly as funny. But a GIF of Fielder doing the bean dance is … well, moderately funny, maybe, if you're in the right mood. I told you, it was a down year for bean GIFs!

See? One of the best of the year was made from a '90s blooper tape. There's no way to make up for the dearth of quality …

He was okay, everyone. Tye Waller was okay. And he gave us all a gift. The gift of GIF. Sing his praises.

I wonder what they promised Rob the quality at Baseball Nation would be like when he joined the network.