Light snow is expected to fall on Michigan Stadium during Wednesday's Winter Classic.

The weather could be perfect for the 2014 Winter Classic.

A developing snow storm will pass through Southern Michigan on New Year's Eve and New Year's Day, and it could bring the perfect "snow globe effect" to Michigan Stadium, accenting the NHL's annual outdoor showcase with a light dusting of snow.

The National Weather Service is predicting that one to three inches of snow will fall on Ann Arbor, Mich, the site of Wednesday's game between the Toronto Maple Leafs and Detroit Red Wings, on New Year's Day.

Three inches of snow accumulating on the ice during the game would be an issue, as anybody who's ever tried to skate outdoors in snow can assume. The Zamboni can't get rid of that much snow if it all falls during play. But a glance at Weather.com's hourly forecast shows that we should only expect light snow during the game, which shouldn't impact the ice conditions or the game, and would look fantastic on television. 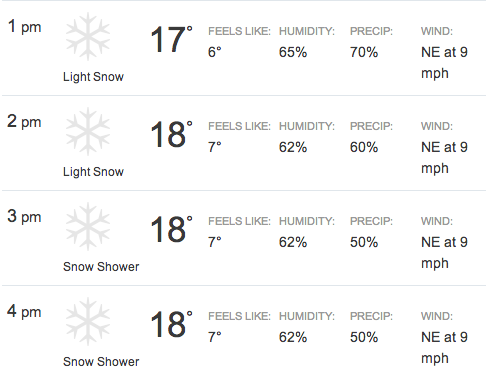 It snowed lightly during the first Winter Classic back in 2008 at Buffalo's Ralph Wilson Stadium. Sidney Crosby scored the game-winner in the shootout for Pittsburgh that year with light snow falling all around him, an image that's become pretty iconic in the five years since.

Comparatively, rain delayed the 2011 Winter Classic at Pittsburgh's Heinz Field from an afternoon puck drop to an 8 p.m. start, and the 2012 Winter Classic in Philadelphia was pushed back from 1 p.m. to 3 p.m. due to bright sun beating down on the ice, creating dangerous conditions for the players.

None of those issues this time around. The weather could be just what the NHL asked Santa for.

• Winter Classic : Will my seats suck? | What to do in Ann Arbor