The Pacers may have gone down big time to the Thunder on Sunday, but that wasn't enough to drop them out of the top spot.

There's no change at the top of this week's NBA power rankings, with the Indiana Pacers holding onto the No. 1 spot despite a blowout loss to the Oklahoma City Thunder on Sunday. While the Pacers remain on top, there was some shuffling in the top five. 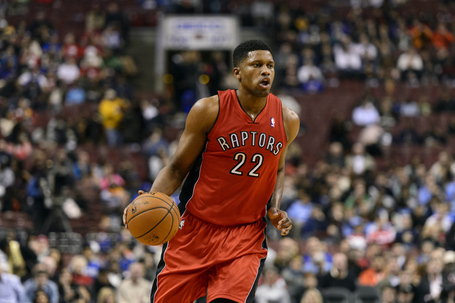 It was a weekend of opposites for Indiana. On Saturday, the Pacers went into San Antonio and destroyed the Spurs, but then that was followed up with a blowout loss in Oklahoma City. However, it's hard to blame Indiana for its no-show on Sunday, as the team was on the second of a back-to-back and was also wrapping up a grueling five-game road trip against the Clippers, Blazers, Jazz and Spurs.

The Blazers beat the Pacers last Monday and could have taken over the top slot if not for a heartbreaking loss to the Mavericks on Saturday. In addition to beating Indiana last week, Portland also took care of business against Oklahoma City, with LaMarcus Aldridge scoring 38 points and grabbing 13 rebounds in the win.

The Thunder dropped 118 points and shot 61.0 percent against the Pacers, who are the best defensive team in the NBA. That's kinda impressive. Oklahoma City hasn't lost a game on its home court all season. How do you feel about that, Russell Westbrook? (via @JDonSports):

The Spurs were very un-Spurs like in their 111-100 loss to the Pacers, with the final score not really reflecting the beatdown that occurred. Tiago Splitter left the game early with a calf injury, and San Antonio is hoping it's something that won't keep the big man out long.

The Heat have won two in a row in blowout fashion, but two losses earlier in the week take them down a few notches. Miami looked especially bad on Thursday night in Chicago, when an undermanned Bulls team took it to the Heat in the paint. In the two games since, LeBron James went 19-of-27 from the field.

Dwight Howard dominated his former team on Sunday, scoring 20 points and grabbing 22 rebounds in an easy win over Orlando. The Rockets somehow lost to the Jazz earlier in the week despite 37 points from James Harden, but that's not enough to drop them in the rankings.

The Clippers have hit a rough patch since J.J. Redick went down with a wrist injury. Los Angeles went just 1-3 last week, with a truly ugly loss to Cleveland over the weekend. The Clippers managed just 33 points in the second half of the defeat.

Dirk Nowitzki is ageless. At 35 years old, he's averaging 21.2 points and nearly posting a shooting line of 50/40/90. Nowitzki had 28 points, seven assists and six rebounds in the thrilling victory over the Blazers on Saturday, a game which was won by Monta Ellis at the buzzer:

Yes, the Nuggets beat the Mavs twice in a row earlier in the season. But Denver falls behind Dallas for the moment thanks to a couple losses to mediocre/bad Eastern Conference squads and the Mavs' win over Portland. The Nuggets bounced back from losses to the Cavs and Celtics to beat the 76ers, and they will wrap up a six-game East road trip on Monday against Washington.

Andre Iguodala is nearing a return from a hamstring injury, and his presence will help boost a Warriors team that's having depth issues. With Iguodala out, Stephen Curry has been forced into heavy duty, as he has played at least 40 minutes in four of the last five games. That includes 45 minutes in a blowout win over the Grizzlies on Saturday.

The Suns have racked up some impressive wins this season, with the latest being a road win over the Rockets last Wednesday. Phoenix's 11-9 record is a major surprise given the expectations for this season, although missing the playoffs in the loaded Western Conference and getting into the lottery is probably more ideal.

The Hawks' two-game winning streak coincided with the return of sharpshooter Kyle Korver from a rib injury. In the last two victories, Korver went 8-of-12 from three and set a new record for consecutive games played with a made three-pointer. Here are highlights from Korver's streak:

The Black Mamba has returned, but the Lakers may take a small step back as he tries to find his rhythm after Achilles surgery. Kobe was noticeably rusty in his return to the lineup, scoring nine points and turning the ball over eight times in a loss to Toronto. However, it was great just to have him back out on the court:

The Wolves have fallen under .500 thanks to an absolutely brutal stretch of games. In the last two-plus weeks, the opponents for Minnesota have been as follows: Houston, Indiana, Denver, Dallas, Oklahoma City and Miami. There was also supposed to be a game against San Antonio in Mexico, but that was postponed.

Despite an ugly loss to the Heat on Sunday, the Pistons are starting to show some signs of life. Detroit beat Miami earlier in the week and also won in Chicago for the first time since 2006 behind 33 points from Brandon Jennings.

The Wizards had a chance to get over .500 for the first time since their opener ... and they promptly lost in overtime to Milwaukee. John Wall did have 30 points in the loss, his fourth 30-point game of the year. Another fun fact about Wall: Washington is 30.3 points per 100 possessions better when he's on the court, per NBA.com's stats page.

The Pelicans are just trying to stay afloat without Anthony Davis, who will miss at least a month with a broken hand. Ryan Anderson has tried to do his part, scoring over 30 points in back-to-back wins earlier last week, including 36 in a marathon triple-overtime victory over Chicago. But since playing 57 minutes in that game, Anderson has shot just 11-of-36 in consecutive losses.

The injuries just keep piling up in Chicago. After an emotional victory over the Heat, Luol Deng sat out a horrific loss to the Pistons at the United Center on Saturday. With Deng joining fellow starters Derrick Rose and Jimmy Butler on the sideline, the Bulls' offense was even uglier than usual. Speaking of Derrick Rose ...

The Celtics did unspeakable things to the Knicks on Sunday, notching the biggest win of the NBA season. Jordan Crawford has been en fuego during Boston's three-game winning streak, and he also had some words after the game for Grantland's Bill Simmons, a noted Celtics fan:

In this week's edition of Bobcats Defensive Improvement Watch, we note that Charlotte currently has the third-best defensive rating in the NBA. And if you needed the reminder, the Bobcats were last in that department in each of the last two seasons.

The Grizzlies are kind of sad right now as they plod along without Marc Gasol. Memphis was destroyed two games in a row by the Clippers and Warriors, with Jerryd Bayless' 0-of-11 night on Saturday epitomizing the team's offensive situation. Get well soon, Marc.

All hail Masai Ujiri! After finding a taker for Andrea Bargnani in the offseason, Ujiri has now dumped the way overpaid Rudy Gay. The new Raptors general manager likely isn't done making moves, as point guard Kyle Lowry may be the next out the door.

So yeah, Rudy Gay and DeMarcus Cousins could be quite the thing. Who knows if it'll be any good, but it'll be ... something. Gay has been maddeningly inconsistent this season and throughout much of his career, but perhaps he can inject some excitement into a team that needs some.

The Cavs have won three of four and sandwiched two solid wins over one blowout loss last week. Keeping with a trend on the season, those two victories were at home and the loss was on the road. Cleveland is a stellar 6-3 on its home court this season, but a woeful 1-10 on the road.

It looked like the Knicks had maybe figured things out. New York blasted Brooklyn and Orlando in consecutive games last week, knocking down 33 threes combined and looking like the team that won 54 games last season. But then there was the debacle against the Celtics and panic mode ensued once again.

The Nets hit rock bottom during their embarrassing loss to the Knicks at the Barclays Center on Thursday night. The injury-riddled and woefully underachieving Nets were booed repeatedly throughout the second half as first-year head coach Jason Kidd sat helplessly on the sideline. At least Deron Williams will be back soon!

The Magic continue to fade after their promising start to the season. Orlando has lost five in a row, and things haven't been pretty in those five losses. Take your pick of bad moments, whether it be the double-overtime loss to the Sixers, an embarrassing defeat to the Knicks or a Dwight Howard 20/20 game.

The Bucks have been unwatchable most of the season, but there's some reason for optimism thanks to the encouraging play of youngsters Khris Middleton and Giannis Antetokounmpo. The Greek phenom even has his own signature celebration these days:

Last Wednesday, the Jazz were riding a two-game winning streak and held a slim halftime lead over Indiana. Fast forward to Monday, and Utah has lost three in a row, including an overtime loss to Sacramento.