NBA scores: Explaining why Russell Westbrook got so mad

Why did Russell Westbrook have an emotional outburst during the third quarter of a 25-point game? We explain. Plus, some thoughts on a tight one between the Mavericks and Warriors.

Share All sharing options for: NBA scores: Explaining why Russell Westbrook got so mad

This game was pretty boring for the most part. Nobody could have expected the Grizzlies to be competitive in a road game against the league's best home team right after trading Rudy Gay. It would be foolish to make too much out of this contest from Memphis' perspective, especially because the new pieces they did receive in return for Gay weren't even in uniform.

The only remotely interesting thing that happened was Russell Westbrook's strange outburst in the third quarter. Everyone predictably downplayed the incident after the game, but it did offer a glimpse into Westbrook's emotional disposition.

He was angry at Thabo Sefolosha, and it wasn't immediately clear why at first glance, so let me try to explain.

As the Thunder came down the floor, Westbrook has already decided he wants to take Jerryd Bayless in the post. Why he decides to do that, I have no idea, but he does it a lot. Notice how he waives Kendrick Perkins away to clear the left side. 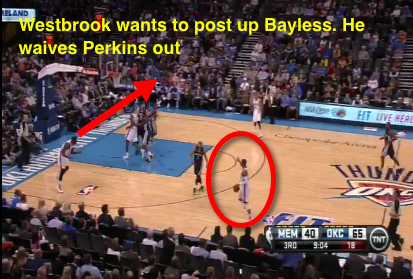 Sefolosha, naturally, is wide open here, but Westbrook is set on posting Bayless up. Maybe Westbrook is worried that Tony Allen will steal his skip pass. Who knows.

In any event, Westbrook goes into the post and, for this to work, he needs room to operate. However, Sefolosha, an instinctual player as there is in the league, notices his defender, Mike Conley, turn his head. When you see this happen, you're taught to cut right to the basket. That's what Sefolosha does. 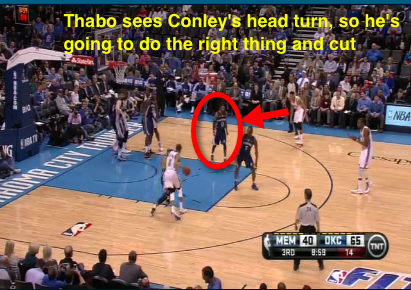 In fact, Sefolosha ends up being wide open! There's one problem, though: Westbrook isn't looking at him. 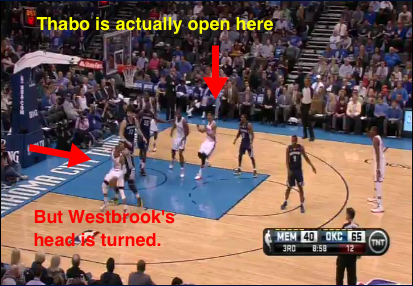 Westbrook is in the process of trying to complete a baseline spin move. By the time he aborts that play and turns back to the middle, Sefolosha is on top of another Thunder player, negating the passing lane. 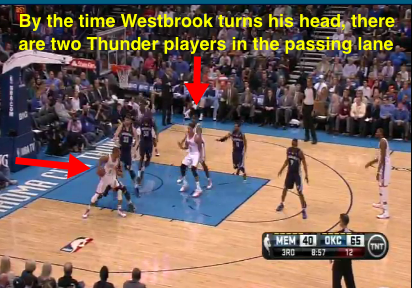 In the end, Westbrook was hit with the rare five-second call for backing down a player in the post, and the Thunder turned it over.

You can see why there was a disagreement here. From Westbrook's perspective, Sefolosha made an ill-timed cut that cramped the spacing he needed to actually make a move. From Sefolosha's perspective, he made a smart cut and his point guard didn't have the vision to find him.

It's a common timing issue you see a lot in the league, making Westbrook's outburst a little scary. But at the end of the day, the Thunder will show this to each player on film and they'll each understand how they erred. No big deal.

The Mavericks are mad at the officials, and I can understand their gripe. Two days after a go-ahead bucket was wiped away in Portland due to a bad offensive foul call, the Mavericks were victimized again when no foul was called on Brandan Wright's game-winning layup attempt. It looked like there was a lot of contact, but nothing was whistled. These losses really sting because the Mavericks need all the victories they can get if they want to make a playoff run.

Andrew Bogut looked solid in limited minutes, which is a great sign for the Warriors. Shawn Marion had 18 points and 17 rebounds, showing why he continues to be incredibly underrated.