Super Bowl Judgment: How to not drink like a chucklehead during the big game

Over the course of TAILGATE JUDGMENT, we found many faults with your drinking habits. Here, we see how you've been drinking, and give you one last chance to get it right.

Share All sharing options for: Super Bowl Judgment: How to not drink like a chucklehead during the big game

The Super Bowl is the Super Bowl of drinking. Chances are, you'll be attending or hosting a party, which implies that you'll put at least some thought into what sort of alcohols you'll be imbibing. A lot of you chuckleheads tend to choose your drinks thoughtlessly. A lot of you dingdongs lack ambition. I have decided, then, to audit your drinking habits, identify problem areas, and offer helpful suggestions.

Of course, I have plenty of data to work from. This season, we have conducted 14 TAILGATE JUDGMENT exercises, in which you reported what you had to eat and/or drink during game day and I issued judgment accordingly. In all, I received 426 reports of you consuming alcohol, and I took it upon myself to crunch the numbers.

Most of you drank beer. 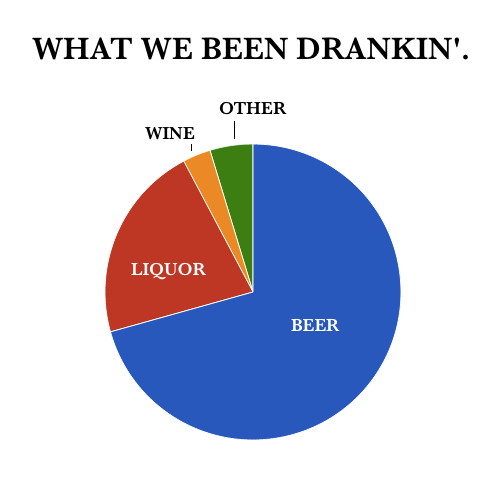 Beer makes sense: on game day, it's nice to have a glass of large quantity and relatively low ABV -- something you can drink without being hammered within two hours' time. Liquor is also useful for drinking during the game, to augment celebration, or to soften the anguish of defeat.

These are the liquors you preferred. 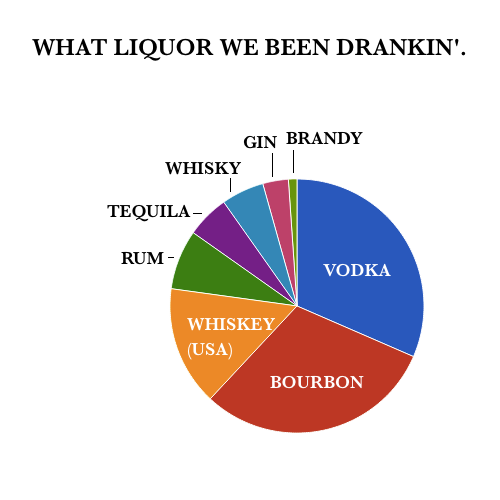 Vodka, by a nose, was your most common preference -- most of which was in the service of a mixed drink, such as a Bloody Mary. I was delighted to see so much bourbon consumed. The most popular bourbons:

As a Kentuckian, I'd like to offer some advice.

- If you're new to bourbon and would like to spend a little money (perhaps $35 or $40 a bottle, depending on where on the map you find yourself), Basil Hayden is an excellent choice. It's tasty and remarkably easy to drink, as far as bourbons go.

- Over the course of TAILGATE JUDGMENT, several Kentuckians slandered Knob Creek, implying that it was pedestrian and boring. Not true! You'll have to forgive their faux-snobbery. Knob Creek is not the greatest bourbon, but it's quite tasty and it's worth the price.

- None of you drank Ancient Ancient Age, one of the greatest bargains in the world of bourbon. You ought to be able to find it for $20. It tastes great neat or with a couple of ice cubes, and you oughtn't feel guilty about making a cocktail of it. Its little brother, Ancient Age, is surely the best-tasting $10 bourbon in existence. 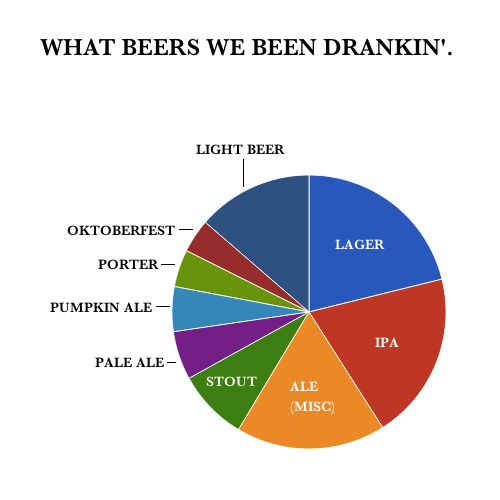 Goodness God, y'all. This is trouble.

Lagers were your preference. I understand, I do: low ABV, easy to drink. IPAs are fantastic, but I can't help but wonder whether we fixate a little too much on them. A few points of advice, which you will digest because I know what is best for you and you evidently do not:

- More stouts, please. It's a goddang shame to see stouts take such a thin slice. If it weren't for Guinness, it would be about half as thin. It's cold outside, and there is hardly a better time of year to drink a stout. Breakfast stouts, milk stouts, chocolate stouts, whatever you like. It could be argued, in fact, that stouts are the very best brew of beer. Point is, you are drinking too little of this and too much of many other things.

- I trust you no longer have any pumpkin stouts or Oktoberfests sitting around. If you come across it, don't bother with it unless it's from a trusted source (Southern Tier's Pumking and Schlafly's Pumpkin Ale are the only ones I trust). Several of you drank Blue Moon's pumpkin ale, presumably on purpose, and I really don't know how to respond to that.

- There are also too few porters on this list. There are some bad porters, of course, but find yourself a good vanilla porter. I think you'll love it.

- I recognize the utility of light beer, but in cold weather, said utility is quite limited. An ice-cold Coors Light, for example, is terrific after running around outside all afternoon on a summer day. If it's 25 degrees outside, do you really want one? It tastes like nothing. Be good to yourself. Drink a thing that tastes like a thing.

- Light beer and lager claim a third of this pie. That's a lot of mediocre drinkin', y'all. Remember that this Sunday ought to be a special occasion.

Let's get a little more specific. 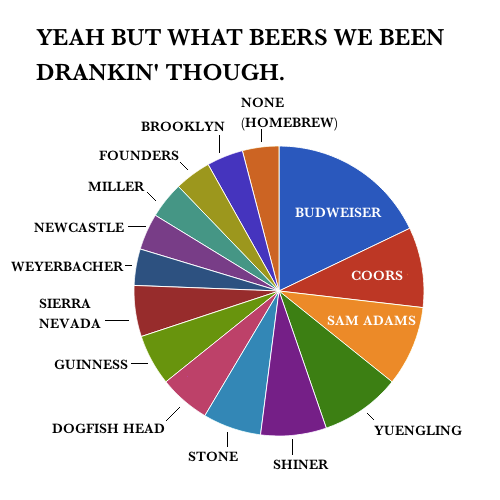 There's a whole lot of wrong going on here, too. What were you thinking? Nobody's proud of Bud, Coors or Miller, but let's go up a rung to the premium "gas station" beers:

Samuel Adams. Their Noble Pils, if you can find it, is actually a fantastic beer. The Boston Lager is widely available and fine to drink. Many of their other offerings tend to be a take-or-leave sort of venture. Sam Adams is the Starbucks of beer: you hope there's something more interesting within reach, but if not, you'll be happy it's there.

Shiner. Boring. The Hell y'all drinkin' Bocks for?

Guinness. Like everyone else on the planet who drinks beer, I enjoy Guinness. Imagine if you drank it straight from the bottle, though. That would be pretty stupid.

Sierra Nevada. I've drank 94 billion bottles of their pale ale so I can't appreciate it as I once did, but it's awfully nice to have such a widely-available ale that tastes good. Their Celebration Ale is also tasty.

Your selection of craft breweries is ... rather ... it's troubling. Stone, Dogfish Head, Founders, and Brooklyn are all great establishments, but it would have been quite nice to branch out a bit:

Southern Tier. These folks have ramped up production over the last little while, and their product is pretty widely available at this point. And yet, of the 301 beers counted, only three were Southern Tiers. This is rather inexcusable. They knock nearly every single one of their brews out of the park. Try their Mokah, if you can find it, or their 2X IPA, or their Old Man Winter ale. Anything they put in a bottle, really.

3 Floyds. This is the best brewery on the entire planet. Distribution is limited, I know, but none of you drank one of these over the course of TAILGATE JUGMENT. This is a tragedy and a great shame. If you live in the Midwest, look for 3 Floyds beer until you find it. Their Zombie Dust is my favorite beer I have ever had, period.

Bell's. Do none of y'all drink Two Hearted anymore? Too cool for that now or something? It's a really good beer.

Mikkeller. I'm relatively new to these beers, but if you find some, pick some up.

Founders. If you come across their Kentucky Breakfast Stout and do not purchase it, you should be jailed. Failing that, their standard Breakfast Stout is delicious, as are most other things they brew.

I can't end this discussion without revisiting your cocktail habits ... 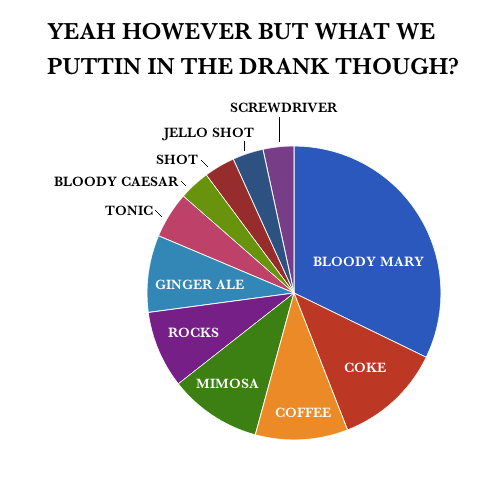 ... which are sorely lacking in ambition. I thank you for consuming so many Bloody Marys (about half of which were made with Zing Zang, the best Bloody Mary mix available). Mimosas are a great choice. Some of you were thoughtful enough to simply pour a good whiskey over rocks and leave it be. A few notes:

- You ought only to mix liquor with Coke if said liquor is mediocre-to-crummy. Personally, I would prefer ginger ale in most cases.

- I would suggest you keep your Bloody Mary simple and faithful to what it ought to be. Don't add bacon like some sort of jimmyjohn. Are you a jimmyjohn?

Your greatest transgression here is your lack of ambition. Almost none of you thought to make a fancy cocktail. There is no better occasion to start than this Super Bowl. Spend some dollars on some vermouth and bitters. Make an Old Fashioned, or a Manhattan, or a gimlet, or something. Drink as though your older sibling didn't have to buy it for you.

I leave you with that, friends.