Super Bowl recipes: Spilly made you a pie

Ready to impress your party with a delicious pie? This probably isn't it, but Spilly tried!

Share All sharing options for: Super Bowl recipes: Spilly made you a pie

Welcome to the final week of football, everyone. You all know that, in just a few days time, we'll all be thrust into the cold, depressing months of midseason basketball, early season hockey, and OCD descriptions of men in Florida tossing a ball back and forth. Sure, there's a few thrilling weeks for March Madness, a welcome oasis in the bleak spring sporting doldrums, but even that will get old after the second round. Do not fret. That's next week. Today, we've still got the Super Bowl, and I've made you a treat to take to all of your parties over the next week. I've baked you a pie!

Those of you who are regulars will notice that I've already done meals for San Francisco and Maryland recently, having used Rice-a-Roni, Sourdough, and Crabcakes. I didn't want to repeat myself, so I used a few ingredients I didn't think to use the first time, as well as some other foods that represent each team, color wise. Alright, let's begin.

STEP 1: For the pie crust, I did some research on foods that originated in San Francisco. One thing I never knew was that San Fran was the (hotly debated) home of the fortune cookie. That seems easy enough. So your choices are to find a bag of fortune cookies, or order thirty-six bags of General Tso's. Do as you wish. 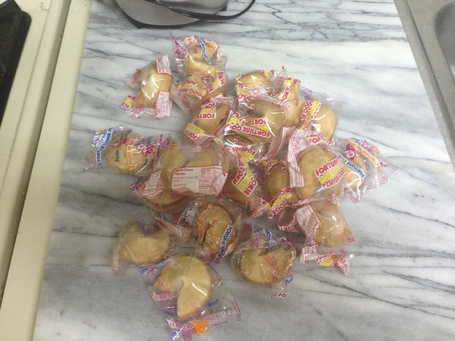 STEP 2: Pile these (without the plastic!) into a blender so we can turn it into pie dough. Leave the fortunes inside. That way when you're eating a slice, you're also consuming the hopes and dreams of minimum-wage fortune writers all over the world. Also, bonus fiber. 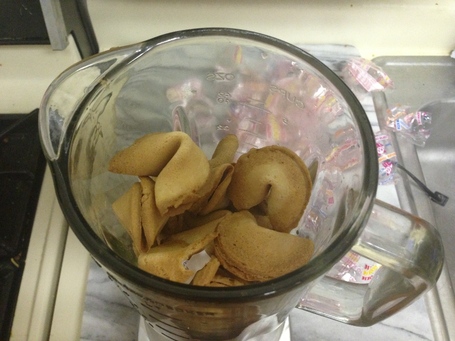 STEP 3: To turn the crumbs into a dough, I recommend adding something cool and creamy to thicken. 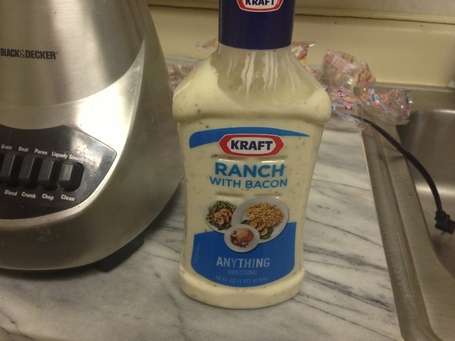 FOODTIP: Never tell me "Anything". You know not what horrors you will unleash. 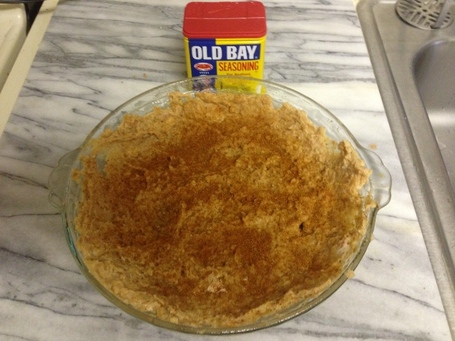 STEP 5: For the filling, I decided to choose two foods for each team that matched their colors. Sure, it's a cop out. It shows no real culinary knowledge of the areas and it's the foodie equivalent of cheering for a team based on which jersey is the prettiest. (San Francisco's). 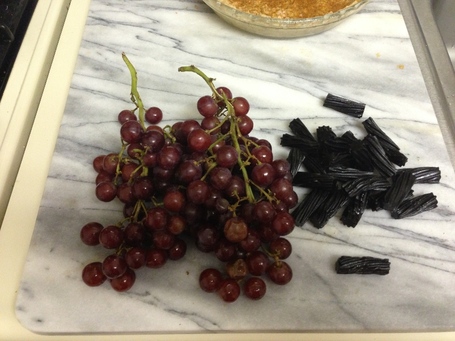 Hold on a second, that's...not even that disgusting. Those are grapes and licorice. Why, there's not even any fake cheese or beef anus or bile!

Toss them in the blender. You could pull off each individual grape....or...you could just toss the branches in there too. Yeah, just do that. It's a natural ingredient! When it's done, pour the slop into a bowl. 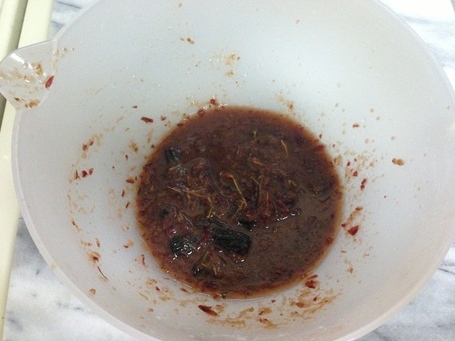 There you go. Liquified Baltimore.

STEP 6: Next up is the 49ers. I couldn't decide whether to use meat or something sweet for the red item, so I figured, why not both? 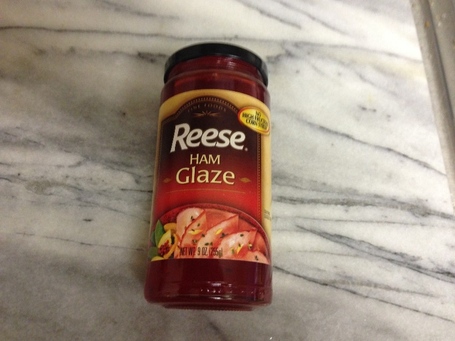 Sadly, I was misinformed. I believed this would be liquid ham that you could use to glaze anything: toast, ice cream, or Big League Chew. Turns out it's FOR ham. No matter - it's red enough for our needs, so throw it in the bowl.

STEP 7: For our last ingredient, I will be using a food that is easily my most hated culinary substance. I've used a wide range of terrible food for this column, but I have never once used the item that, even when simply opened, will cause me to vomit 30% of the time. Yes friends, our gold food is: 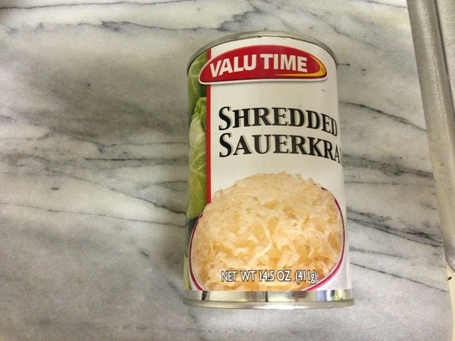 I hate sauerkraut. I hate it so very, very much. It's a mutilated cabbage soaked in the moribund nightmares of malevolent and soulless men. Eating sauerkraut is like swallowing a cruise missile of treachery. Put a pile of briny sin into the bowl and weep openly. 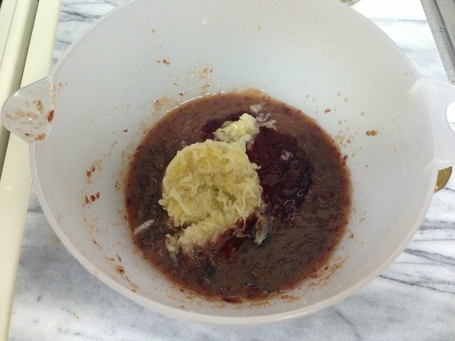 STEP 8: Mix everything up until it's evenly distributed. Then pour this into the pie crust from earlier. Gas masks are encouraged from this point forward. 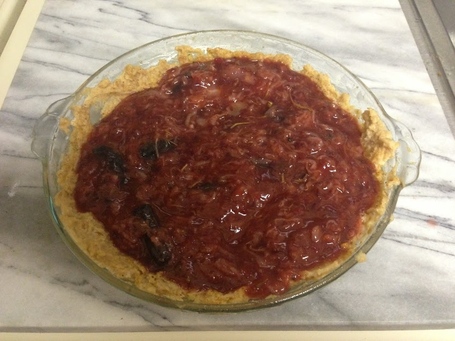 STEP 9: Place this into an oven. Leave your house. The smell of sauerkraut boiling among licorice and hamjelly will pollute your entire living environment. Go to the store and buy twenty seven glade plugins and pine trees. You will need all of them. Paint will begin peeling from the walls, so be aware of this. Keep the pie in the oven as long as you can before neighbors call the police.

When you are finished, and the house is fumigated, you will end up with this: 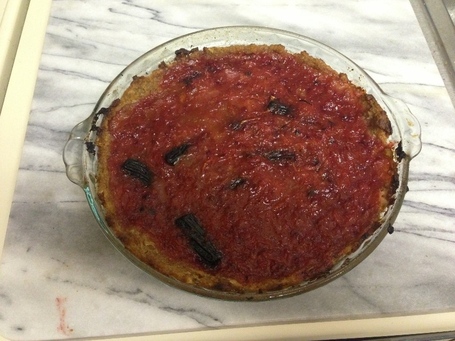 STEP 10: As you remove it, the pie will be boiling. Let it sit for a day or two and then cut a slice out. Take a picture and post it onto the internet along with this recipe. Revel in schadenfreude knowing someone out there will attempt to make it. 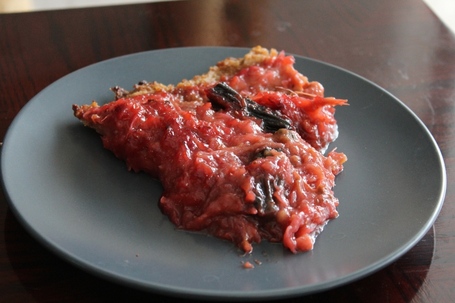 ENJOY THE SUPER BOWL, EVERYONE