The beleaguered netminder let in five goals in his second start of the season.

Poor Rick DiPietro. Living under the shadow of your 15-year, $67.5 million contract can't be easy. Especially when you have to live in a house made out of marshmallows just to keep yourself from getting injured every day. (That's an unconfirmed rumor that I just made up.)

The veteran (can we really call him that when it seems like he's only played three games in ten years?) goaltender made his second start of the season for the New York Islanders on Monday, and it went worse than the first. This time, he let in five goals on 30 shots, and the Islanders lost to the Carolina Hurricanes, 6-4.

Fans weren't happy when he let in Carolina's fifth of the night. As DiPietro stared blankly ahead, the fans rained down "DiPi sucks" chants down on him. (By the way, if you're the organist, don't you stop playing music once you realize the fans are using your tune as a jeering device?)

Meanwhile, John Tavares' reaction on the bench at the end of the game said it all. 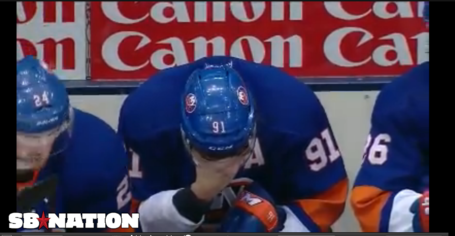