How Ty Lawson learned to tune out the noise

It's no secret Ty Lawson struggled to start the season. Now, he's leading the Denver Nuggets like the $48 million man he is. The key to Lawson's revival? Remembering to just be himself.

Share All sharing options for: How Ty Lawson learned to tune out the noise

"It depends when you're asking me that question," Karl said. "Now, I think he's great. I was ready to strangle him about six weeks ago."

Six weeks ago, Lawson was averaging 13.6 points per game, shooting 40.8 percent from the field, 30.8 percent on three-pointers and 69.2 percent on free throws. At the time, the Nuggets were 17-15 with a brutal schedule that saw them play 22 of their first 32 games on the road.

Lawson had a scoreless night in mid-November, shooting 0-for-7 against Miami. In early December he scored two points on 1-for-10 shooting in Indiana. To close out 2012, he scored three points and made only one of his seven attempts in Memphis. Before the new year, Lawson had numerous late-game blunders and made just 36.3 percent of his fourth-quarter shot attempts.

It was the worst stretch of the fourth-year point guard's career, and it came on the heels of signing a four-year, $48 million extension to stay in Denver a day before opening night.

"Ty's in a position where he goes through a contract situation and I think he came into the season a little distracted," Karl said. "There are not many players in this league who can be very successful distracted and unfocused. This game is a mental game as much as it is a physical game."

Lawson said that earlier in the season he was "probably listening to other people's influences." For someone known for aggressiveness, decisiveness and improving incrementally from year to year, this was surprising. Receiving that raise, he was supposed to challenge for an All-Star spot, not find himself falling backward. 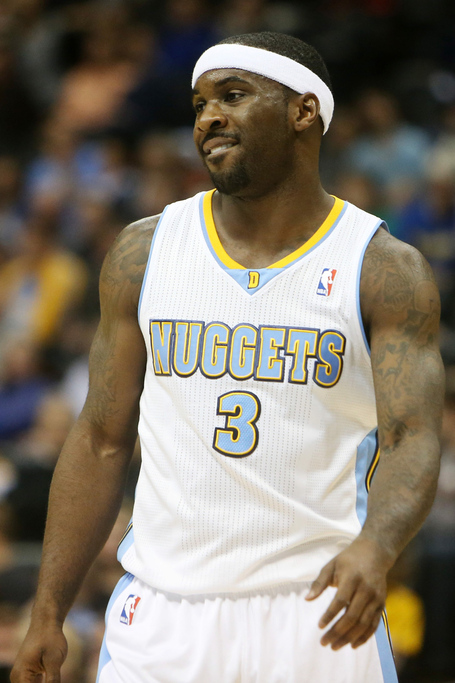 Since January, though, Lawson turned his campaign around like a hapless defender on a fast break. If he started the season the way he started 2013, he could be playing in this weekend's main attraction in Houston. The shift in that span has been staggering: 18.9 points per game on 48.8 percent shooting, 44.3 percent from behind the three-point line, 80.6 percent from the free throw line. In the fourth quarter, he's shooting 59.7 percent. When his team needs him to create, he's getting the looks he wants and converting them.

"[It's] just probably getting used to the teammates, finding out where I can get my shots at and just taking more shots, being more aggressive, more confident in my shot," Lawson said. "And I think just personally playing my game instead of second-guessing myself."

When Lawson plays his game, Denver wins a lot of them. They'd won 15 of 17 before their two recent losses, and those losses weren't exactly embarrassing. Sunday, they fell 118-114 in a triple-overtime thriller in Boston, with Lawson scoring 29 points and dishing nine assists. Those figures were identical in Toronto on Tuesday, a 109-108 loss with Andre Iguodala, Danilo Gallinari and Wilson Chandler missing in action and JaVale McGee getting hurt after five minutes of playing time.

Lawson is piling up points the same way he did in prior seasons: with quickness. In transition, he's impossible because he will beat you to the basket and protect the ball going up. In the halfcourt, he's a handful because he will penetrate into the paint, either finishing or finding someone who will. If you try to take away his drive, he will gladly take the open jumper. Describing the pressure Lawson put on his team's defense, Raptors head coach Dwane Casey dropped his head down, shook it and sighed as he reached into his memory bank.

"I'm telling you, he's one of the fastest with the ball I've seen in a long, long time," Casey said. "I remember a kid at Southern University, Avery Johnson, when I was coaching at Kentucky. I thought he was the fastest at a young age. 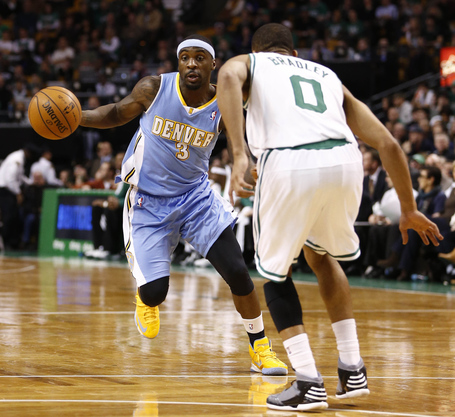 Lawson seems even faster because he has different speeds. When he's racing around, he's in control. The Nuggets play at the league's second-highest pace, and lately, he's been the leader they need.

"I think if I start off slow, the team starts off slow, so every game from now on I'm trying to push the pace, get in the paint," Lawson said. "If the basket's there for me, I'm going to knock it down, but if not, then I'm going to pass it out to one of them for an easy shot. I take pride in trying to set the pace for this team and I'm going to continue to do that."

Denver's 22-3 home record is fourth in the league and at 33-20 overall, the team is only one game back of home court advantage in the playoffs in the Western Conference. If the Nuggets are going to grab that fourth seed, Lawson will be out in front driving them there.

"We play off of him," Denver center Kosta Koufos said. "He's our leader, he's our point guard and he does everything right and he leads by example."

On the final play of the game at the Air Canada Centre, Lawson found himself with the ball 40 feet from the basket with three seconds on the clock near the left sideline. Turning on the jets, he managed to create a 17-foot shot on the other side of the court before time expired. It rimmed out and he fell to the floor in defeat. As soon as he hit the ground, opposing point guard Kyle Lowry helped him up and had a few words for him.

"He just said 'keep balling,'" Lawson said. "I guess right now I'm playing well and he [was] just like, ‘Keep playing hard and just keep balling, keep your head up.'"

With his early-season struggles a distant memory, he has already shown the ability to do just that.