We ask the important question: which dinosaurs would play what positions on a football field?

Because it is the football offseason, we should really all talk about other things. Let's all agree not to do that though, and instead continue to talk about football, most importantly about a question that has bothered mankind for centuries: if you were drafting a football team from a roster of dinosaurs, which dinosaurs would you take at each position?

We asked Joe Sertich, Curator of Vertebrate Paleontology at the Denver Museum of Nature and Science, this important question. He answered, and did so in detail.

Quarterback, Gigantoraptor. He has all of the tools to be a multi-tool weapon. Huge arm, fast feet, turn and cut on a dime, plus the size and long neck to see over the immense line. Plus, has a built-in helmet to prevent concussions. As a close relative of the big-brained dromaeosaurids, or "raptors," Gigantoraptor also probably has the intelligence to handle the position.

Wide Receiver: Ornithomimus, Struthiomimus. These fleet-footed ostrich-mimics have the straight-line speed, cutting ability, and importantly, the reach to be the ideal WRs. Long arms and a runner's body, huge eyes for great vision. The ideal receivers.

Fullback: Triceratops. Elephant-sized, speed, and a head covered with horns and a shield make him the ultimate lead blocker able to plow a path for RBs. 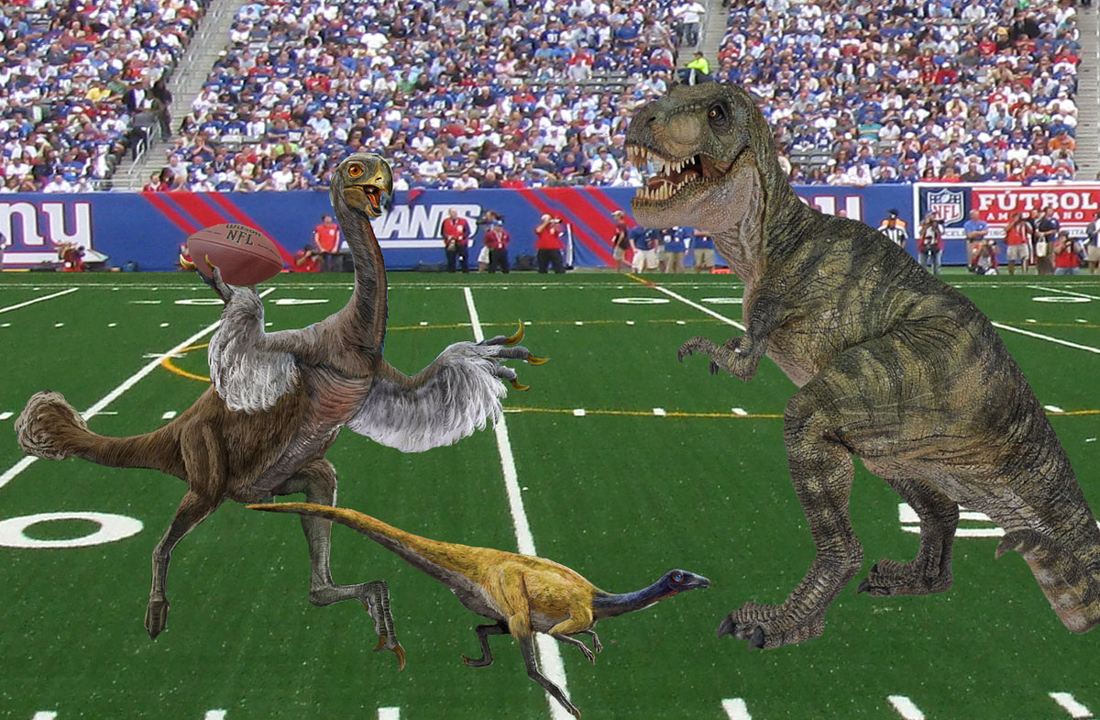 Running back: Utahraptor. Largest of the "raptor" dinosaurs has the speed and cutting ability, paired with bulk. Huge claw-tipped hands help him hold onto the ball to prevent fumbles.

Tight End: Therizinosaurus. Huge bulk to block when necessary but also huge hands (claws more than three feet long), perfect for catching a football. Would be the perfect receiver if it had speed.

Right Tackle: Diplodocus. Huge size but a little leaner than the left tackle. Long body to protect the edge at nearly 100 feet long.

Left Tackle: Apatosaurus ("Brontosaurus"). Immense size to protect the edge at about 60,000 pounds.

Center: Stegosaurus. Large size but with low center of gravity, and ability to quickly pivot to protect the QB or pull on runs. Can stand up into tripodal stance to gain leverage and has spiked tail for extra protection against inside rushes and blitzes.

Free Safety: Pachycephalosaurus. This large dome-headed dinosaur would be a hard hitter able to cover ground quickly and lay a hit but also cover speedy receivers. Unfortunately, lots of penalties for using the crown of his head.

Strong Safety: Lambeosaurus. This crested duck-billed dinosaur has the bulk to play the run, but the speed to cover tight ends.

Cornerbacks: Velociraptor, Deinonychus. Both of these "raptors" have superior speed and jumping ability, in addition to long arms and hands. Able to intimidate the larger wide receivers.

Inside LB: Tyrannosaurus Rex. Speed and bulk make him the ultimate defensive weapon. Hard-hitting, head first style. Would have been a QB if he had an arm. 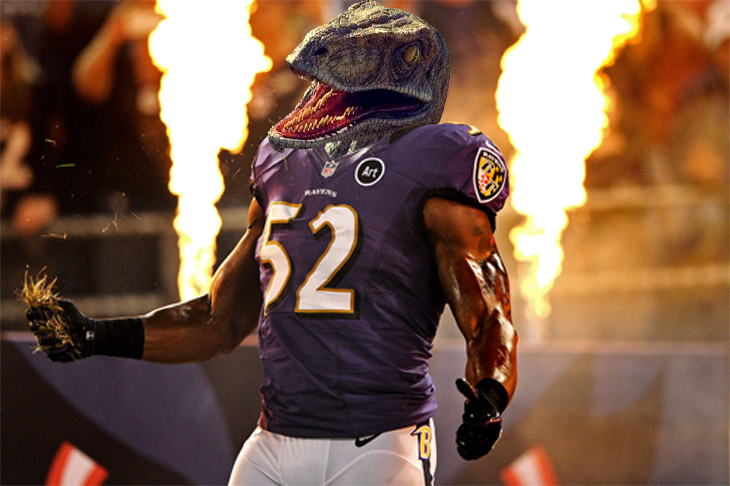 Note: not a T-Rex head, but you try fitting it in the frame with Ray Lewis' upper body.

Outside LBs: Allosaurus, Carnotaurus. Perfect combination of size and speed. Strong hands and arms for allosaurus, powerful legs and horned head for carnotaurus. Both with nasty attitudes. Able to fight off blocks, drop into coverage or rush the QB with vicious claws, teeth and powerful legs

Kicker: Parasaurolophus. Duck bill dinosaur with powerful legs plus the benefit of a trumpet-like crest to announce kick-offs.

Punter: Iguanodon. Huge hind limbs for booming kicks, but also has thumb spikes and a mean streak for emergency tackles.

Wedge buster: Pachyrhinosaurus. Hard charging, with the surprising speed and the bulk to get around blocks. Huge head dome for absorbing impacts and plowing through blocks.