The Oklahoma City Thunder light up the scoreboard against 28 of their 29 opponents, but consistently struggle against the Miami Heat. Why is that? It's because against the Heat, their greatest strength turns into their biggest weakness.

But Thursday night's 110-100 loss to the Miami Heat happened because that high-powered offense was completely stymied by Miami's pressure defense. In the process, the Heat exposed the one issue with Oklahoma City's attack: its lack of fluidity.

Against 28 other teams, the overwhelming one-on-one talent of Kevin Durant and Russell Westbrook is enough to allow the Thunder to thrive. Sometimes simpler is better, and few exhibit that better than the Thunder. You can run all the complicated plays in the world, but few are more effective than simply giving the ball to Durant in the mid-post and letting him go to work.

Miami's defense is predicated on creating scramble situations to force turnovers and get the opposing offense out of rhythm. To beat the Heat, you need to move the ball quickly and make decisions on the fly. They want you to take an extra second to think about where the ball should go, because that's all they need to close down the passing lane. Whenever the Thunder play the Heat, they too often take that extra second, or more, to think about the next move, ruining offensive flow and playing right into the Heat's hands.

Let's take a few examples from Thursday's defeat. In all of these, keep an eye on the shot clock in the lower right-hand corner.

We'll start with this play from early in the game, because it exhibits a lack of fluidity in every way possible. In this first screenshot, Westbrook is holding the ball on the left wing, having let six seconds go off the shot clock. It's really not clear what play the Thunder are trying to run, so Westbrook dribbles and dribbles, waiting for something to happen. 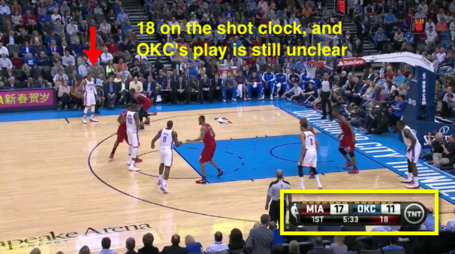 Four more seconds pass before it becomes clear that the Thunder want Durant to screen for Westbrook. The Heat trap, but instead of making the quick read to run to the open spot, Durant ... comes to the ball. 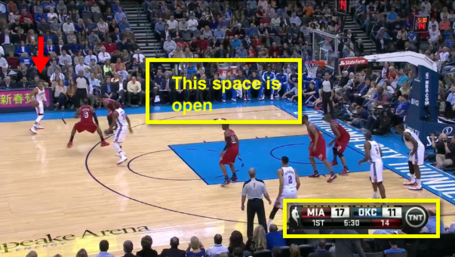 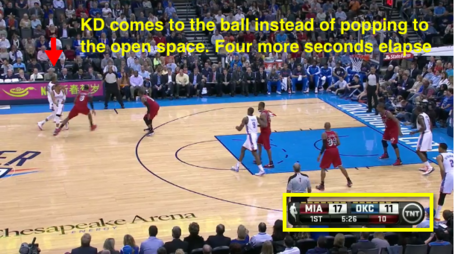 All in all, this process takes eight seconds. That's a third of the shot clock wasted because the Thunder's two stars couldn't make a quick decision to react to Miami's trap. Eventually, with the shot clock running down, Durant feeds Serge Ibaka on a pick and pop that goes nowhere. 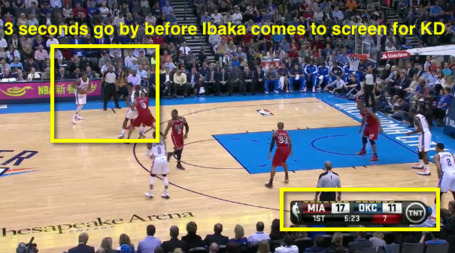 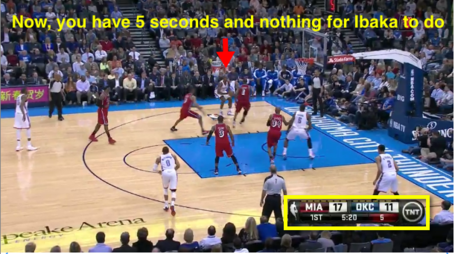 Here's another play early in the second quarter that led to a Durant turnover. This is a simple set that calls for Reggie Jackson to screen for Durant popping up to the top of the key, but look how long it takes for the actual play to be initiated. 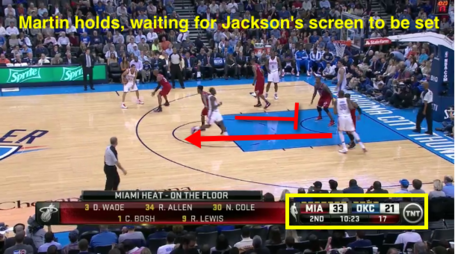 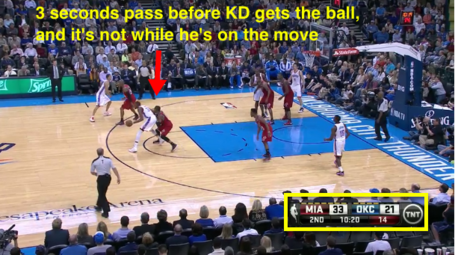 It takes three full seconds for Jackson to set the screen and for Durant to get open enough for Martin to give him the ball. Worse, by the time Durant catches it, his defender has caught up to him, meaning he must reset and survey the defense again before making his move. This is exactly what Miami wants because it allows Norris Cole to position himself in Durant's path going to the basket. 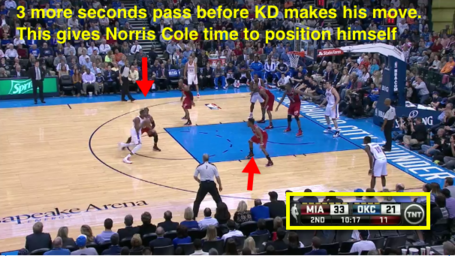 Cole leaves Jackson open in the corner, but the Heat are doing this on purpose because they figure Durant is driving to score, not pass. As it turns out, they are correct, and Durant doesn't notice Jackson open until it's too late, leading to a turnover. 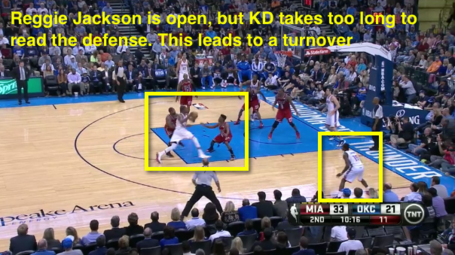 Once again, the Thunder's stars aren't reading the defense quickly enough to move the ball and beat their pressure. If you hesitate just a little bit, it's too late against Miami. But this concept also applies to cutters, which we'll see in this play, along with more slow decision-making from Westbrook and Durant.

This set begins with Westbrook dribbling aimlessly at the 16-second mark. He's wasted eight seconds by pounding the ball, so the flow is already off. 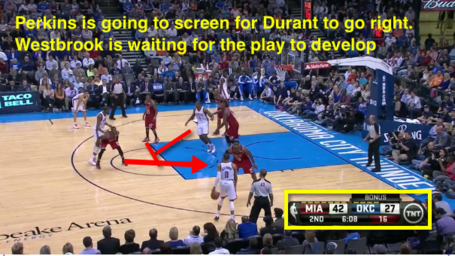 From there, things continue to develop slowly. It takes Perkins two full seconds to move four feet and make contact with Durant's man on the screen. Then, it takes three full seconds for Westbrook to actually get Durant the ball. 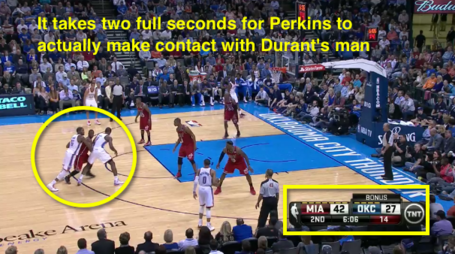 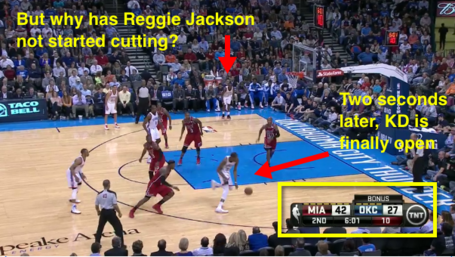 At this point, Reggie Jackson needs to cut backdoor to get a layup. His man, Ray Allen, has left him to help on Durant, and Chris Bosh has yet to rotate down to cut to the basket. For the Thunder to score here, Jackson has to beat Bosh to the basket. Instead, he waits to cut until Allen actually finishes his rotation to Durant, and by then, Bosh has him beat. This eventually leads to a turnover. 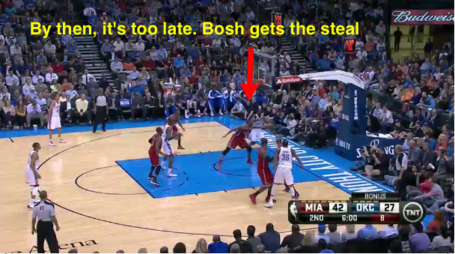 To the Thunder's credit, things did get better in the second half once they committed to playing small. There was more open space on the court, and Durant took advantage with more decisive drives to the basket that beat Miami's rotations. But it was far too little, too late, and as good as Durant is, the Thunder cannot beat the Heat with Durant isolating and going for 40 every game. They need to add some fluidity to their offense and make quicker passes that beat Miami's rotations.

Until they do, they will always match up poorly with Miami.