Meet the man who painted LSU tiger stripes on a Lamborghini

Don Domingue painted tiger stripes on a Lamborghini, and the rest is SEC fan history.

Share All sharing options for: Meet the man who painted LSU tiger stripes on a Lamborghini

Don Domingue of Lafayette, LA is the only man on the planet who saw a Lamborghini Gallardo and thought, "You know, that could use some LSU-themed tiger stripes." While waiting to shoot a video in the car at LSU, he spoke with us about the Lamborghini, its paint job, and the time someone danced on its roof at Mardi Gras when he wasn't looking.

SH: And your job?

DD: I don't really have a job. I have some businesses. They don't require that I be there on a regular basis. I used to have a job as a financial consultant for 25 years.

SH: That works. You now have the free time to do things like buy a Lamborghini Gallardo. How long have you had the car?

DD: About a year.

SH: Did you buy it knowing you were going to paint it in LSU colors?

DD: No. I drove it a while, and saw the yellow when I was watching a football game and noticed that the helmet color was the same color as my car, and I just put two and two together. I thought my car would look cool with some purple tiger stripes if I took it to the game. Just so happened we had three home games in a row coming up--Alabama, Mississippi State, and Ole Miss--and I thought I'd put the stripes on, go to the home games, and then after a few months take 'em off. I didn't realize the reaction they would get. Nobody wanted me to take the stripes off after that.

SH: When you went to the people who did the paint job: did they think you were insane, or did they just nod along and do it?

DD: Yeah, they kind of questioned it. But they weren't gonna refuse money, you know? 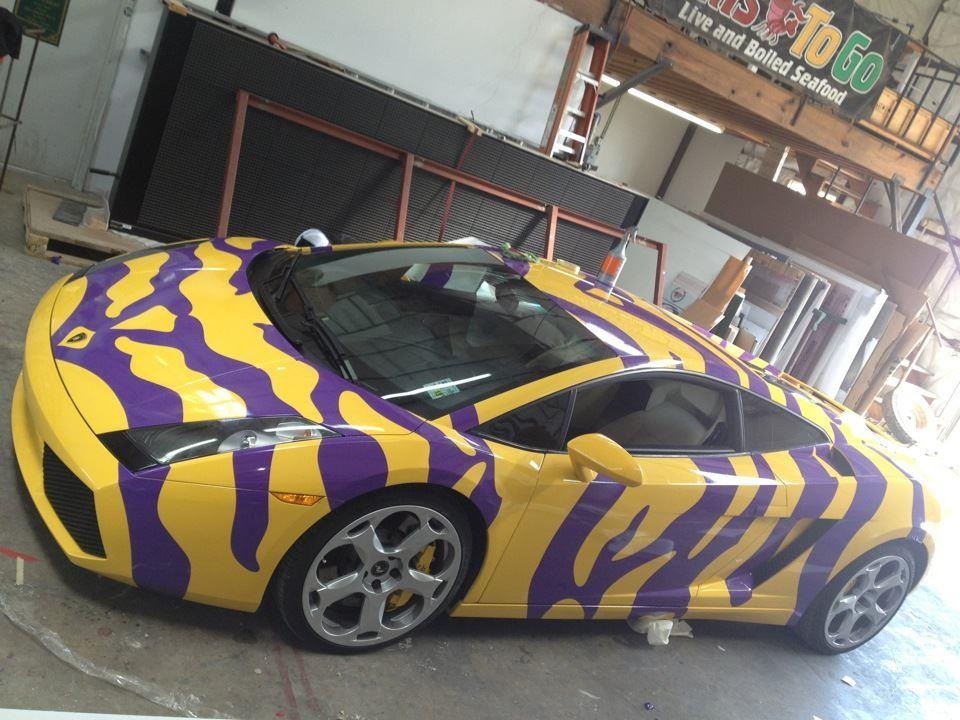 SH: What was the first time the reaction to the car made you think, "Whoa, I've done something here?"

DD: When I drove up at night and these people were surrounding me in every direction, and flashes were going off, and I was like "Man, what's going on?" Kind of felt like I was a movie star or something. I went to Mardi Gras, and the Super Bowl, and it was the same thing. Everyone just turns their head and starts taking pictures. There are like forty people around me taking pictures right now.

SH: You're a Saints fan and have a black Mercedes. Is that getting its own treatment?

DD: Someone did ask me about that, and I said it as kind of a joke. But how do you do a Saints car? Put Fleur-de-lis all over it?

SH: Have you heard from anyone at LSU about it? Like, coaches, players, administrators?

DD: No. I thought I would at least get some special parking privileges or something, but no. In fact, one of the campus policemen pulled me over out of bumper to bumper traffic and accused me of driving drunk. I haven't had a drink in years and years. I had to do a field sobriety test, and passed, of course. They said would have to ticket me for open container because my passenger had a drink in a koozie. It was a Sprite. The cop started stuttering and let us go. So getting pulled over chugging down Nicholson, that's it. A problem is what I got from LSU.

SH: So you're saying campus police will harass anyone, even a successful alum in a school-themed Lamborghini?

SH: Do you have to shoo people away from the car sometimes?

DD: Most people are really polite, ask permission to take pictures, etc. Anyone can take a picture of it. But there are some people who aren't. One of the stripes in the back was torn off by some vandal when I wasn't watching. At Mardi Gras, when I parked and went inside to use the restroom, someone told me that someone jumped up on the roof and was dancing on top of my car. People just run up and jump up on the hood sometimes. No one's damaged it yet, though I have found footprints on the door from where people have tried to kick a dent in it. There's a lot of jealous people out there. 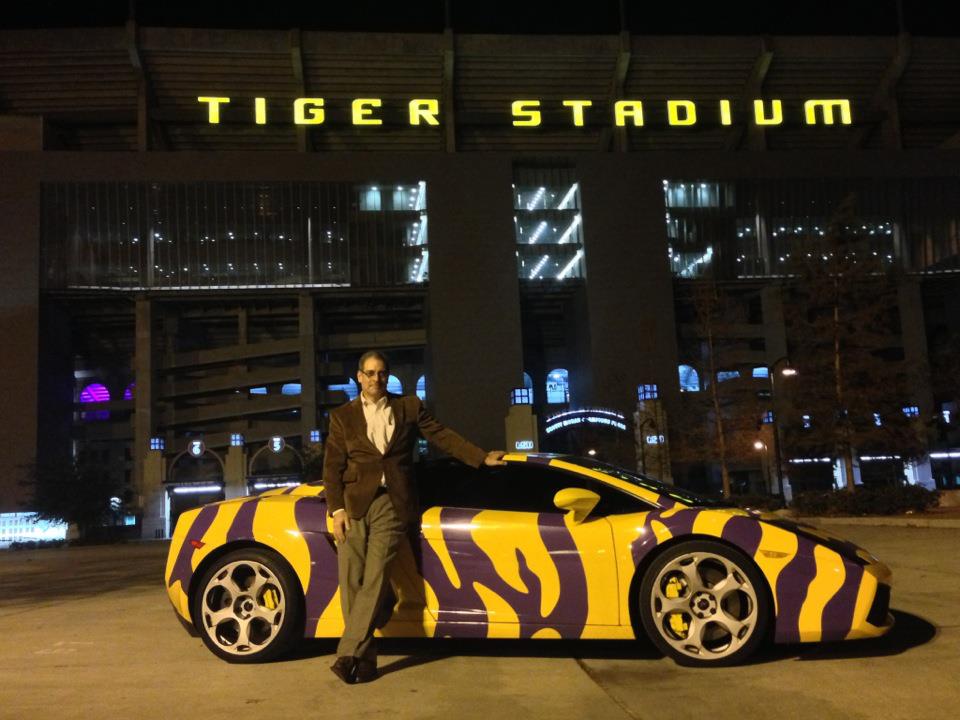 SH: Would you risk an SEC road trip with it? Would you drive it to Tuscaloosa or Oxford?

DD: Probably not. That's a long drive, and the mileage on this thing would bring the value down a lot. Home game are good for that. Now, if someone could carry it behind a motor home or something, well, sure. I'd do that.

SH: How fast have you gone in it?

DD: I'd rather not incriminate myself.

DD: I'm not saying, but that'd be a good guess.