Let's celebrate the legendary running back's 77th birthday with a look back at his underrated acting career.

Turns out February 17 is a pretty good day for athlete birthdays. Michael Jordan, the greatest basketball player of all time, turned 50. Football fans had a birthday to celebrate too as Hall of Fame running back Jim Brown turned 77.

Even the NFL's younger fans know Brown. Statistically proven to be one of the best running backs in history, Brown defined the ideal of the super star running back.

I'm old, but I wasn't quite a twinkle in my father's eye when Brown was chewing up opposing defenses during his career. I do remember watching NFL Films highlights of Brown on Sunday's as a kid, but I owe my fondness for Brown to Saturdays, watching pan and scan reruns of Brown's campy action movies.

In honor of Brown's birthday, here are my five favorite movies from an acting career that probably deserves its own corner in Canton.

This is Brown's foray into Blaxploitation. He teams up with Jim Kelly and Fred Williamson, another football player turned actor, to stop nefarious neo-Nazi leader Monroe Feather and his sidekick scientist from poisoning the water supply with a chemical that affects only African Americans.

By today's standards of Django Unchained, this probably seems tame and maybe a little dopey. It was actually fairly popular, and is one of the more successful entrants in the genre. Kelly and Williamson both had some serious karate skills, especially Kelly who made his name the year before this flick came out in Enter the Dragon. Brown more than holds his own with his general arsenal of badassery. 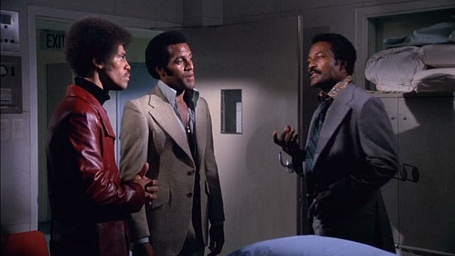 I'll confess to a weakness for Westerns, and Brown's first movie probably wouldn't make this list if a bona fide film critic were making it. As Sgt. Franklyn, Brown is a member of a disparate group of soldiers tasked with stopping insurgent Apaches armed and directed by a vengeful ex-Confederate colonel. Sound familiar? Ragtag soldiers stopping unwitting insurgents manipulated by an entity out to destroy the American Way was the plot of every Western released just as the Vietnam War was heating up. If you want proof of just how much the country changed in the 1960s compare the Westerns of 1964 with those if 1969.

Brown turned in a solid effort in his acting debut. His lines were limited, but he was the group's conscience. At one point Brown's Sgt. Franklyn urges the outfit's leading officer to be better than their enemies. He also saves a baby! The part you probably most remember is Brown and two of the other protagonists get dragged behind horses while being beaten by the natives.

I'll spare you a lesson in 60s history. Hum Jimi Hendrix doing "All Along the Watchtower" and play the clip reel in your head of the rise of the counter culture and a country playing out an existential crisis in the jungles of Southeast Asia. This is one of those late-60s, radical chic westerns mentioned above.

Brown's a lawman chasing none other than Burt Reynolds, whose mustache has yet to reach its full potential. Eventually, Brown, a disgruntled American lawman, spurns his master and teams with Yaqui Joe (Reynolds) and Raquel Welch's sexy peasant princess to liberate oppressed peoples, Mexico having firmly been established as Hollywood's proxy for Vietnam by this point.

Cutting through the cliches in this one can be difficult, and the schlock pretty much subsumes Brown's character. Nevertheless, he exudes the quiet determination that made him the game's greatest running back and a solid presence on the screen. To me, this is the movie I most associate with Brown the actor.

Action of the sake of action, there's not much else to it, except for getting a rise out of the square world with a rough love scene between Brown and Welch. The love scene doesn't quite live up to the controversy it created in Nixon's America.

Because everything in a 1967 film had to have some kind of obvious political undercurrent, Brown's character has been sentenced to death for, you guessed it, manslaughter in a racial scuff that the court labeled as murder. He and Charles Bronson are the two convicts that blur the lines between good and bad, unlike Telly Savalas' rapist.

Cleveland Browns owner Art Modell promised to fine Brown for missing training camp while he was in London shooting the movie. Instead of returning to the states to practice, Brown just called it career. He was 30. A year earlier he earned the league's MVP award with 1,544 rushing yards and 17 touchdowns.

"I quit with regret but no sorrow," he said that day. "I've been able to do all the things I wanted to do, and now I want to devote my time to other things. And I wanted more mental stimulation than I would have had playing football."

Like most of the group, Brown gets offed by the Germans, but in the most fitting way possible. With the Nazi officers sealed in a bunker, Brown jukes his way over the top of the building, dropping grenades into the air vents. Machine guns mow him down as he sprints to the stolen armored car that will carry the convicts to freedom. He's running! The running back is running! Take that Art Modell, you square!

This was Brown's second feature film, and the one that really put him on the map as an action star.

I appreciate the reality that you probably had better things to do on Saturdays than watch middle-tier movies from the 1960s. But if you haven't seen Sucka, it's a real problem.

Brown reprises his black action star role as half of the dynamite duo Hammer and Slammer. He's Slammer. Isaac Hayes is Hammer.

Now would be the time to recite the film's most portable dialog scene, "how much for just one rib," featuring Chris Rock. In that scene, Slammer is every Jim Brown character: a man who lets his outsized presence do the talking. And even like the conscience-bearing soldier of Rio Choncos, it's Slammer that prevents an angry Hammer from decapitating Rock's single rib seeking punk ass. We could get all meta and say something it being the perfect, post-modern moment in Brown's career. Let's just enjoy the scene instead.