Just your typical run-in between Rudy Gay, Wale and the Toronto announcers

Things got weird in DC.

Share All sharing options for: Just your typical run-in between Rudy Gay, Wale and the Toronto announcers

So, let's see if we can explain this. D.C. rapper Wale was at the Wizards-Raptors game tonight and, from the look of things, got into a little verbal battle with Raptor/Baltimore native Rudy Gay.

Toronto announcer Matt Devlin then took it upon himself to take a few playful jabs at Wale, calling him exactly that (a "local rapper"), mispronouncing his name and unfavorably comparing him to Drake (video via Beyond the Buzzer):

Wale got wind of this, was not pleased, and immediately got to menacing Devlin on Twitter (the most menacing way to menace):

He even got up and accosted the booth (photo via @jeskeets): 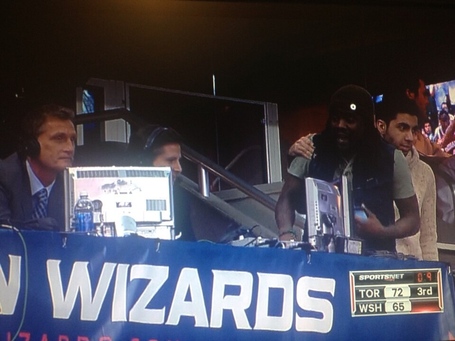 It all ended with a shoutout to the T dot and a suggestion that the conversation with Gay wasn't earnestly hostile, though, so I guess we're good. Gay finished with 24 points in Toronto's win over the Wizards, by the way.

Me and @wale was just joking y'all. Thats my boy right there.