How drunk can you get in one day in New Orleans? Pretty drunk, actually.

The Sazerac and milk punch at Commander's Palace had me reeling by noon. The gator po-boy at Guy's offered some necessary ballast, but chugging a hurricane at Pat O'Brien's knocked me back on my heels. The next stop was SoBou for Baltimore- and San Francisco-themed shots, where my producer told me I didn't have to actually shoot them if I didn't want to. Not a chance: one ounce of Fernet Branca, one more of Guinness and red absinthe, and I accepted the taste of Abita Mardi Gras Bock to cleanse my palate. The bartender there said I needed to try a REAL hurricane -- made with passionfruit, hibiscus, and three kinds of rum -- and I said okay. She put it in a go cup, and I took it out onto Bourbon Street. I went into a voodoo shop that was bullshit because they refused to hex Ray Lewis or anyone else, but the guy read some tarot cards. The Super Bowl will be close, he said, and a woman will make it hard for the Seahawks to eclipse the 49ers in the NFC West. Tarot cards are stupid yet convincing. We needed video of me eating regional food, so I went into the Gumbo Shop and ordered jambalaya, étouffée, shrimp creole, and gumbo. The four dishes tasted roughly the same, but that may have had something to do with the 15 or 20 ounces of liquor in my system. We went back to our rented house on Esplanade and I told everyone I was drunk. I laid down and went to sleep.

Once more, slowly this time: 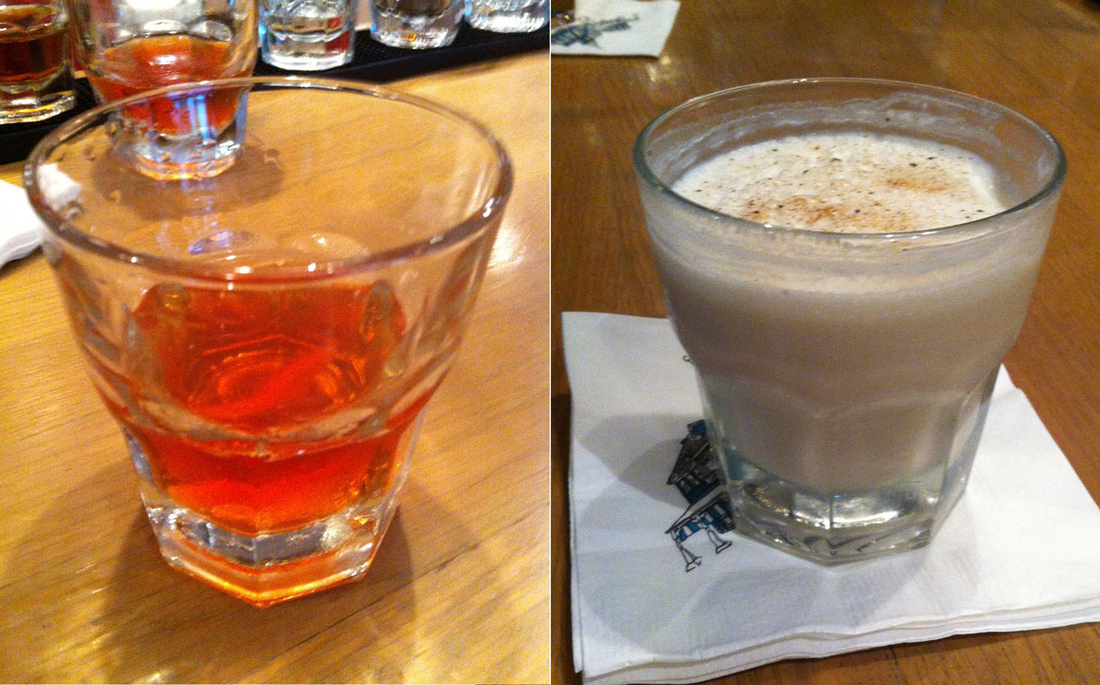 Commander's Palace is a cornerstone of the New Orleans food culture, renowned as one of the world's best restaurants and the place that launched Emeril Lagasse and Paul Prudhomme into the mainstream. At 11 in the morning, it smells like heaven: a mix of butter, sugar, and vanilla that puts any bakery to shame. Standing outside Commander's Palace in the morning feels like standing inside the world's richest cinnamon roll.

I am not, however, here to eat. The cheerful hostess escorts our video crew through the kitchen to the bar, where I'm supposed to sample two of the more refined New Orleans cocktails: the Sazerac and milk punch. Any refined drunkard knows the Sazerac: the world's first true cocktail, first made in the 1800s as a cure-all. It remains that today, assuming a wash of absinthe with two ounces of rye, sugar, Peychaud's bitters, and a twist of lemon on an empty stomach has healing properties. As a whiskey lover, I'm inclined to love Sazeracs, but in my liver of livers it will always be third after the Old Fashioned and the Manhattan.

As a breakfast cocktail, milk punch -- a Mardi Gras favorite -- is the way to go. It isn't the most enticing name for a drink, but brandy (or bourbon), milk, simple syrup, and vanilla topped with nutmeg is a concoction so smooth and sweet that I can understand how people who consume it during a parade end up exposing themselves. I leave Commander's Palace less than sober. It's just past noon, and I desperately need food to keep me upright.

Enter the gator po-boy at Guy's. 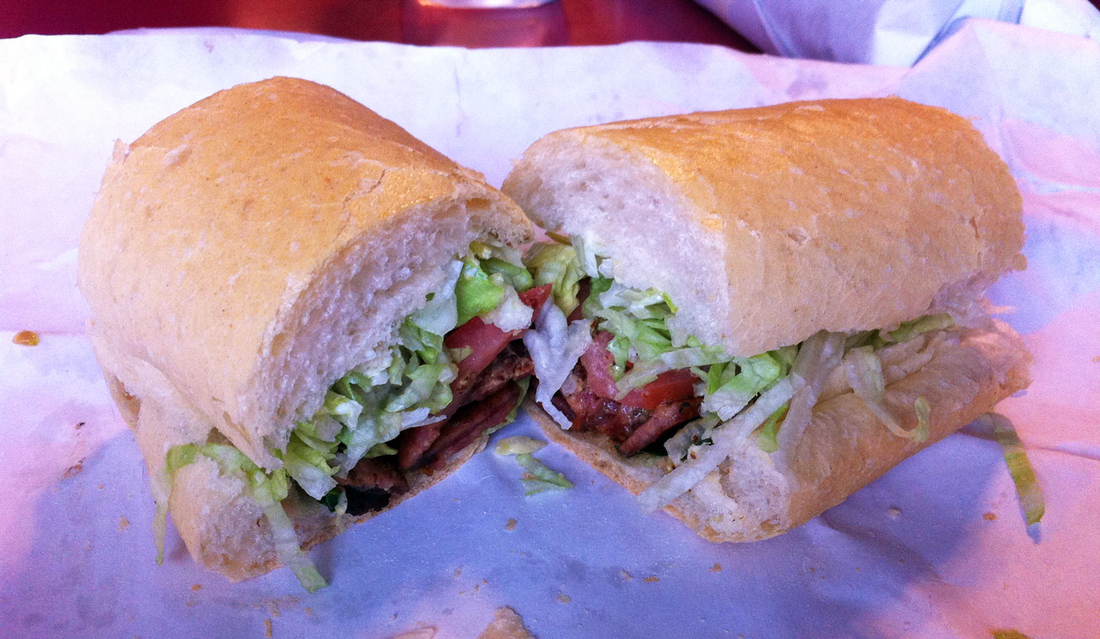 If you've eaten deli sandwiches around the country, it may be hard to understand what's so special about a po-boy. Strictly by definition, a po-boy isn't markedly different than a hoagie, hero, grinder, sub, or whatever the local parlance calls it in your neck of the woods.

Two things in particular make a po-boy different than your average American sub: the meat filling and the bread. Fried catfish, shrimp, and oyster freshly caught from the Mississippi River or Gulf of Mexico are common options, and my alligator sausage hit a beautiful note: more flavorful than turkey or chicken but lighter than pork or beef. Even common roast beef gets a New Orleans twist: the sandwich is filled with "debris," morsels and char that fall from the meat and soaks in fat while it roasts, something that the Times-Picayune once called "the bovine equivalent of a sandwich made of nothing but fried chicken skin." The French bread is the unifying component: the texture change of a single bite -- crusty bread, shredded lettuce, then gator sausage -- was possibly the most satisfying aspect of the po-boy at Guy's.

(A NOTE FOR NEW ORLEANS RESIDENTS/EXPERTS: I am aware that some people think Parasol's makes the best roast beef po-boy, while others deem Parkway's superior. I've heard around town that Domilese's is the place to go for shrimp and oyster po-boys. Mother's is lauded for its debris po-boy, though many claim that it's overrated. I spoke to one local who dismissed Guy's as a "tourist trap," even though it was filled with locals when I was there. So please, Person With An Opinion About Po-Boys, rest assured that (a) your opinion is a beautiful delicate snowflake and (b) it has no impact on my enjoyment of the gator po-boy at Guy's.)

Dangerously sober, I went to the Quarter to get drunk like a tourist. 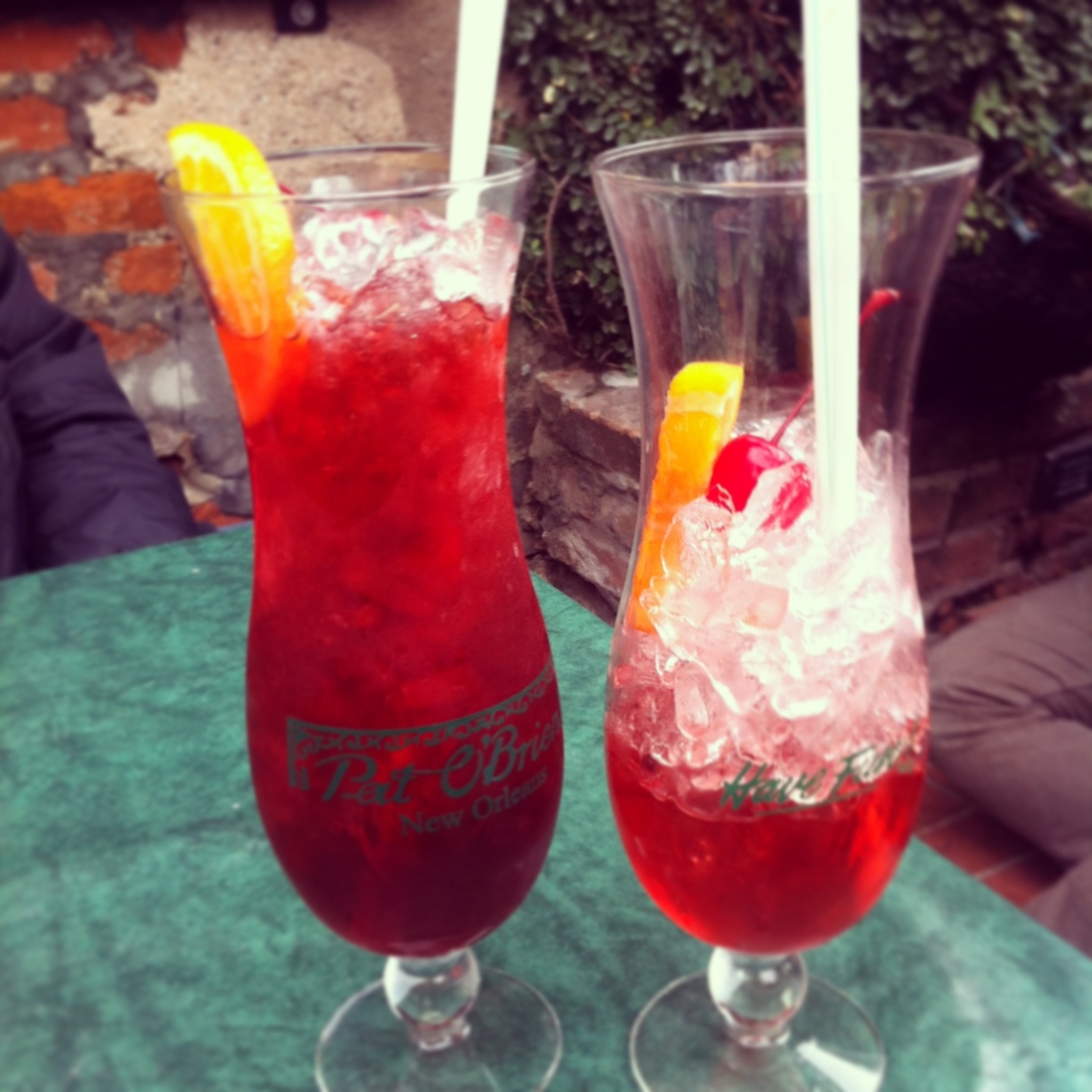 Bourbon Street businesses work in the medium of tourist drunkenness, and the easiest money is making a drink with a reputation. The Steak Pit has Huge Ass Beers. Tropical Isle boasts that the Hand Grenade is New Orleans' strongest drink (at the very least, it is the only one with a grenade mascot standing outside the bar). But today's poison is the Hurricane at Pat O'Brien's. Some guiding principles:

To be clear: the Hurricane at Pat O'Brien's is complete and utter swill. For all the booze dumped into it, the flavor profile is best described as "red, plus sugar." Hurricanes are famous only because people get famously drunk off of them. Unless you're in a drinking competition of some sort, imbibe more thoughtful drinks.

The desire for thoughtful drinking leads us to SoBou, an upscale bar smart enough to make shots that honor both the Ravens and the 49ers. Abigail, the bartender who will walk us through the Baltimore- and San Francisco-themed shots, introduces herself and makes some small talk about the weather. It was so warm last night, she says, she went skinny-dipping in her back yard. Okay then.

But what ARE those shots? For Baltimore, it's Guinness and a touch of red absinthe. How does this represent Baltimore, you ask? I believe it has something to do with Edgar Allen Poe, and also SHUT UP, ASSHOLE, WE DRANKIN'. Abigail has better reasoning for the Niners shot (an ounce of Fernet Blanca) something she calls "the bartender's handshake" for the way it unites service industry workers around the country -- and more specifically, the San Francisco region. This may be complete bullshit, but Abigail was naked in someone's pool last night, so I'm inclined to trust her judgment.

The Fernet tastes better than Guinness and absinthe; thus, I will root for the 49ers this weekend. Is that what this is about? Football? Or was it about food and booze? I no longer remember. My face no longer registers touch, and my tongue can't discern the difference between étouffée and shrimp creole, despite the better efforts of the Gumbo Shop.

It's not food worth writing about, but it's food that keeps me alive long enough to get to bed. To stay alive. To do this again tomorrow. In New Orleans, you always make the same mistakes.