In the NBA, players try desperation shots from beyond half-court hundreds of times each season, and only about 1 in 100 make it. Nowhere else in sports is something so futile attempted so often. And when it works, it is a revelation.

Vince Carter once hit eight consecutive three-pointers in a playoff game. He won the 2000 Slam Dunk Contest, one of the most memorable in the competition's history, with an impossible-looking between-the-legs dunk. In the Summer Olympics, he leapt over a 7'2" defender to issue what the French still call "le dunk de la mort" (the dunk of death).

None of his achievements on a basketball court, if you ask with me, were more ridiculous than this one.

While screwing around in practice, Carter executed one of the wildest sporting achievements I've ever seen: he hit a shot, from 86 feet away, while sitting flat on the court. "Achievement" is the wrong word, actually, because it was more of a miracle.

If you and Kobe Bryant shot free throws, he would make a lot more than you would. If y'all backed up to the three-point line, he would still sink far more. But as you backed up further and further, to half-court and beyond, both your success rates would eventually slope off into negligible territory. His qualifications as a basketball player would matter less and less until they didn't matter at all, and if he hit one -- as Mr. Carter did above -- I would just as soon credit it to luck as I would his skill set.

In the world of sports, nothing so staggeringly unlikely is attempted so often. It's a lottery, and everyone plays.

FUTILITY IS FOR EVERYONE. 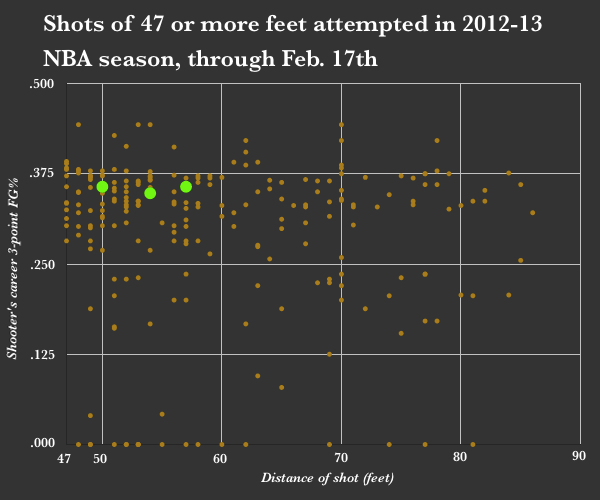 The three green dots above represent the backcourt shots in the 2012-13 season that have actually hit (Jarrett Jack from 57 feet, Eric Maynor from 54, and Toney Douglas from 50). The missed attempts belong to all sorts of folks. Stephen Curry, one of the best long-range shooters in the game, has tried four. Corey Brewer, who is well below the statistical average from beyond the arc, has chucked up six of them.

Derrick Favors, who has never made a three-pointer in his three-year NBA career, has tried it twice this season. In fact, 18 of these shots were put up by guys who have never, ever made an NBA three. We know why, of course. Practically every half-court shot happens because the game clock is about to expire, and whoever happens to be holding the ball at that moment had best chuck it up. Besides, the rate of failure is so enormous that frankly, it barely even matters who takes the shot.

Well, unless it's Baron Davis.

This, from February 17th, 2001, is the longest successful shot in NBA history.

The Hornets' Jamal Mashburn inbounded to Baron Davis with 0.7 seconds remaining in the third quarter. Eighty-nine feet from the rim, and with a defender on him, Davis launched the ball with flat feet. The aim and velocity were perfect, as was the arc of the ball; it appears as though it flew about 30 feet above the court at its apex. Davis shattered the record for longest successful shot attempt, and that he did so a) on a catch-and-shoot, and b) while contested is completely bewildering.

Over the course of his 13-season NBA career, Davis has attempted 12 shots from half-court or further, and sunk three of them (he also hit from 47 feet that November, and from 49 feet in 2007). That sample size is decidedly limited, but it's about the most we can hope for, and a .250 percentage from that range is one that many NBA players would gladly take from anywhere beyond the arc.

Baron Davis is the only player to hit a shot from at least 85 feet in a game. It's been attempted a total of 40 times since the year 2000, and I bet they could try 400 more times before we saw another.

A shot of 47 feet or greater requires improvisation. The jump shot will not save you. Here are some shot styles used by players who have found themselves in these desperate straits.

This is the most common backcourt shot style, and the one I've always tried from 50 feet out while shooting around on a court (never, ever successfully, ever). If the shooter has a couple seconds to spare, this allows him to shorten the distance to the rim, bust out of traffic, and add some much-needed power behind the shot.

The upward flourish at the end gives it a higher arc, which is tremendously important. A line-drive jumper from mid-range might find the net, but all else being equal, that shot would stand a greater chance of banging out if it's being fired out of a cannon 50 feet away.

This is also a fine shooting style because it feels more like a basketball shot than anything else. You're facing the glass, you can aim, and you can move as you would if you were making an eight-foot runner down the lane. You just gotta chuck it, is all.

Sometimes, though, you don't even have the three seconds you need to stomp up-court. You have exactly the amount of time it takes to grab the ball and chuck it into oblivion like it's a grenade that just fell into your foxhole. No squaring up, no aiming, no nothing. You're just a component in an assembly line.

Players try this one a lot, with a success rate as low as you're imagining. It's almost done as a courtesy. Imagine what it would look like if the pitcher on the losing team had to trot out and pitch the bottom of the ninth, and you have some idea of the emotional climate involved.

One evening, with about a second remaining and down by three, this was the only shot the Detroit Pistons had time for. Appropriately enough, I'm naming this shooting form after one of the most memorable players of our generation.

Given the efficacy of the long-distance bomb, the defenders are probably best off if they don't contest the shot, lest they be hit with a foul. More often than not, a team will concede the shot and allow the enterprising gentleman to ply his craft.

Our halfcourt-or-further shooting percentage of .013 would surely drop far lower than that if all these shots were actually defended. Some of them are, and quite well; in this case, defender Tracy McGrady did just about everything we could expect him to do.

It wasn't enough, of course, because he was guarding Baron Davis, Backcourt God. Davis' spin accomplished two things: it created space, and it allowed him to put a little more power behind his shot. It didn't really allow him to take aim, though. I have no god-danged idea how this happened.

Shot in question:
Baron Davis, Hornets
11/23/01, vs. Magic
47 feet (Note: that's the officially-listed distance in the play-by-play report, but it certainly appears longer than that.)

Some long-distance shots defy everything I understand about the universe and how it works and how things move around in it. This is one of those.

Zoran Planinic carved out a relatively obscure three-year NBA career with the Nets in which he averaged about 10 minutes per game. He's responsible for a 77-foot, buzzer-beating three -- as far as I've been able to determine, that's the second-longest bucket in NBA history behind Davis' 89-foot bomb.

This one's all about the form, though. Planinic's release was lightning-quick, and he looked as though he set the basketball in a tray and pushed it through airport security. If viewed in a certain context, I would probably believe this footage was somehow faked. I haven't gotten around to marveling at his success, because I'm still trying to figure out how the Hell he got the ball that far, that quickly, with that form.

As I looked through all the long-shot videos I could find, I noticed a pattern: often times, a teammate can be seen celebrating the shot before it's even hit the net. 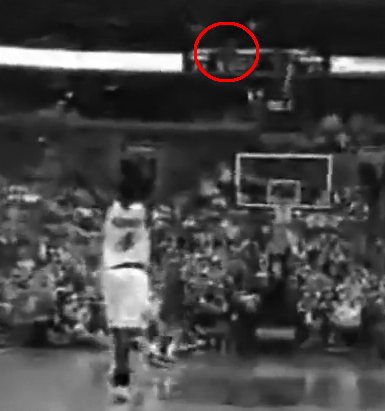 When Mo Williams shot, his teammate knew it. 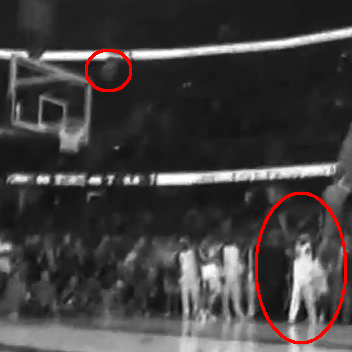 When Baron Davis shot from 89 feet, Eddie Robinson knew it. 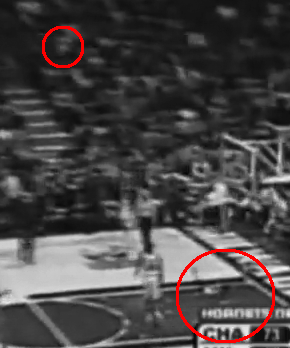 And when Grant Hill shot, Jason Richardson knew it. 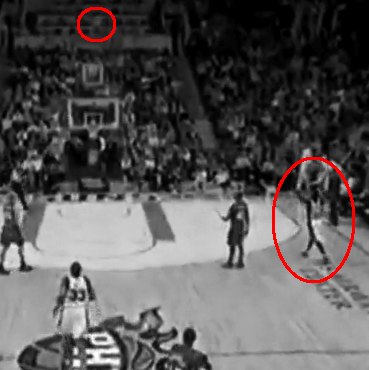 Yes, certainly, maybe they're just hoping for it to go in, but I prefer not to think that way. These shots are miracles, because:

The ones that actually fall surely do so because they're guided by the basketball gods. And when they are, I guess, you just know.