If you can find disruptive front-seven talent and craft an offense that is at least semi-efficient and competent, the Joey Jones "Alabama Lite" approach to winning in Mobile could work out pretty well. Schedule, starters and more below.

South Alabama's defense was actually pretty decent in 2012, all things considered. Despite rampant inexperience and the upgrade from FCS to FBS (not to mention that whole "This football program didn't exist until 2009" thing), the Jaguars fielded a competent 3-4 defense much in the mold of the program that, until 1968, played a home game a year in Mobile: Alabama.

The Jaguars wasted solid defensive performances because of a total lack of offensive effectiveness, but the approach was solid. USA attacked well with linebackers Jake Johnson, Enrique Williams and Pat Moore, along with end Alex Page -- the four combined for 41.5 tackles for loss -- got to the quarterback on passing downs, and stood up reasonably well to the run.

Despite being a newbie to the FBS ranks, the Jaguars only allowed more than 38 points once and allowed close to the national average in points per game. And when defensive coordinator Bill Clark left to become the head coach at Jacksonville State (and took his defensive backs coach with him), USA head coach Joey Jones looked to Tuscaloosa for his replacement. Jones brought in Alabama's director of player development, Kevin Sherrer, as his new D.C. and added former Bama linebacker Freddie Roach to the staff. Jones' approach and intent here are obvious. Now he just needs to find a Barrett Jones, an Eddie Lacy and an Amari Cooper to bolster the offense. Good luck with that.

2. There is value in experience.

One thing you notice in looking at South Alabama's putrid offensive numbers below: The Jaguars were ridiculously young last year. All of last year's passing yards, all of the rushing yards, and most of the receiving yards are back in 2013, and the line returns 61 career starts. With this level of returning experience, improvement is all but guaranteed. But "improvement" is not necessarily the same thing as "competence." There is probably still a ways to go here.

The defense returns almost everybody as well. That's exciting. USA must replace Johnson, an all-conference middle linebacker, but most of the front seven's other disruptive forces are back, as are interesting corners Darrius Morrow and Tyrell Pearson (combined: four interceptions, 18 passes broken up). If Clark and Johnson can be sufficiently replaced, improvement on both sides of the ball is a possibility.

In three straight November contests, South Alabama allowed 28 points or fewer and lost by 10 or fewer points. The offense just couldn't produce enough and wasted quite a few solid defensive performances. And then, predictably, the defense gave in. The Jaguars allowed 948 yards and 75 points in the final two games of the season.

The best way for a young team to prove it is ready to take a couple of steps forward the next year is to take at least one step late in the season. South Alabama certainly did not do that, and in the end, despite the defense, they were closer to 0-13 than they were to 4-9. 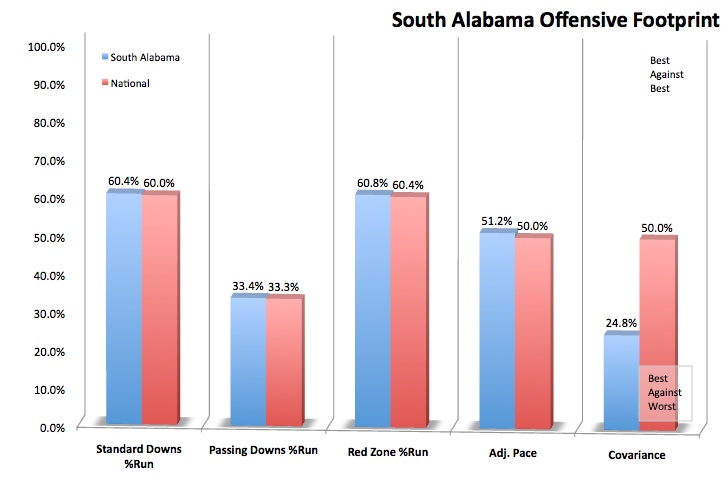 4. Quarterback was the least of South Alabama's concerns.

Virginia transfer Ross Metheny and then-sophomore C.J. Bennett combined to at least provide semi-competent quarterback play. They each completed about 54 percent of their passes, with equal touchdowns and interceptions. These aren't good numbers, but they're just good enough to conclude that USA's biggest problem came when the ball was not in the quarterback's hands. Demetre Baker could be a useful running back, and Jereme Jones could be useful as a possession receiver, but for the most part there just wasn't nearly enough skill position talent.

Of the nine returning players listed above, six are at least 290 pounds and five are at least 6'3. This isn't enormous by any means, but it meets the minimum requirements. That said, if it could figure out how to open a few more holes for Demetre Baker and company, that wouldn't be a bad thing. Baker had almost no room to run on standard downs, and this offense isn't nearly talented enough to fall into passing downs too often. 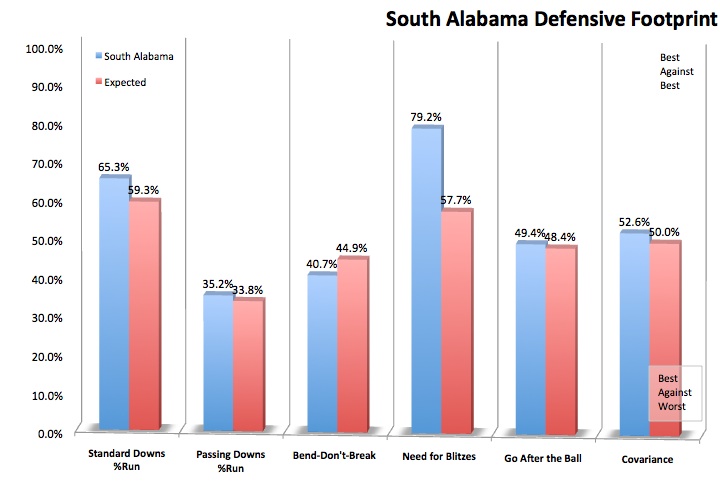 6. The defense wore on you.

You have to commend South Alabama for knowing what it wanted to be on defense and sticking to it despite the consequences. USA attacked you, made you inefficient, and forced you to rely on big plays. The Jaguars also allowed you to convert quite a few big plays. The success rates above are some of the better you'll find among the mid-major ranks. But USA was a little too leaky in the secondary; if you got past the first wave of USA defenders, you wouldn't find much resistance in the second.

In an attempt to plug the leaks, Jones has brought in quite a few junior college transfers on the defensive side of the ball, including four defensive linemen and two defensive backs.

Now, "exciting" isn't necessarily the same as "good," but you won't find many mid-major defenses this capable of making plays and rendering you inefficient. The loss of Jake Johnson is a big one, but that's pretty much it. If the JUCO transfer up front can help take attention off of Alex Page, and if Enrique Williams and Pat Moore can keep flying off of the edges of the offensive line, the excitement level will still be there in 2013.

8. Chappie Chapuseaux could be missed.

Kicker Michael Chapuseaux was a little sporadic, but he had a big leg and made some big kicks for USA in 2012, including the one that beat Florida Atlantic. He was also rock solid on kickoffs, and he was the only USA player to attempt a kick last year. He is the only primary departure in the special teams unit, but he's a pretty big one.

9. There aren't any slam dunks here.

South Alabama should expect to beat Georgia State and perhaps win one or two against the batch of Tulane, Texas State, Troy, Navy and Western Kentucky. But the chances are good that the Jaguars will have to scuffle through another iffy season with few wins. The good news, however, is that last year's team was so young that this team is also pretty young. So the experience and improving talent base could be pretty nice in 2014.

If you can find disruptive front-seven talent and craft an offense that is at least semi-efficient and competent, the Joey Jones "Alabama Lite" approach to winning in Mobile could work out pretty well. It likely won't in 2013, but there is plenty of growth potential.