Facing the Memphis Grizzlies for the first time since being dealt to Toronto in January, Rudy Gay had a tough time against his former team.

Share All sharing options for: Rudy Gay's first game against Memphis Grizzlies does not go well

TORONTO -- About three weeks after the Memphis Grizzlies sent Rudy Gay to the Toronto Raptors to kick off trade season, they met at the Air Canada Centre. It wasn't pretty.

Neither team scored for the frenetic first three minutes Wednesday. The score was tied 4-4 more than halfway through the opening quarter. Toronto shot 4-for-20 in the first, 5-for-15 in the second and the Grizzlies held a 43-32 halftime lead with their top three offensive options -- Zach Randolph, Marc Gasol and Mike Conley -- shooting a combined 4-for-21.

"The first half was unbelievable," said Memphis coach Lionel Hollins. Of course he would say that.

The Grizzlies play aggressive, physical one-on-one defense -- their "bread and butter," as guard Tony Allen put it more than once postgame -- and are second in the league in defensive efficiency. They have the West's fourth-best record despite a below-average offense that plays at a snail's pace. The Raptors put a run together in the second half and tied the game with four minutes remaining, but Memphis got some stops and held on for an 88-82 win.

"It was an exciting basketball game," Hollins said of the contest in which both sides shot under 37 percent and combined for 13 fast break points. "There was a lot of emotion, there was a lot of intensity from both sides. It was really like a playoff game." 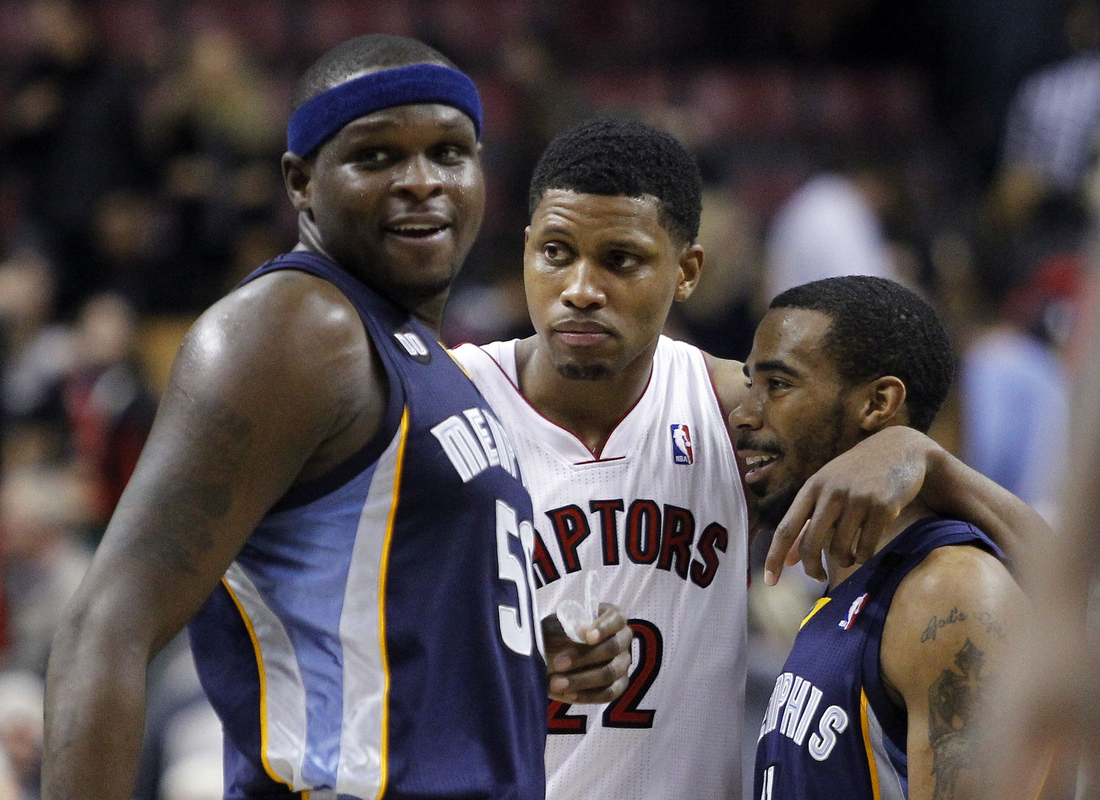 For Gay, it was "emotional, a little bit" to play against the team with which he spent the first six and a half seasons of his career. It also didn't seem like much fun. His first made basket was a desperate three-point attempt at the end of the shot clock more than halfway through the second quarter. It was the first of two three-pointers he hit off the glass on a night where he shot 5-for-15 and turned the ball over five times.

"They weren't going to let Rudy get going," said Toronto coach Dwane Casey. "They were double teaming him on pick and rolls, they were sending help quickly, they made it tough on him. I felt for him because I knew he wanted to do well, but every time they were just rotating bodies against him and if he went into a pick and roll, here comes a crowd, here comes a blitz."

Gay is the clear No. 1 option in Toronto and the team has been reliant on him since his arrival. They'd won five straight coming into the game against the Grizzlies, and though Gay shot only 35.6 percent in that stretch, the team scored 110 points per 100 possessions with him on the court and 98.8 with him on the bench. Against Indiana and against Denver, he hit nearly identical game-winning shots, the latter at home with the crowd chanting his name.

"[Gay] gives us a bonafide scorer, a guy that gives us an opportunity to create on his own, create his own shots, who is established," Casey said. "Our other guys, we're developing, we're building these guys. DeMar [DeRozan] was on his way, he's still in that process but Rudy's an established scorer in our league and he makes a difference. And when other teams are making runs, things get stagnant, you don't have to call a lot to get a shot. He can create his own."

"They've been playing well and they're coming together," Hollins said. "I think they've solidified their rotation a little bit and obviously Rudy is a big part of that. He's a guy that can go get his shot and he fills the stat sheet. Every time I look at a box score he has his 20-plus shots and 20-plus points and so many rebounds, so many assists, so many steals ... so that's what he does."

What he does wasn't as essential in Memphis this season, with Grizzlies playing through Gasol and Randolph in the post. Alongside those two, Gay didn't have much space with which to operate on offense and often found himself having to hoist up jumpers late in the shot clock. With that role and more than $37 million owed to him over the next two seasons, Gay and the salary cap-conscious Grizzlies had reason to part ways. Inserting Tayshaun Prince into the starting lineup has actually improved their efficiency, and the win against the Raptors was their fifth in a row.

"They're the same," Casey said. "They don't have Rudy's scoring ... But their style of play is still the same, inside out. Gritty, grab, aggressive, defensive-minded. Still the same team."

While the Grizzlies have an identity, the Raptors are searching for theirs. They've shown some signs over their recent stretch of wins but are still 24th overall in defensive efficiency. At 22-33, they are five games out of a playoff spot in the East. Casey, a defense-first coach, said instilling his principles in his team is all about repetition.

"We preach it all the time - toughness, hit first, first to the floor, all those cliches that you hear we talk about," Casey said. "I'm sure guys are rolling their eyes when they hear it all the time but it's true. It's true in any sport. I don't care if it's hockey, baseball, the aggressive player wins. The guy that hits first wins. The guy that has leverage wins. We're trying to preach it where it's a habit. And we lose it, we're not there yet but we're trying to get there."

Having seen what it takes as the Grizzlies went from the lottery to the playoffs, the hope is that Gay can lead them there. But as it was in Wednesday's game, Toronto is playing catch-up.

• NBA Trade Deadline: What to expect from all 30 teams

• The Josh Smith Debate: Is J-Smoove actually worth it?