In Todd Berry's third year in charge, ULM leaped to eight wins, an upset of Arkansas, and its first ever bowl appearance. With an incredibly experienced squad returning, what might the Warhawks have for an encore?

Share All sharing options for: 2013 ULM football's 10 things to know: How high can you fly?

One of my favorite blurbs from last year's college football season preview series came from the ULM preview:

"The first year it sleeps, the second year it creeps, the third year it leaps."

That's ULM head coach Todd Berry talking about his program's progression entering his third year on the job. Through two years, I had been pretty enamored of Berry's efforts to win at a place where, historically, you just don't win.

He seemed to have internalized every lesson he learned in four tough years at Army -- his Black Knights went 5-42 in four seasons from 2000-03 -- and realized from the first day that you can't win games at ULM simply trying to out-talent or out-work the other team. You also have to bring something a little unorthodox to the table. In his first year in Monroe, Berry's Warhawks went 5-7, missing out on bowl eligibility by the skin of a 23-22 loss to rival UL-Lafayette. In an injury-plagued 2011 season, ULM sank to 4-8, replete with an 0-3 record in one-possession games. But in 2012, ULM most certainly leaped -- to a shocking, season-opening win over Arkansas (and nearly follow-up wins over Auburn and Baylor), to its first eight-win season at the FBS level, and to its first ever bowl appearance.

In the third year, we saw Berry's vision of ULM Funk, the combination of efficiency, resilience, pace, smack-you-in-the-mouth defense and unorthodox, well, everything that he envisioned during both the sleeping year and the creeping year.

Now what can we expect in his fourth year in charge? A steeper leap? A small peep? A crumbling heap?

There's experience, and there's experience. ULM's offense has the latter. When you've got a uniquely talented, multi-year starter at quarterback, a seasoned hand at running back, and 87 career starts on the offensive line, you can probably expect to improve from one year to the next.

Throw in a defense that returns every defensive lineman and almost every defensive back, and you've got overall depth that a Sun Belt program probably isn't supposed to have.

This, also from around last year's preview, is too wonderful for words. You've raised the bar high for your 2013 entry video, ULM.

The end result of ULM's 2012 season was certainly a net positive, but the fall contained a seemingly infinite number of twists and turns. The Warhawks' most noteworthy results (the first three, basically) did not actually coincide with when ULM was at its best -- the offense kind of scraped by with timeliness (instead of down-to-down proficiency) against Arkansas, and in hindsight, even a decent team should have beaten Auburn; you get no credit for coming close against the Tigers in 2012. ULM plowed through most of its next five games, playing at a wonderfully high level. But Jyruss Edwards was lost for the season with five games remaining, and both the offense and defense limped home down the stretch.

With tight losses to both Auburn and Baylor, the late fade, and a general egg in the Independence Bowl versus Ohio, there was plenty of room for disappointment last fall. Still, 8-5 is still 8-5. And again, ULM was still quite young. 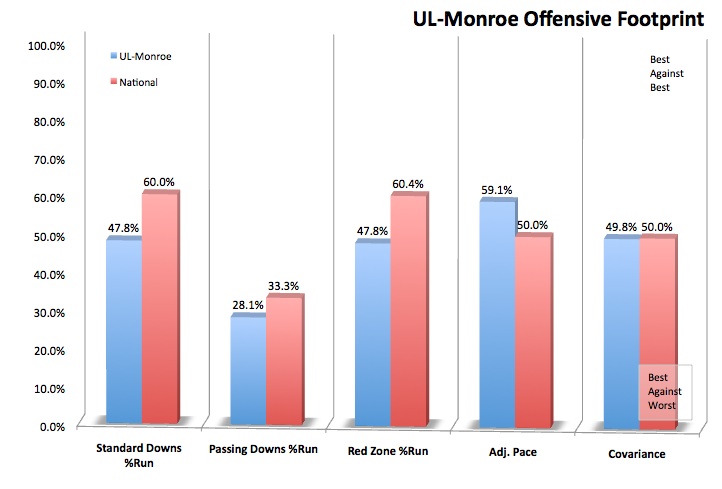 5. How far can efficiency take you?

Between pace and the fact that ULM didn't face many good defenses, the Warhawks put up pretty gaudy per-game yardage numbers, even with the late fade. But when you adjust for opponent, ULM was better at one thing than any other: efficient passing. ULM's success rates were lovely, especially when it came to passing on passing downs. Quarterbacks tend to receive a lot of the credit for making plays on such downs, which means that Kolton Browning's return in 2013 could lead to another fall of rabbits getting pulled out of hats. But still, a few more big plays wouldn't hurt. Big plays give you margin for error, and when Jyruss Edwards went down, ULM lost all of the margin it had.

Perhaps the best thing for ULM this spring could be the figurative move of Je'Ron Hamm to the No. 1 receiver spot and the further emergence of sophomore running back DeVontae McNeal. Hamm averaged nearly 15 yards per catch while complementing possession options like Brent Leonard, Tavarese Maye and Colby Harper (combined: 10.3 yards per catch), while McNeal, the rare three-star signee for Berry, tantalized in minimal opportunities. He rushed 10 times for 114 yards in garbage time against Tulane, and he broke off a 54-yard score in his lone carry versus North Texas. Efficiency is good, but if these players (or anybody else, of course) can add a little bit more explosiveness to ULM's offense, the Warhawks could be devastating.

(By the way, we can see the potential benefit to efficiency and the simple ability to stay on the field longer in ULM's fourth-quarter numbers. The Warhawks' offense was easily at its best late in games, and the defense was at its best in the first and fourth quarters. ULM had a winning record in one-possession games, and one could pretty easily correlate that success to solid fourth-quarter play and the Warhawks' ability to keep their defense fresh while wearing opponents out.) 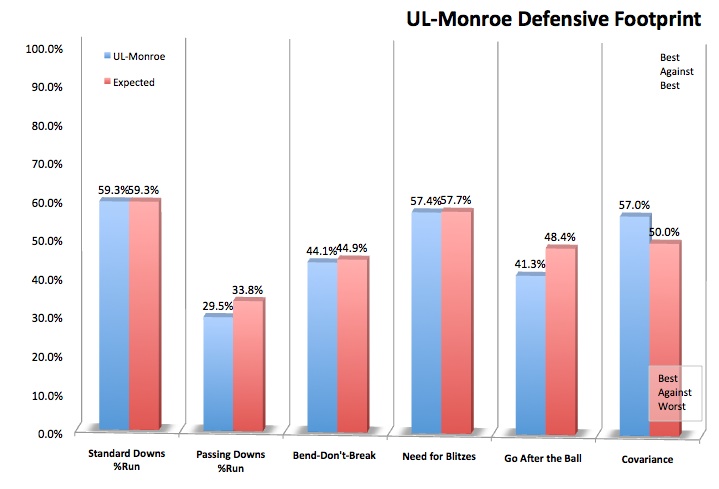 ULM's offense wasn't amazingly explosive, but the Warhawks and coordinator Troy Reffett's 3-3-5 defense made sure that opponents weren't either. ULM suffered all sorts of glitches on passing downs, in terms of both allowing opponents to move the chains and leaking a few too many big plays, but they were confusing and efficient early in downs. The 3-3-5 certainly allows you the speed to form a cloud in front of a given play and swarm to the ball, and ULM had the depth to pull this off in 2012.

Unfortunately, the numbers below suggest that the aggressiveness the Warhawks brought to the table on passing downs was rather misguided. ULM ranked 14th in the country in Adj. Line Yards on standard downs -- a tremendous ranking considering the size of the players involved -- but ranked an egregious 113th on passing downs, which suggests that they were too pre-occupied with getting to the quarterback and left open some large running lanes on draw plays.

In 2013, the primary task for the defense has to be either developing play-makers who can get to the quarterback without sacrificing run efficiency, or adapting their approach to passing downs. Rarely will you find a dichotomy as stark as ULM's when it comes to standard and passing downs. This simply must improve.

Every lineman who made even 1.0 tackles in 2012 returns. The line -- well, the front six, really -- held up very well against the run when its opponent had to run, and there's no reason to think that won't be the case again in 2013. The star in 2012 was then-freshman Gerrand Johnson, a one-time Missouri signee who led the line in tackling and tackles for loss despite serving as the nose of a three-man line, but he might not even be in line to start with the return of Kentarius Caldwell from injury. The line's pass rush could certainly stand to improve (only Johnson had more than 1.5 sacks), but the experience level here is outstanding.

The question, then, becomes this: How much will ULM miss linebackers R.J. Young and DaCorris Ford? All three of ULM's starting linebackers logged at least 10.5 tackles for loss, but while junior Ray Stovall (13.5 tackles for loss, three sacks) returns, Young and Ford do not. Some exciting options return -- Cameron Blakes was a starter until he was lost for the season after three games, while sophomores Michael Johnson, Hunter Kissinger and Cody Robinson all showed decent playmaking potential in limited opportunities; of their combined 41.0 tackles, eight were behind the line of scrimmage. If the linebacking corps can hold steady, a wonderfully experienced front three and back five (seven of the top eight defensive backs return) should ensure overall defensive improvement in 2013.

ULM was great at finishing drives in 2012; the Warhawks ranked 98th overall in Off. S&P+ but 57th in the red zone. Meanwhile, they ranked a healthy 40th in Field Position Advantage. If you can both create more opportunities than your opponent and take full advantage of them, that's a pretty clear, almost cliched path to victory.

We've already discussed the offense's ridiculous experience; it certainly bears mentioning that the strength of ULM's 2012 special teams unit -- every ULM punt was all but guaranteed to result in a fair catch or a down inside the 20 -- should once again be a strength. The return game may have some work to do, but at worst, the special teams unit should hold steady. And hey, since Berry doesn't really elect to kick field goals (nine field goal attempts, 35 fourth-down conversion attempts; they were the anti-Michigan State, basically), it probably doesn't really matter that the Warhawks weren't very good at it last year.

9. Baylor and ULM should play every year.

Just saying. Art Briles versus Todd Berry was incredibly fun in 2012, and there's no reason to think it wouldn't always be fun. This was, after all, the game in which ULM unveiled its short-lived, and glorious, two-QB formation. Can't wait till he goes with three quarterbacks in Waco this year.

If you ask any coach in the country whether he'd rather be the favorite or the underdog, if he was being honest he would almost certainly say he prefers being the favorite. There is nothing easy to life when you are the perpetual underdog, and for most of its FBS existence, ULM has been just that.

There's no telling what ULM's ceiling might be with Todd Berry in charge, but there are pretty good odds that, whatever that ceiling is, we will see it this year. Berry has built a team with depth (in 2010, 62 players dressed out in the spring; in 2013, it's 92), toughness, and quite a bit of funk. And in a realigned, and slightly diluted, Sun Belt Conference, the perpetual underdog could be the conference favorite in 2013. ULM's spring practice begins today. What have you got for an encore, Coach Berry?

• Do you like points? Hal Mumme lands at SMU

• Does Bobby Petrino have weapons at WKU?

• The Dos and Don'ts of making a recruiting highlight tape

• The List: 20 sentences guaranteed to start an Internet argument