Will the Lakers catch the Jazz or Rockets in the NBA playoff race?

In a liberal sense, seven teams in the West are battling for four playoff spots. More conservatively, three teams are battling for two spots. The Hook looks at the teams' remaining schedules to suss out best guesses for where the teams end up.

Share All sharing options for: Will the Lakers catch the Jazz or Rockets in the NBA playoff race?

The end of NBA trade season marks the beginning of Scoreboard Watch season. Those sad fans with teams at the bottom of the standings are watching for fellow lowly competitors in hopes of ping pong ball count boosts. Fans of the teams are the very top are looking at potential match-ups in the first round and beyond.

And the blessed fans in the middle? They're watching the playoff race unfold. Wins and losses have been replaced in their lexicon by "games back in the loss column" and "magic numbers." There are no nights off; even if your team isn't playing, one of its co-contenders will be. For these fans, Scoreboard Watch season is both wonderful and ulcer-inducing.

The real action is in the West this year. If the East becomes a race, it'll only be because things get either depressing -- Bucks! don't leave us! -- or very Bynumian, in which case we'll address it when it needs to be addressed. In the West, there are seven teams competing for four spots. In this column, I make the argument that two of them are toast, meaning one legit contender will be left out.

Instead of using the more reliable, more complex regression models (like the Hollinger Power Rankings) to rank the playoff contenders in the West, I wanted to go dead simple. I look at the teams' remaining schedule, a rough assumption of how teams typically do against good and bad teams on the road and at home, and the current standings. I'm using a sledgehammer and a chisel where a scalpel might be preferred. But I think there's beauty and usefulness in simplicity. That's the aim here.

One of the rough assumptions I make is that the typical bottom-half Western playoff team will win roughly 55 percent of its games. Some will be higher, occasionally you'll be lower, but that's the rough estimate. From there I broke games into four categories: home games against good teams, home games against bad teams, roadies against good teams, roadies against bad teams. My definitions for good and bad are straightforward: East playoff teams (including the sub-.500 Bucks) are good, East lottery teams are bad. All West teams below .500 except the Lakers are bad, the rest (including the Lakers) are good. I boosted L.A. on account of its point differential, but I didn't feel it necessary to drop teams like the Warriors with subpar point differentials and excellent win-loss records.

At this point, I make another informed assumption: that teams of this quality (bottom half of West playoff bracket) can, will or should win all of their home games against bad teams, lose all of their road games against good teams and win 60 percent of home games against good teams and roadies against bad teams. A team that did this would end the season 45-37, which is right in our zone. Of course, in practice teams will win some games they shouldn't and lose others they shouldn't. But as a rule of thumb for this level of team, this holds some general truth.

Here's the Nuggets' remaining schedule according to our categories. 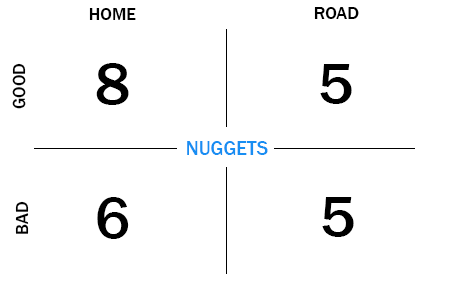 Golden State is 33-23 and has ended that horrid losing streak. They have the good fortune of a home-heavy schedule over the next seven weeks, but it's a wee bit top-heavy. 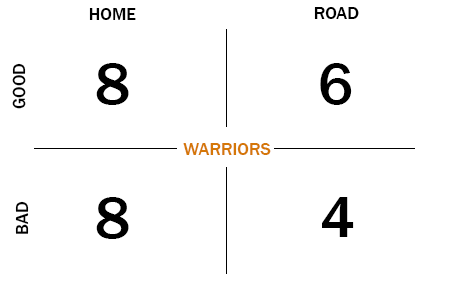 Our system projects a 15-11 record for the Warriors on their way out, which would land them at 48-34. That should be enough for a playoff spot, though likely the No. 6 or No. 7 seed. (That No. 7 seed comes with a likely date with the Thunder. AVOID.)

Many would start this conversation with 31-26 Utah, who at No. 7 in the West sits just 3.5 games ahead of No. 9. And I must say, the schedule is not a friend of the Jazz right now. Of the 12 road games remaining, eight come against teams currently in a playoff seed or the Lakers. 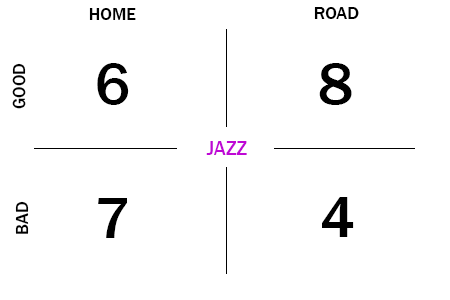 Houston is currently 31-27, a half-game behind the Jazz and three games clear of the No. 9 seed in the loss column. And the remaining schedule? 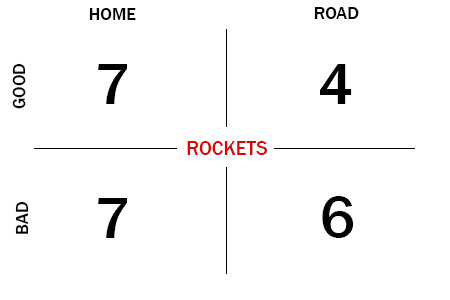 Holy Distinct Lack of Tough Road Games! Our system has the Rockets closing 15-9 for an overall record of 46-36. And if Houston plays well, that might be an understatement: those four roadies against good teams we're counting as losses are against the Grizzlies, Warriors, Nuggets and Lakers. Not a single road game remaining against a top-3 West team. 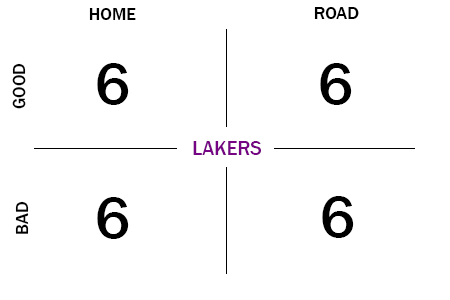 And now, the two teams that by virtue of the standings remain technically in the hunt but in reality are so, so toasted.

Portland is 26-30, one game behind the Lakers for No. 9 and all even in the loss column. But good gravy, look at this schedule! 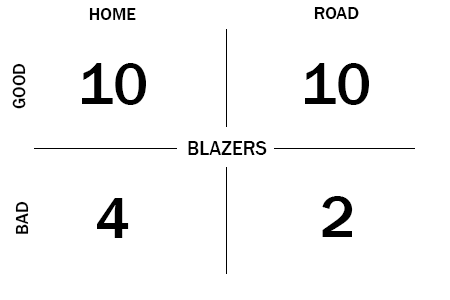 A full 20 of 26 remaining games come against teams in the playoff bracket or the Lakers. Heavens to Batum that's ugly. My rough figuring has Portland going 11-15 the rest of the way for a 37-45 record. Sorry, Blazers.

Dallas is currently 25-30, 1.5 games behind No. 9 and all even in the loss column. And ... my Raef, what is going on with these fringe playoff contenders and their schedules?! 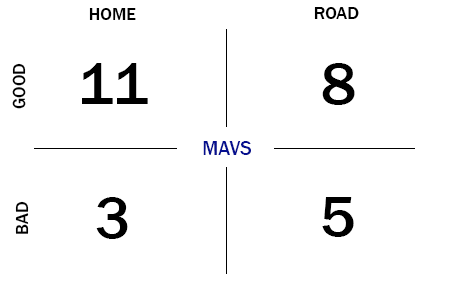 It's as if the Basketball Gods want us to fully expunge the Blazers and Mavericks from our concern. Dallas has 14 home games remaining... and 11 come against playoff teams or the Lakers. We project the Mavericks to go 13-14 on the way out for a 38-44 record.

Now let's put it all together with some projected standings based only on a rough estimation of how these teams will do with their remaining schedules.

So basically, the schedule tells us that the Rockets and Jazz will switch place and the Lakers will get to .500. This was sure a fun exercise! Of course, things could go very differently. And we'll be watching intently, preferably with fewer ulcers than fans of the above teams.

• Dwyane Wade's nickname is awful, but our suggestions are worse

• The Lakers are finally winning, and they still aren’t that great