2013 Arkansas State's 10 things to know: Checking in on the Boise blueprint

Arkansas State has modeled itself the Boise State of the South. If they could stop losing head coaches at some point, they might just get there. The size of their potential drop-off in 2013 will tell us a lot.

Share All sharing options for: 2013 Arkansas State's 10 things to know: Checking in on the Boise blueprint

In 2010, Steve Roberts' nearly decade-long tenure of almosts at Arkansas State ended unceremoniously, with a second straight 4-8 season. Roberts had taken ASU to one bowl game -- the 2005 New Orleans Bowl -- but his progress was otherwise hindered by a six-win glass ceiling. ASU won six games in a season four times in nine years and won five two other times, but his Indians-turned-Red Wolves just couldn't quite get over the hump. In 2011, ASU brought in Hugh Freeze, who stayed for a year, won 10 games, and left. In 2012, ASU brought in Gus Malzahn, who stayed for a year, won 10 games (including the bowl for which he had already departed), and left.

Heading into 2013, ASU seems to be dealing with another glass ceiling of sorts. The Red Wolves can either hire a six-win coach and keep him until they don't want him anymore, or they can keep aiming high, keep reeling in really good, exciting, young coaches, and watching them leave for an SEC school once they have succeeded. They appear to have elected the latter.

Just over a decade ago, Bryan Harsin was a graduate assistant at Boise State. He became Dan Hawkins' tight ends coach at BSU, then took over the reins as offensive coordinator in 2006 (at 28 years old) when Hawkins left for Colorado and Chris Petersen took over. Mack Brown brought him to Texas for two years to resurrect an inexcusably awful offense, and despite only reasonable success -- Texas' offense absolutely improved but still wasn't elite by any standards -- his career trajectory has continued apace. At 35, the former Boise State quarterback, grad assistant, tight ends coach and offensive coordinator has become the head coach at a school that has openly yearned to follow the Boise blueprint to success. 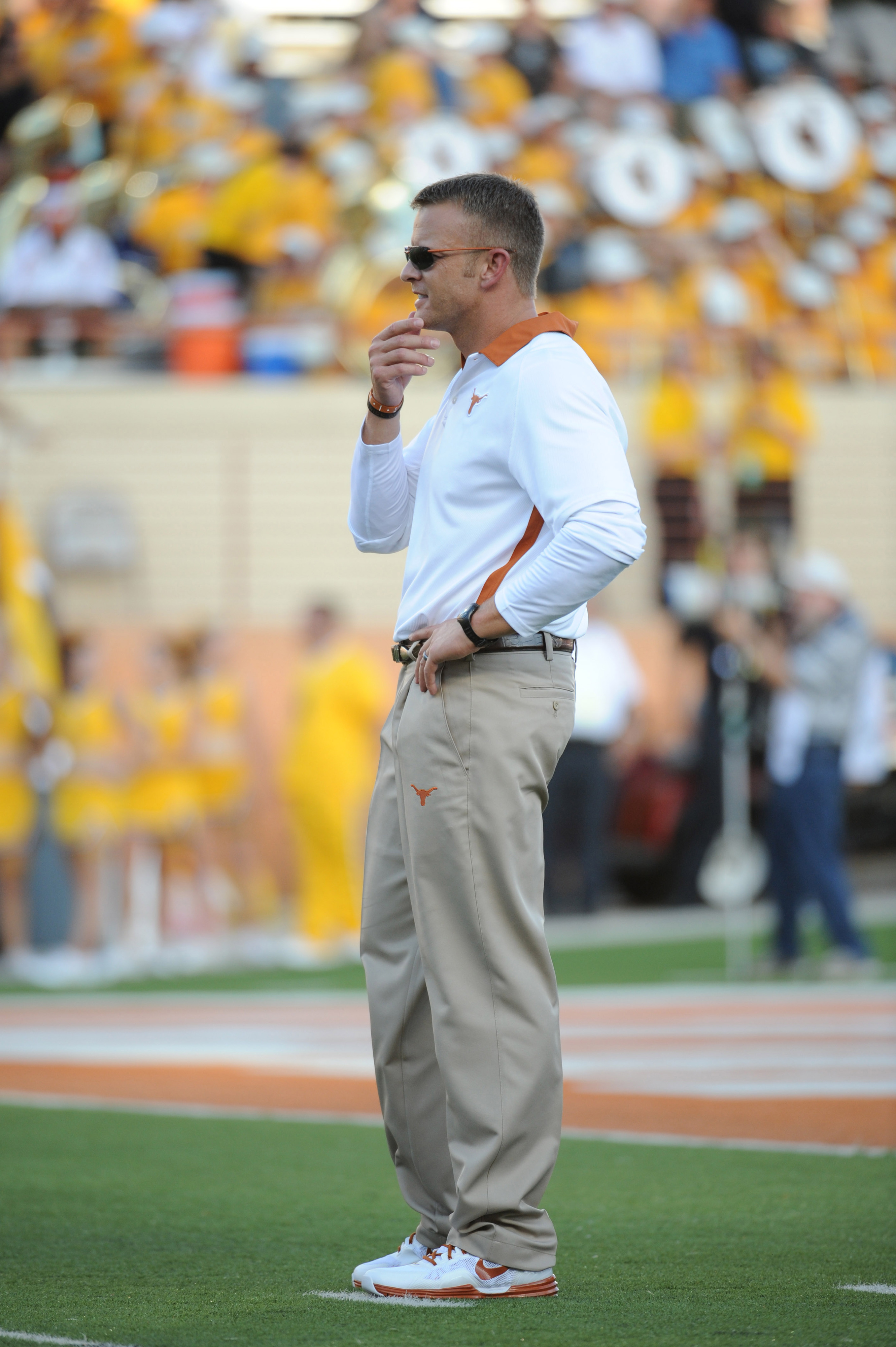 It might not be a smart policy to begin doubting Arkansas State after it won 20 games in two seasons despite constant transition. But the transition issues could kick up a notch or two this time around.

Not only did Malzahn, like Freeze, leave after one year, but quarterback Ryan Aplin, the two-time Sun Belt player of the year, is now also gone. Aplin started more than 40 straight games for the Red Wolves, passed for 10,753 yards, rushed for another 1,756 and helped to account for 98 total touchdowns (67 through the air, 31 on the ground). After interception issues earlier in his career, he was nearly perfect in 2012: 3,342 passing yards, 68 percent completion rate, 24 touchdown passes, four interceptions. In his place is a grab bag of potentially interesting replacements.

With UL-Lafayette and ULM returning vastly experienced, interesting squads and Bobby Petrino looming at Western Kentucky, ASU's odds of winning a third straight Sun Belt title aren't great. But the size of the setback -- do they slip to eight or nine wins, or do they stumble to five or six instead? -- will determine the program's trajectory moving forward. The ASU program has so many things right in recent years, and it continues to aim high. In 2013, we'll find out just how strong the bones of the program are.

His tenure was not a long one, but new Auburn coach Gus Malzahn oversaw some pretty impressive recruiting in Jonesboro. His 2013 recruiting class, culled from both his own efforts and maintaining Hugh Freeze's before him, ranked 68th in the country according to Rivals.com, ahead of teams like Wake Forest, Minnesota, Kansas, and Temple. It featured a rather incredible 17 three-star recruits, and while many of them either didn't make it to campus or have already left, just check out the list of true sophomores and redshirt freshmen below. Recruiting rankings obviously only take you so far, but they do hint at a program's overall ceiling. And aside from perhaps UL-Lafayette and/or Western Kentucky, no Sun Belt team has a higher ceiling of talent than ASU.

4. Arkansas State was ridiculous after September

September was a month of ups and downs for ASU as a whole. The Red Wolves played reasonably well (average, at least) in a loss at Oregon, barely scraped by Memphis and performed pretty poorly at Nebraska, laid a nearly perfect pasting on Alcorn State, and fell behind in the Sun Belt race with a home loss to Western Kentucky that featured very little in the way of effective offense.

Then, the light bulb came on.

Over the final two months of the season, ASU's offense improved by nearly a touchdown, and its defense improved by nearly a touchdown. There were setbacks along the way -- Troy handled ASU's defense with ease, and the offense was far from perfect in the bowl game versus Kent State -- but for the most part ASU's season-ending eight-game winning streak was accompanied by truly solid, Top 25-caliber play. (For the full season, a plus-10.1 adjusted scoring margin would have ranked 19th in the country, one spot behind Michigan and three ahead of South Carolina.) 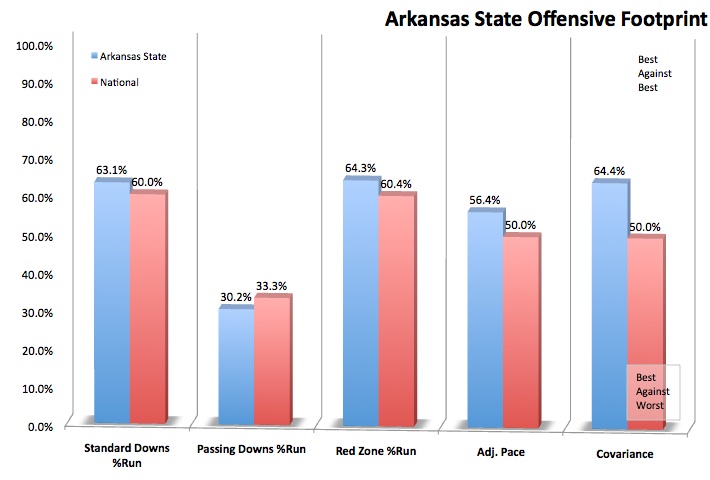 The race to replace Ryan Aplin does not lack for warm bodies or variety. You've got sophomore Fredi Knighten, an interesting dual-threat who makes Denard Robinson look enormous. You've got senior Phillip Butterfield, a former star recruit who has spent the last three years stuck behind Aplin on the depth chart. You've got Dezmond Stegall, a redshirt freshman with a pedigree. And you've got Chandler Rogers, a mid-year junior college transferr who will be in for spring ball. For that matter, you've also got two-star freshman Cameron Birse.

The winner of this battle might have as much to do with the approach Bryan Harsin wants to take on offense as it does with spring performance. Knighten was a run-first guy last year, and Stegall threw for 5,500 yards and rushed for 2,400 in high school. And for that matter, Butterfield has proven more with his legs (27 carries for 154 yards) than his arm (13-for-27 with a touchdown and an interception) in his limited opportunities. Meanwhile, Rogers is more of a pure passer -- he threw for 3,164 yards and 30 touchdowns at Copiah-Lincoln Community College in 2012.

At Texas, we pretty clearly learned that Harsin doesn't mind a quarterback platoon if a clear leader does not emerge.

6. Can ASU maintain its efficiency, all things considered?

In players like Rocky Hayes, Tayloer Stockemer and Julian Jones, ASU certainly had some big-play ability last year; but for the most part, this was an efficiency attack. J.D. McKissic and Josh Jarboe combined for 16 targets per game and only 10.4 yards per catch, while primary running backs David Oku and Frankie Jackson averaged just 4.5 yards per carry. ASU's was a Top 50 offense in terms of explosiveness but a Top 20 offense in terms of efficiency. One has to fear that Aplin's departure will hurt the Red Wolves most in that regard.

Oku, Jackson, McKissic and Jones all return, as do six linemen with starting experience -- from a line that was one of the best in the country in short-yardage situations, no less -- but the losses of Stockemer and Jarboe, not to mention the potential loss of Hayes to the defensive side of the ball (he was originally signed as a defensive back and is listed as a defensive back on the 2013 spring roster), will hurt this team's impressive precision. 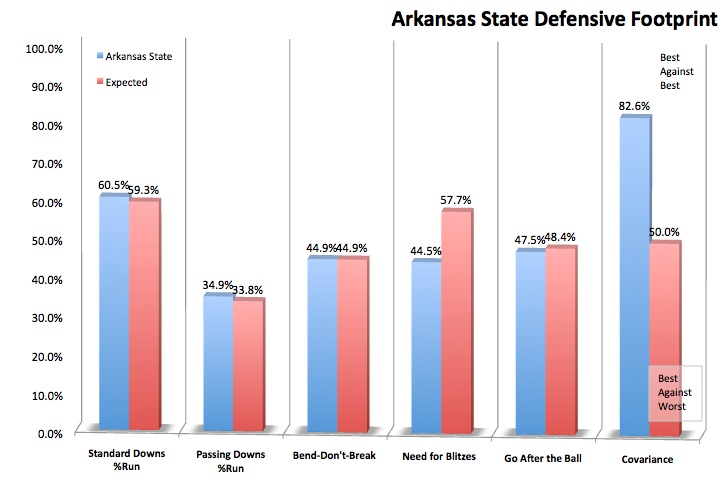 7. ASU relied on its athleticism on defense

If you look at the chart above, you see that ASU's defensive Covariance was off-the-charts high. What does that mean? It means they tended to play quite a bit better than the average defense against bad offenses and quite a bit worse than average against good ones. Against teams like Alcorn State, North Texas and Florida International, the ASU D was a brick wall. But offenses like Nebraska's, Troy's and Western Kentucky's fared better than average against them.

If ASU had an athletic edge over you in 2012, it proved capable of completely hindering your big-play ability, generating pressure without blitzing, and stiffening nicely in short-yardage situations. With a new staff and some turnover atop the depth chart, we'll see if that remains the case in 2013.

8. The back seven has been thinned out

Chaz Scales was one of the most important pieces of ASU's back-to-back Sun Belt titles. In 2011-12, he picked off three passes, broke up 18 more, and made just 62.0 total tackles. You potentially don't want your corner making too many tackles in a pass-happy league -- it suggests his man caught a lot of passes -- and Scales' ratio of passes defensed to tackles made was stellar. (Those same data points could also suggest he wasn't much for helping on run defense, but ASU's run defense was rock solid, so that's probably not the case.)

The loss of Scales, strong safety Cole Lorigan and end Tim Starson, the team's top pass rusher, could significantly hinder a pass defense that was already a relative weak point on this defense. ASU linebackers combined for just 2.5 sacks in 2012; with the front and back of the defense thinned out a bit, defensive coordinator John Thompson (a holdover from Malzahn's staff and the interim coach during the GoDaddy.com Bowl) might need to blitz quite a bit to help the secondary out.

ASU might be fighting regression on both offense and defense, but special teams has nowhere to go but up. Brian Davis is a rock solid place-kicker, but every single other aspect of special teams was poor to awful in 2012.

10. How's the Boise Blueprint™ coming along?

Again, Arkansas State is openly using Boise State as its model for program building. Though it recently reassigned athletic director Dean Lee to more of a fundraising position within the university, the commitment seems to be there. ASU is investing in facilities, hot young coaches, etc. And one cannot argue that the last two years have been incredibly positive for the Red Wolves on the field. One just has to fear the amount of turnover the program has endured.

If ASU can maintain a solid level of play this coming season -- without Gus Malzahn, without Ryan Aplin, and with another year of coaching transition -- then we will have no reason to doubt where the program is headed. The Red Wolves have earned quite a bit of benefit-of-the-doubt in the last two years; they will earn a lot more with a solid 2013.

• The best (and we mean worst) quotes from the Combine