Famous NBA dunker Desmond Mason continues to pursue fine arts as a second career. He auctioned some work at a Super Bowl brunch on Saturday. There is nothing that fails to be awesome about that.

Desmond Mason is no longer playing in the NBA. He is still pursuing his other great love and talent: painting. Mason produced art when he was still in the league, and it's great to see he's doing it in retirement. In fact, he auctioned off a few pieces (including Little Town on Red Dirt Road, seen above) at the NFL Players Association's annual Smocks and Jocks jazz brunch in New Orleans on Saturday. Proceeds go to a scholarship fund.

A few years back, I asked Sonics swingman Desmond Mason if we could pay a visit to a 16-year-old friend of mine who was dying from brain cancer. Mason didn't hesitate to say yes.

He had visited Ari Grashin once before, when Ari had first been diagnosed, but I told Mason this visit might be more difficult emotionally for him.

For weeks, Ari hadn't allowed his friends to see him. But on this day, there was an excited buzz in the Grashins' house. Because of Desmond Mason, Ari agreed to invite about a half-dozen of his lifelong friends into his bedroom. Mason sat on the bed, held Ari's hand, told stories and jokes for several hours and made Ari's final days just a little bit easier for Ari, his family and his friends.

No, really: Desmond Mason is awesome.

Another of Mason's works, Deciphering Structure and Color, is below. You can see a few more images of his work at the blurb for an exhibition he did at Oklahoma City's East Gallery last year. 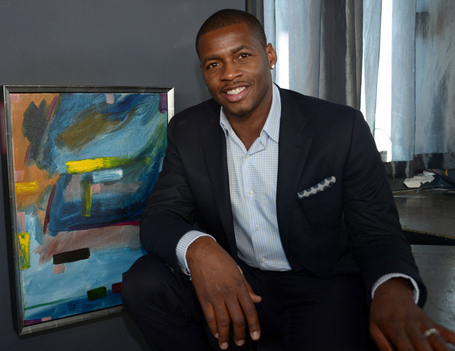