Super Bowl commercials are usually spiritually hollow and ought to be forgotten. There were a few exceptions Sunday night, though. Here, we take a look back at the best, worst, and funniest ads from Super Bowl XLVII.

With this bunch of Super Bowl ads in the books, it's time to dole out some awards.

All of the Super Bowl commercials

Let's first establish that, although most of last night's Super Bowl commercials were mediocre and best forgotten, none were as bad as the HomeAway commercial from two years ago:

This is the bottom: we were expected to buy a guy called the "Minister of De-Tourism," and before we could decide whether they were trying to play on the word "detour" or he was anti-tourism or what, we were whisked away to a series of images that sort of half-explained what HomeAway.com even is. The baby-hits-the-wall shock humor was completely blunted by the "Test Baby" disclaimer they begrudgingly added. This, to the best of my recollection, is bottom.

The GoDaddy.com ads were as bad as they always are, and to award them the title of "worst Super Bowl commercial" is to give them exactly what they want, so I'm not gonna talk about those. The ad I disliked most last night came courtesy of Audi:

If this kid had simply ditched prom night to ride his dad's Audi around town, it would have advertised the car effectively and presented an awesome "**** off haters" message. The car, apparently, isn't cool enough to do that, but it is cool enough to embolden him to walk straight up to the homecoming queen and ambush her with a kiss, which is something you do if you don't give a shit about the agency of other people. It seems as though she ended up liking the kiss, because this is fiction written by someone who thought it was rad for a kid to do that. But if you do that in real life, you are a creep and should probably try to "get the girl" in a manner less passive-aggressively than, "drive around a nice car until you feel like a man and then ambush her."

THE AD THAT GOT THE MOST LAUGHS

Two years ago, Volkswagen introduced its "Darth Vader" ad, which is probably my all-time Super Bowl favorite. Their "Get In. Get Happy" ad last night didn't touch that one, but it did evoke plenty of laughter at my party:

I watched this sober and alone Saturday, and had no reaction. Then I saw it after drinking a few beers and in the company of friends, which is the environment in which these ads are intended to be viewed, and had a laugh. The true test: whether you can watch this on a Monday morning, perhaps hung over, and think it's funny.

THE AD THAT SHOULD HAVE BEEN EXPANDED INTO A MOVIE

I think E*TRADE has completely wrung America dry of any enthusiasm it could possibly generate for its talking babies. By this point, it seems, they're dumping $4 million into Super Bowl ad space as a formality. This ad is far more interesting if you consider what came to pass after Captain Baby ran his ship aground. 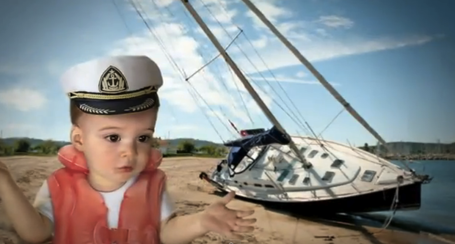 The captain's hat signals an intent to maintain authority over his crew, even though his vessel of captaincy is lost, and even in the wake of his personal failures. The photo suggests that his crew has abandoned him, save for the photographer, unless he set up the camera himself to document his failings. The rest of the film, Captain Baby would wrestle with guilt, and eventually conclude that the fault lies in the maritime authority that granted him a position of command. It's a film, really, about how much personal responsibility one can really claim while existing within the authoritative hierarchy of modern mankind, and whether said personal responsibility evaporated when we stopped hunter-gathering and started smithing crowns and minting money.

THE AD WITH ABSOLUTELY ZERO GAS IN THE TANK

In 2004, I went to the theater and watched Starsky and Hutch, starring Ben Stiller and Owen Wilson, and I think I may have even done so on purpose. The movie was all kinds of boring and bad, but a moment sticks with me: at the end, New Starsky is given a new Torino by the old Starsky and Hutch, played by the original actors from the TV series. On the way out, I heard some lady say, "I thought that was great! A real 'passing of the torch' sort of moment."

That lady, wherever she is, probably loved this shit.

This Priceline ad brings roughly as much out of me as they put into it. It's just sort of ... there, and when I try to imagine the sort of person who would actively dig it, I can only picture that lady in the theater.

For real, though: William Shatner is looking pretty good for 81.

Budweiser's "Clydesdale" ads are a longtime Super Bowl institution, and I'm generally completely unresponsive to such a thing. But this by the end of the commercial I completely surprise myself and start feeling Actual Feelings. I think of every friendship I've ever had with an animal, and how unique and meaningful those friendship were. I think of the last time I ever saw my childhood dog, how he walked straight up to me and gave me a kiss -- something he never, ever did, and something I interpreted as his acceptance and goodbye. I don't think your beer is all that great, you guys, but good Lord.

It's pretty clear to me at this point that Super Bowl ad people are far better at dramatic sentiment than they are at humor. Remember Clint Eastwood's Chrysler spot from last year? Whether he really bought the idea or car he was selling was beside the point. That shit was an event.

For the second straight year, we found something fantastic and arresting, buried deep within the second half. This is Ram's Super Bowl ad, featuring the voice of Paul Harvey.

I'll confess to totally marking out for this one. My immediate response last night was met with a little flak, which I think is entirely fair. Late last night, I talked about it with my friend, Peter Holby:

11:31 PM Peter: can we talk about the farmer commercial
11:33 PM me: certainly
11:35 PM Peter: it seems to me that there is not a segment of this society that needed a commercial less than farmers. they're the group most frequently portrayed via hagiography, the group endlessly praised by anyone seeking national office, the group that has a massive chunk of congress looking out for their interests
me: can't argue with that
11:36 PM Peter: that's basically it, realy. watched it a few times and found myself writing "so god created a single mother" narratives in my head
11:37 PM "so god created an undocumented immigrant"
etc etc

True, true, and true, all of it. It was the craftsmanship of the ad, rather than the ad, that I really enjoyed. Paul Harvey's inclusion was a masterstroke. I spent too many hot days as a kid inside a decade-old Escort, being ferried through the too-far-apart suburbs of northern Atlanta, hearing Paul Harvey through the radio, to not have some sort of response. He was News of the Weird, but more genuine. He was Andy Rooney, only vastly superior. He was the old fella who really wanted me to purchase electric mattresses and Citracal.

Paul Harvey died in 2009. I hadn't heard him in years and years. His story about the fun-loving drunkard who tried to throw a live grenade out the window of his car, but forgot to roll down said window first, will always be the one I remember above all others, but this one was just fine.

Super Bowl commercials 2013, for all y'all consumerists and total suckers out there