Never host a Super Bowl anywhere else other than New Orleans

A Super Bowl Sunday spent around the city only reinforces the notion that the NFL should consider making New Orleans a permanent Super Bowl host.

Share All sharing options for: Never host a Super Bowl anywhere else other than New Orleans

NEW ORLEANS – Yes, someone's drink was descending upon my head and down my back from atop a balcony on Bourbon Street a few hours before Super Bowl kickoff. Yes, it was foul. And yes, it serves me right for entering the tourist trap. But having spent the last week here -- and even in spite of the drinks spilled, vomit splayed and general excess -- there is only one obvious choice for the NFL going forward: never host a Super Bowl in any other city ever again.

Simply, no other city provides the food, warmth, hospitality, 24-hour bars and walking proximity the way NOLA does.

"I'm detoxing as soon as this is over," former big leaguer Eric Byrnes tells me inside Pat O'Brien's bar a few hours before the game.

Byrnes is here because he rented an RV and drove from Houston, arriving here on Friday and parking his rental in an RV park that abuts the French Quarter. The former Oakland A's outfielder is from San Francisco and a huge 49ers fan. So he game-planned and spent three days partying and hoping for a 49ers win. I met him at the bar with a group of his friends and his sister, handing me a Hurricane drink before we walked the streets en route to the Super Dome. 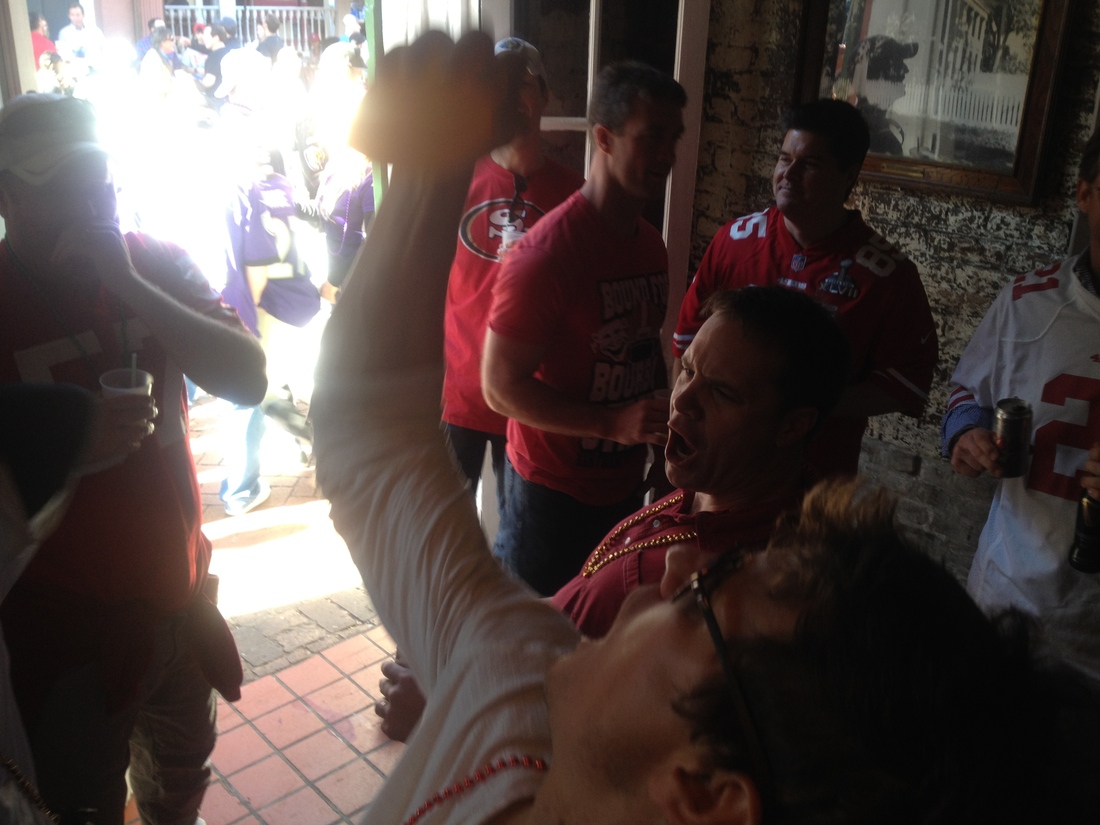 I know of no other city in which the combined debauchery and city grid could provide the best people-watching and communal experience. Perhaps San Diego, but not to the degree this city can. Of course, excess is a gross understatement in this city of sin, but really, it only aligns with the impressive power that is the NFL and its marquee event have grown into.

They are spirit animals, in that sense, filled with power, glitz, glamour and at times plenty of ugly, too. While it will be an impossibility to move next year's game out of my home city in New York, I see no reason for why New Orleans shouldn't be named a permanent host thereafter.

And no other moment underscores that fact for me than when, about 30 minutes before kickoff, I was presented with a dilemma: stay in the Super Dome and watch the game from a cold basement filled with neon lights, or hang with a guy named Cajun Boy, and watch the 49ers and Ravens face off at a local spot filled with locals.

I was afforded an opportunity to make a decision like that on the fly, and when I saw Cajun Boy instagram a photo from just outside the Dome, I texted him and within 20 minutes we were sitting at Capdeville restaurant, owned by James Eustis, a proprietor who takes pride in owning a spot where locals frequent in spite of its proximity to the French Quarter. I may have been the only person inside the Dome at that very moment who yearned to be outside. 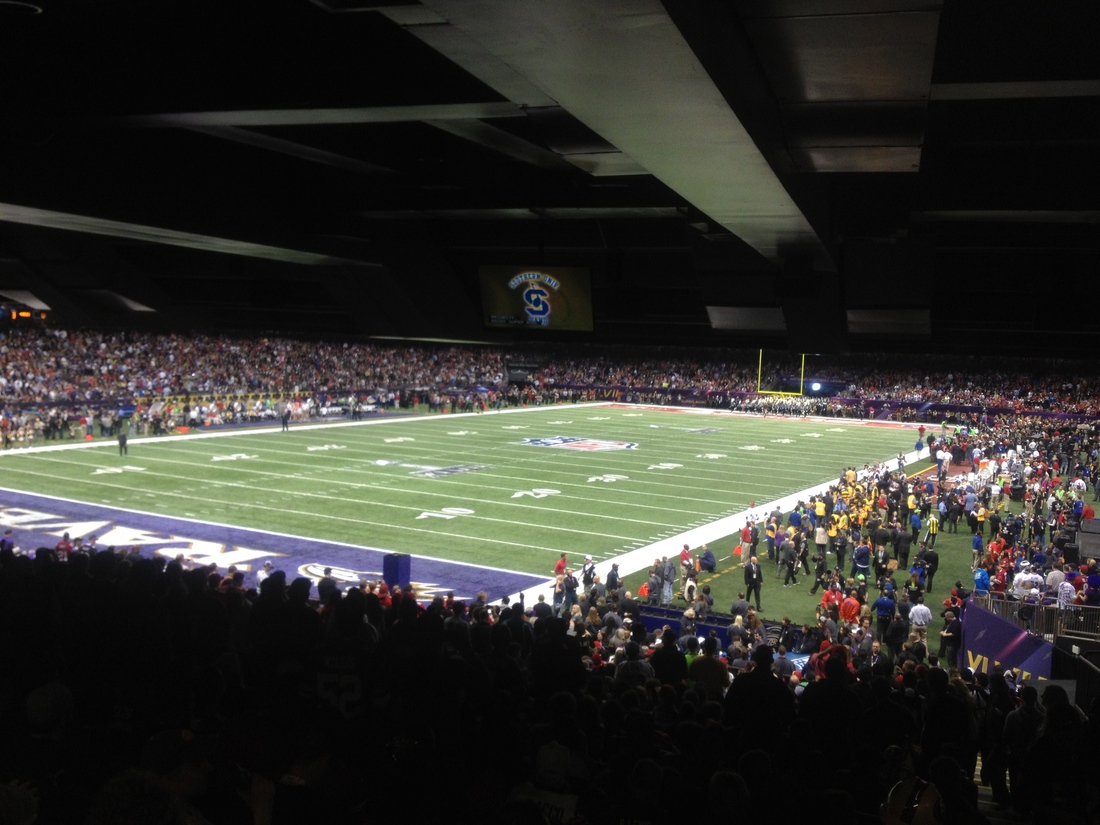 Proof I was inside.

I met Cajun Boy at the intersection of Poydras and Loyola, where he was sitting on his bike, taking in the scene. Most of the people were already in the Dome, the streets littered with beads and a few stray people rushing to get in. CAJUNBOY is how he is entered into my iPhone and I call him the mini Mayor of this city; he knows everybody. When we arrive at Capdeville, Eustis greets us wearing the T-shirt the rest of his staff dons that reads Defend New Orleans.

And as soon as we walk in, some indiscriminate dude yells "Cajun Boy!" We sit at the bar and I feel super famous, by Cajun Boy osmosis. It's hard to miss Cajun Boy, a massive dude who looks like he could be a lineman. As the game kicks off, we order red rice and beans fried balls, some tomato fennel soup and I notice there isn't a lone 49ers fan in the place.

"The 49ers used to be our rival," Cajun Boy says. "That's why no one in here is rooting for them."

Eustis reminds Cajun Boy what happened last year during the National Champsionship game. When LSU played Alabama here, Eustis, an LSU alum, took his father to the game. At one point his manager, Jeremy, texted him and told him for some inexplicable reason, Capdeville was filled with Bama fans. It was borderline heretical.

"I was ready to leave the game right there," Eustis says. Incredulous, he told Jeremy once the game is over, turn off all the TVs and play the LSU fight song. His father highly advised against it, not the wisest business decision.

"Do it," he told Jeremy. And soon as the game wrapped, TVs off, fight song on, bar cleared.

"Once LSU fans heard about what we did," Eustis says, "they all came through."

Just before halftime I notice a table filled with mostly women positioning themselves for Beyonce. Looking at their faces alone it's clear she is their mayor, their queen. Three other women who work at the restaurant gather behind the bar and I'm almost sure at least 60 percent of them had tears forming before Beyonce even began singing. All the women look as if they're in a trance. THEY'RE NOT EVEN BLINKING. NONE OF THEM. SOMEONE BLINK. 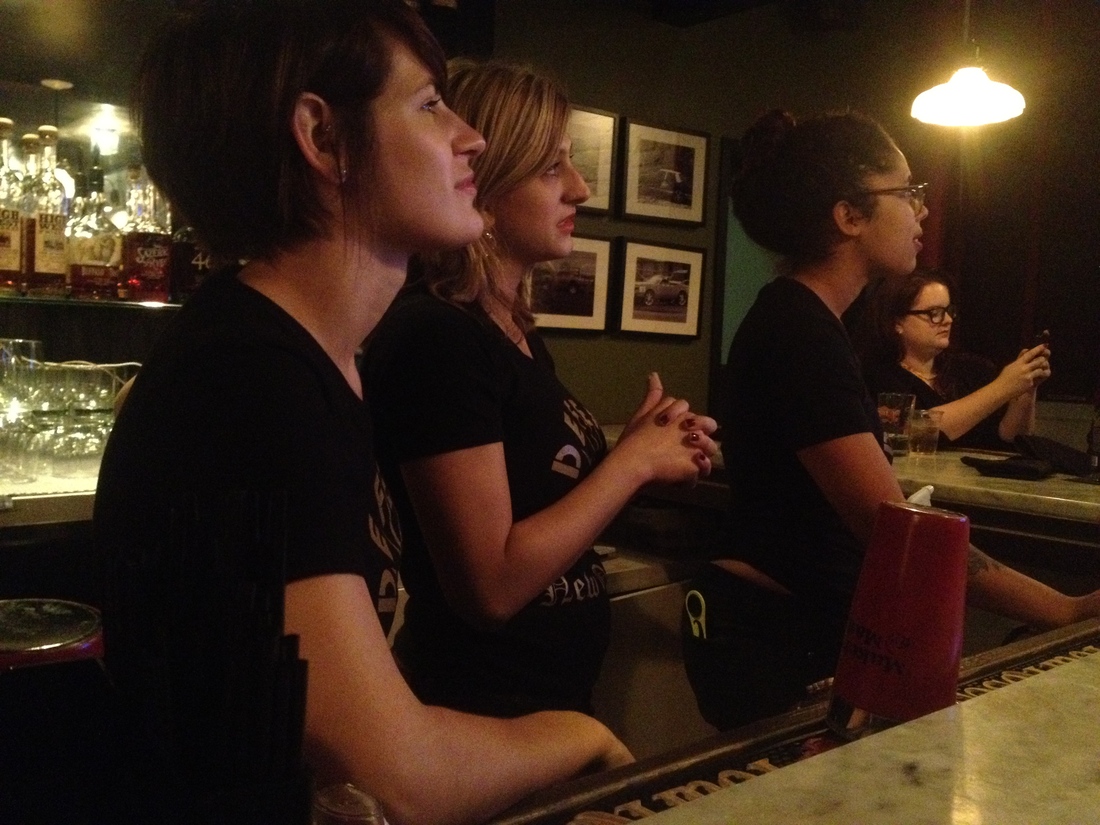 In the Beyonce zone

Ingesting flank steak, truffle mac and cheese with red wine butter and roasted chicken and french fries respectively made us nearly fall asleep. Cajun Boy retreats for his house for the second half, while the bar mostly empties out. Then, the lights go out in the Super Dome. Then, all of a sudden, I realize a different dynamic exists in the bar. I text Cajun Boy, "at one point after you left a table of 49ers fans got here. Awkward."

"First the lights went out and then 49ers fans show up?!?! I am never leaving Capdeville again!"

I tell him he may have to come back to the bar and his superstitious side forces him back, to ensure a Ravens win. Back on the scene the Ravens start playing well again and eventually win. The bar is happy, the 49ers fans leave, and all is right with the locals.

I leave with truffle mac and cheese to go and thinking: Please, NFL, make this happen every year. A place where, even if the Saints aren't in it, a purpose always seem to exist, even if the end result is spilled drinks, some extra pounds, one too many cocktails and a few regrets. It's worth it. 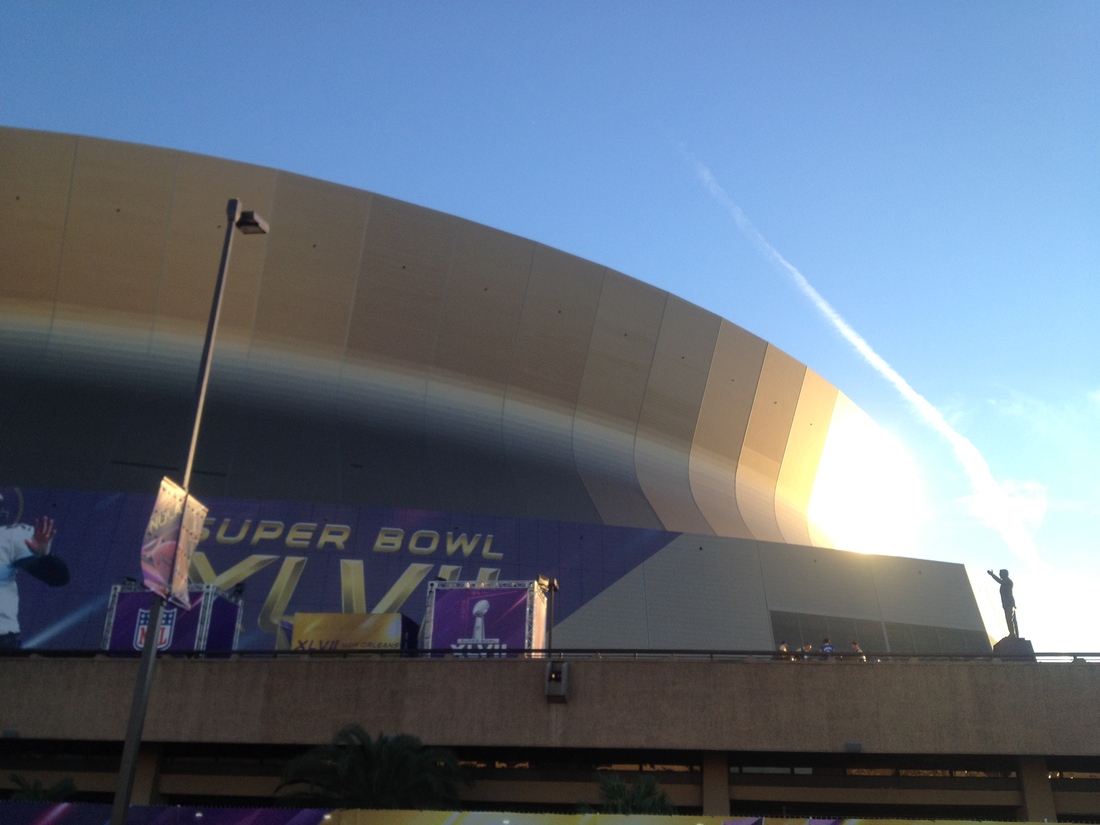 The Super Bowl should always be played here.