NBA scores: Nets let one get away in disappointing home loss to Lakers

The Brooklyn Nets' structural problems were exposed in a bad home loss to the Lakers. Elsewhere, the Bucks and Nuggets play a weird one in Denver and the Rockets rout the Warriors.

Share All sharing options for: NBA scores: Nets let one get away in disappointing home loss to Lakers

This was a terrible loss for the Nets that exposed so many of their structural issues that had been patched up temporarily when they played horrible teams in January. The last two minutes of this game featured some of the sloppiest half-court crunch-time execution I've ever seen. You had guys air-balling shots, players turning it over on basic inbounds passes and Deron Williams committing one of the worst intentional fouls you'll ever see with three seconds on the shot clock and the game slipping away.

But those were obvious problems. The bigger issue for the Nets is that they made some critical less-obvious mistakes throughout the game.

Let's start with that Kobe Bryant dunk. While everyone is going ga-ga over the highlight, it could have easily been avoided with some basic help defense. Watch Kris Humphries here. 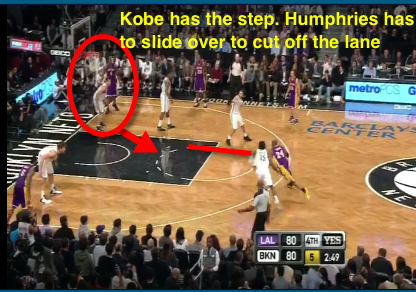 By now, it's obvious to anyone that Bryant has a step on Wallace. Proper help defense calls for the big man to slide over right away to prevent penetration, ESPECIALLY if the man driving is a scorer like Bryant. Instead, look how long it takes for Humphries to even attempt to cut off the lane. 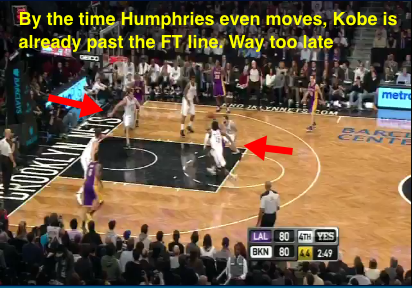 And that's how you get dunked on.

Looking even deeper, I think a lot of blame for this loss needs to be laid at two key pillars of the team. First, P.J. Carlesimo. The interim head coach has mostly done a great job since taking over for Avery Johnson, but in this game, he cost his team a win by not adjusting once Pau Gasol went down. Mike D'Antoni chose to go ultra small with Earl Clark and Antawn Jamison up front, and Carlesimo still stuck with a big lineup with Wallace, Humphries and Brook Lopez. The Lakers exploited this by having Jamison and Clark set double ball screens to exploit the Nets fontcourt's lack of mobility.

Here's one play that led to an easy Jamison layup. 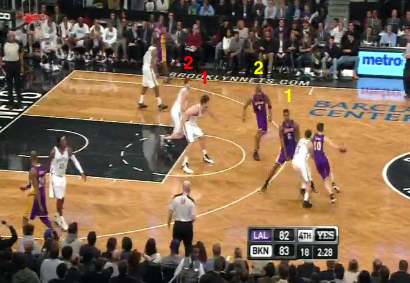 As you can see, D'Antoni has both Clark and Jamison setting high screens as Humphries and Lopez hang way back in the lane due to their lack of mobility. As we roll the play forward, you can see just how exposed those two end up being while defending this kind of play. 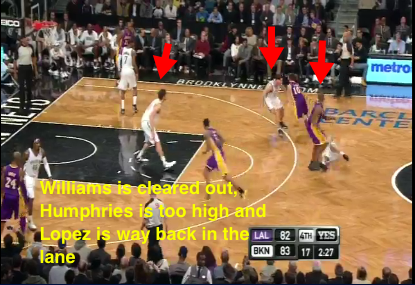 Humphries is way out of his element helping on Nash and Lopez has sunk way too far in the lane trying to defend the rolling Clark. That leaves Jamison wide open for an easy pass and shot. 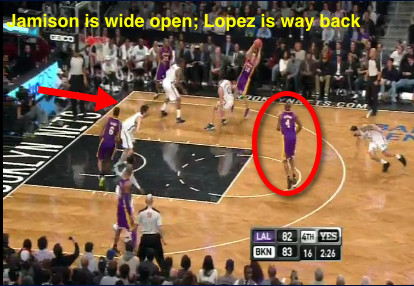 A smaller lineup would have made it easier to defend that play, but Carlesimo stubbornly stuck to his big lineup and watched it get picked apart.

Finally, there's Williams. In this game, he shot 5-13, committed five turnovers and fouled out, all while going against arguably the league's worst point-guard defender in Steve Nash. As has been the case all season, Williams seems to have all the skills. He just squanders them with some poor decisions.

For example, while this looks like a decent shot on the surface, consider that it's early in the shot clock, the Nets are in an offensive drought and are just coming out of a timeout. These situations call for patience and for the point guard to run the set play to get the right guy a good shot. Williams instead launched the first semi-decent look he saw and missed badly. 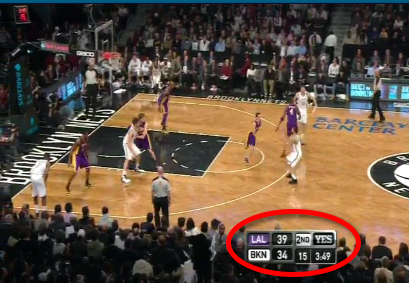 Several of those five turnovers were avoidable too. For example, look at how he puts his head down and doesn't see Joe Johnson open in the corner until it's too late. 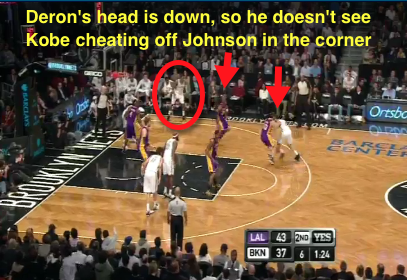 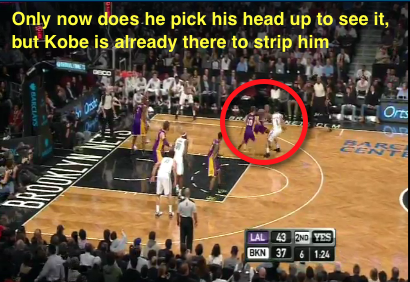 And here Williams is waiting too long to spot an open Wallace in the corner, leading to another turnover. 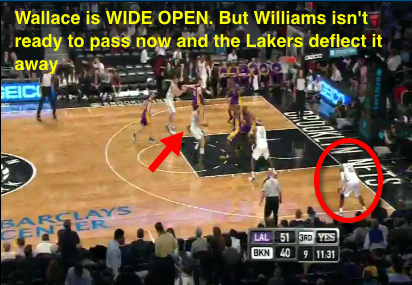 Finally, look how off-target this pass to Wallace in the corner is. 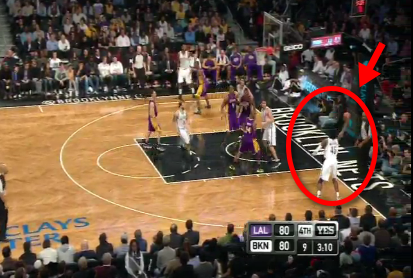 These are sloppy plays made by a point guard not demonstrating good vision. Williams is still putting up numbers, but his awareness, decision-making, clock management and situational understanding has been awful all year. It has to improve if the Nets want to go anywhere this season.

To a certain extent, this was just one of those nights for the Warriors. Houston takes a ton of threes, and in this game, they couldn't miss. Golden State's defense could be much better, of course, but the Rockets getting to 140 was a product of hot shooting.

Then again, look at this Rockets shot chart: 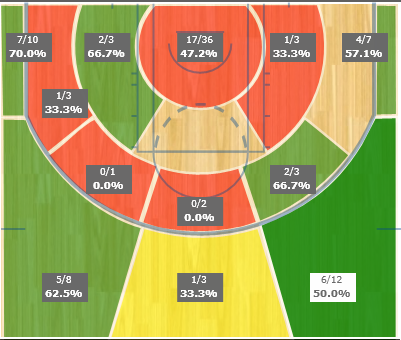 Just look at the attempts. The Rockets took 91 shots total in the game. Sixty-nine of them (76 percent) came either at the rim or beyond the arc. This is what they do, of course, but rarely to this degree. The Warriors' defense completely failed at making the Rockets beat them from inefficient spots on the floor.

There was also the fouling controversy at the end, but I found this more amusing than instructive in any way.

What a strange game. Samuel Dalembert, the SHOT OF THE CENTURY, tacos, Kenneth Faried trying to take Larry Sanders' head off ... this one was nuts. But the most hilarious part to me is how inept the Brandon Jennings/Monta Ellis pairing was down the stretch when it was so good the rest of the game.

Maybe I shouldn't be surprised by this, because clearly Jennings and Ellis aren't an ideal pairing. But here's what seems especially confusing:

The two players played so seamlessly together early on! The Bucks used their speed to confuse Denver's defense and create tons of open looks. But eventually, as good as they were early, they were just as bad late, jacking horrible shots and dragging everyone down. The duo was a -14 in the last eight minutes, and some of the offensive sets they commandeered were among the worst you'll ever see in an NBA game.

That's pretty much the Ellis/Jennings pairing in a nutshell, I guess.

The tide of this game completely turned when Larry Drew replaced Horford with Johan Petro at the 4:38 mark of the second quarter. At the time, the Hawks led by nine points, thanks mostly to Horford and company dominating Indiana's inept second unit. Horford had played nearly seven minutes without committing his third foul, so there really wasn't much danger. From that point forward, the Pacers outscored the Hawks by 10 points to close the half and take a one-point lead, then carried that momentum forward into the second half for an easy victory.

Drew has done a lot of good for the Hawks this year, but this was a bad decision.

Goran Dragic did absolutely nothing in the first three frames, but scored 15 in the fourth quarter to carry the Suns to a surprising road win. Why did things change? The Suns played Dragic a lot with Kendall Marshall, which allowed Dragic to get his points off weakside movement rather than having to run the offense. Dragic still got the ball more than anyone, but the Suns ran him along baseline picks so that he could attack on the move. Having Marshall at the top of the key gave them that flexibility.

It's an interesting wrinkle to consider going forward. Dragic is obviously the Suns' best creator, but there's an element of his game that gets lost when he has to set everyone else up. Playing Marshall with Dragic allows the Suns to take advantage of Dragic's scoring ability when they need hoops late. It's on Marshall to show enough consistency in his development to make the pairing work all the time.

As for the Grizzlies, it's becoming clear that their problems go deeper than Rudy Gay taking a lot of shots. Marc Gasol in particular looked incredibly disengaged, letting Jermaine O'Neal score on him in a lot of one-on-one situations.

MORE: Bright Side of the Sun | Straight Outta Vancouver

NBA Tuesday: Lakers walk out of Brooklyn with win