NBA scores: Dwight Howard clearly not himself in blowout loss to Celtics

Dwight Howard played through pain in the Lakers' blowout loss to the Celtics, and he clearly didn't look like himself. That and more in Thursday's NBA Scores roundup.

Share All sharing options for: NBA scores: Dwight Howard clearly not himself in blowout loss to Celtics

There's not much to add to the brilliant coverage from Paul Flannery, Celtics Blog and Silver Screen and Roll, but I do want to point out just how inept Dwight Howard was defensively in this one. I'm no doctor, but it definitely seemed like he was suffering through a combination of physical pain and mental indifference. It's not up to me to say which of the two was a bigger factor, so I won't.

So, I'll just point out all the ways Howard hurt his team defensively.

1. Complete indifference to stepping up to defend pick and rolls. 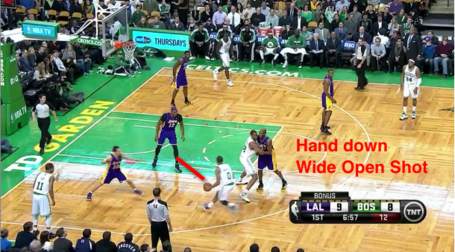 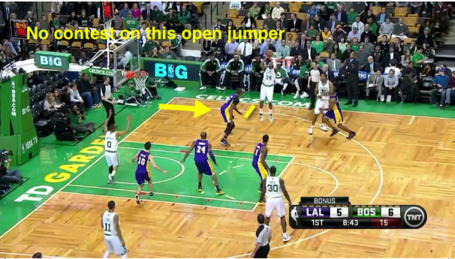 Worse, these open jumpers came when Jason Collins screened out the initial Lakers defender. Collins is an excellent screener, but he's a complete non-threat as a pick-and-roll receiver. Howard should have been much more aggressive trapping the Celtics' ball-handlers.

Here's one play where Howard exhibited poor awareness not running to the rim to protect the basket. As you can see here, he's once again glued to Collins, who is no threat from anywhere, much less on the perimeter. 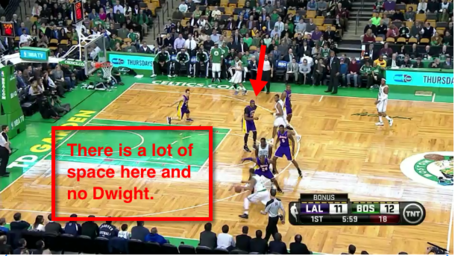 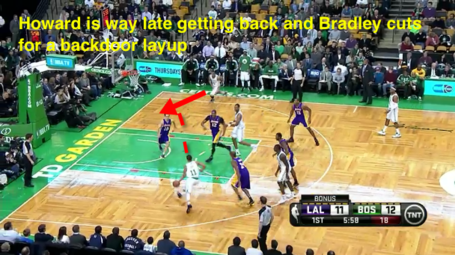 There are a lot of breakdowns on the play, but if Howard just ran back to protect the rim like he should have, none of them would have mattered.

Here's Howard complaining to the referee and letting Kevin Garnett beat him down the floor for rebounding position. 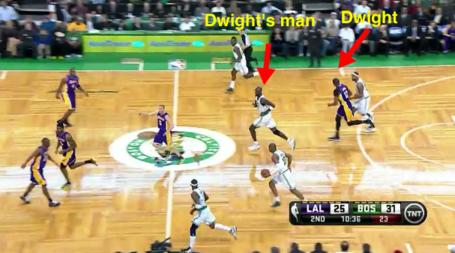 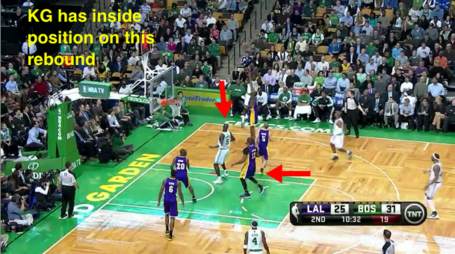 This screenshot is from the same play as No. 3, but it merits special mention. Look at this non box-out by Howard and two other Lakers, allowing Garnett to get the rebound. 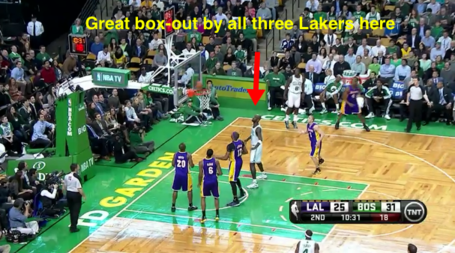 Again: I can't speak to why Howard had all these breakdowns. It seems clear that he's physically impaired in some way, but determining cause and effect is difficult. All I can say is that these breakdowns, while unacceptable, have been all too common this season.

I don't think it was fair to ask Joakim Noah to return from injury for a game like this to defend Kenneth Faried. The tempo is just too fast and Faried is too quick. Under normal circumstances, Noah on Faried is a tough match-up. Under these special circumstances, it's unfair.

Problem is, the Bulls have zero depth up front, so they need Noah badly. A more prudent long-term approach would have called for Noah to sit this one out so he could be healthy for the Jazz on Friday. Instead, the Bulls, needing every win they can get, may have rushed him back too soon.

As for the Nuggets, they continue to dominate at home. They're clearly not as bad as they showed in December, and I'm not sure they're quite as good as they've shown since. Nevertheless, I'm thinking the pendulum swings further in the direction of their recent play than their performance earlier in the season.