Cuba's Alfredo Despaigne: The best reason to watch the WBC is gone

The Netherlands' stunning win over Cuba is a great story, but it also robbed us of one the tournament's most fascinating players.

Share All sharing options for: Cuba's Alfredo Despaigne: The best reason to watch the WBC is gone

It looks like in every World Baseball Classic, a random, little-known player from a team we don't normally get to watch will capture the imagination. In 2009, my guy was Gift Ngoepe, who starred for South Africa. He hit back-to-back triples against Mexico, flying around the bases like a player with 90 speed on the 20-to-80 scale. Who was that helmeted man? Turns out he was in the Pirates' system, and while he's not much of a prospect right now, he was more than a little raw when he signed. There's still time.

(If you want to hop on the badwagon, read this profile in Sports Illustrated. Gift Ngoepe winning the World Series for the Pirates is kind of a personal dream of mine, too. Just not in 2012, like he hoped.)

The most fascinating player this year, though, wasn't an unknown. He was a well-known unknown, a player I was dying to watch. And those dastardly honkbalers deprived us all of more of him. Cuba's Alfredo Despaigne is a one-man answer to why this tournament is worth watching. You might not get to watch him again until 2015, which is something of a crime.

To recap, Despaigne had been an object of fascination for a while. After Yoenis madness swept the Hot Stove League last year, it was natural to look for the next Cuban sensation. The guy who broke Cespedes's single-season home-run record seemed like a good place to start. Power and youth. How could you not be intrigued? And according to John Arguello of Chicago Now, the 26-year-old left fielder was 5'9", 170 pounds. That's my size. The single-season-homer champion was the same size as the pasty blogger who was fascinated with him.

Then the official roster had him listed as 5'8", 214 pounds, which was even better. That's not a man; that's a cube. And that profile fit with the raw power he exhibited in Cuba and international play.

Since then, there have been two changes:

1. Yoenis Cespedes came to Major League Baseball and produced right away, which at least partially suggests that Despaigne might be able to do the same thing.

2. We have video of Despaigne now.

Both changes have increased the fascination. We need to get a Kickstarter going to get the guy an inflatable hovercraft. First the video:

That last one features some A+ watching and preening. Take your time, we don't mind, Alfredo. Or if you want a couple of GIFs from the Cuban National Series, these show how freaky-strong Despaigne is:

In your earhole, physics.

"Dang it. Popped it up. Looks like it's drifting f … wait, no, that's a 330-foot opposite-field home run that I barely noticed."

Now, this is going to be an imperfect comparison because of the different camera angles, catcher/umpire heights, and other unknowns, but it looks like Despaigne might be about 1.4 Altuves. 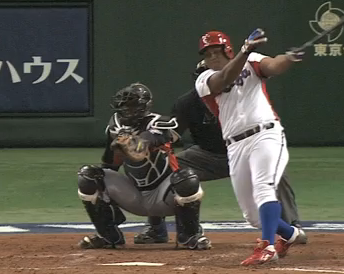 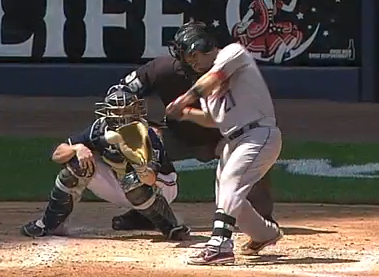 So it's not as if Despaigne's height is the only reason to care. He would be short for a power hitter, but not absurdly short for a baseball player. No, the reason to care is because he has freakish power to all fields, and he's showing it against the same competition that spawned Cespedes.

Maybe Despaigne doesn't want to play in America. Maybe the thought of leaving his family and friends behind -- not to mention the relative superstardom he's likely enjoying in his home country -- doesn't appeal to him. But I hope he's somewhere off the grid in Japan right now, figuring out a way to establish residency in the Dominican Republic. I want to see Despaigne against major-league competition, and I want to see it for 162 games.

I was worried that a closer look at Despaigne would be disappointing -- these things rarely live up to the hype. Except he was even better than anticipated, at least in a short glimpse. He seems like a gap-to-gap hitter with the power of Matt Holliday in the body of a well-conditioned Matt Stairs. Alright, maybe "power of Matt Holliday" like is laying it on a bit thick. But until he comes over to play in the majors, we'll never know. Maybe he has the power of Kirby Puckett in the body of Kirby Puckett.

Where have you gone, Alfredo Despaigne? A nation turns its lonely eyes to you. And when that nation has to go to the bathroom, make a break for it and defect. That might be a selfish request on my part, but once every three years just isn't enough.

• Jurickson Profar for Oscar Tavares? Who says no?

• The Canada/Mexico brawl, and unwritten rules