Share All sharing options for: Greetings from America's Oldest Ballpark

Sometimes you just luck into stuff. A few years ago, my road trip from New Orleans to Atlanta took me right past Birmingham's Rickwood Field, billed as "America's Oldest Ballpark". So of course we stopped, took a bunch of pictures and were even able to have a good catch (if not for long, because it was like, Africa hot that afternoon).

I did see that one coming, though; all along, the plan was to stop at Rickwood and soak in the tremendous history. Last week, I got blindsided by something nearly as tremendous: Bisbee, Arizona's Warren Ballpark.

I'm not going to go into a great deal of depth about Warren today, because I'm hoping that next year my bosses will indulge my desire for a special trip to Bisbee and some real reporting about the ancient yard. Suffice to say that Rickwood's got some competition; while that park opened for business in 1910, they've been playing baseball on Warren Park's grounds since 1909. Now, Rickwood does have some advantages over Warren, especially the fact that Warren's actual structure was completely rebuilt in the 1930s. Still, those grounds have hosted baseball games for one more year than Rickwood's. Which should count for something, I figure.

Anyway, back to lucking into stuff. Last week I was in Bisbee, but I'd completely forgotten about the old ballpark. But just before heading north, I was in a museum and noticed a reference to the old yard and then I remembered. Which was enough to send me searching for the ballpark, which is in the old suburb of Warren, built (unlike Old Bisbee) on flat land south of the part of Bisbee that 98 percent of the tourists see.

I pulled up and the gates were locked, so I resigned myself to looking around outside and taking a few photos through or over the fence. More luck, though: at that very moment, Bisbee High School baseball coach Mike Frosco, who's been skippering the Pumas for more than 40 years, showed up for some field maintenance and graciously gave me the run of the place.

Alas, I did have someone waiting in the car for me, so I couldn't linger for nearly as long as I'd have liked. I did poke around a little, though, and took a few photos. Here's the grandstand ... 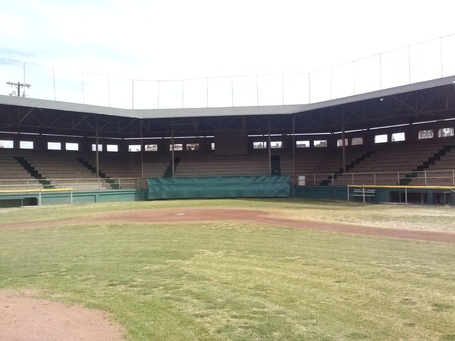 and here's an ancient drinking fountain under the stands: 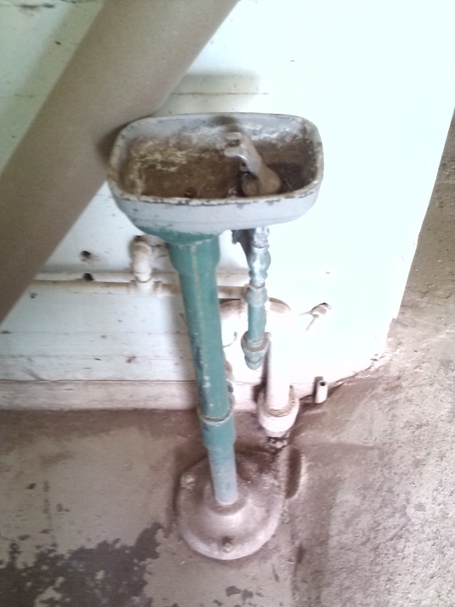 I actually prefer vintage fixtures, but the lavatories are in really bad shape, by most standards. Almost any way you look at it, Warren Ballpark does need a lot of work, if only to keep it from actually falling apart within the next decade or so. And while millions of dollars have been plowed into Rickwood Field -- because of its ties to the Negro Leagues, probably -- very little money seems to have been spent on Warren in recent decades.

As I said, I don't want to delve too deeply today. But this is a ballpark that's hosted a great number of major-league players, including a few Black Sox in the 1920s and various Hall of Famers. I think it's worth celebrating, and preserving. For now, here's a website and a plaque outside, and I hope you'll consider making a small donation to the cause ... 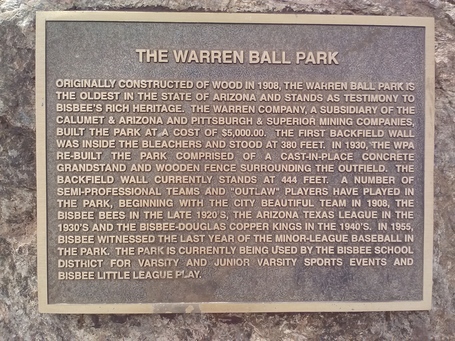 If you just can't wait for my long piece that might never be written, Arcadia has just published an outstanding book about Warren Ballpark.

• Jurickson Profar for Oscar Tavares? Who says no?

• The Canada/Mexico brawl, and unwritten rules