Playing board games with DeMarcus Cousins

DeMarcus Cousins will likely receive suspension No. 4 of the season on Wednesday after clocking Mike Dunleavy on Sunday night. The Hook explains the essence of Cousins via board game simulations.

Share All sharing options for: Playing board games with DeMarcus Cousins

Your semi-monthly DeMarcus Cousins Makes Me Shake My Head update: DeMarcus Cousins' post-script on his Sunday ejection for elbowing Mike Dunleavy makes me shake my head. He claimed Dunleavy instigated the altercation, that he didn't elbow Dunleavy intentionally but was trying to get through a screen, that Dunleavy sold it and that if the Kings were winning everyone would be praising Cousins instead of tearing him down. Fin. Amazing work, Boogie. You've really outdone yourself.

Few basketball fans outside of Sacramento likely watch many Kings games these days on account of them being, you know, a terrible basketball team that hasn't sniffed the postseason in seven years. So while you can follow the adventures of Cousins via the web and snippets on League Pass, you're not getting the full Boogie experience. In an effort to bridge that gap, we staged some simulated board games played with Cousins for today's Hook. Enjoy.

Cousins is rebuffed for his offer of a railroad for Marvin Gardens. He takes this as personal insult and refuses to participate in any trades, except for those involving Get Out Of Jail Free cards, for which he pays top dollar. (The pinnacle is when he trades Park Place for a GOOJF.) Despite this, he spends half of the game in jail. He eventually goes bankrupt after rolling a 12 and landing on Water Works.

As Cousins' first piece approaches his safe zone, an opponent lands on a slide arrow and knocks the piece back to start. Per the tradition of the game, the opponent gleefully yells out "Sorry!" Cousins says, "No you're not, asshole," flips the board and leaves the building.

The players use random placement to begin the game. Cousins draws to go first. All territories have three armies occupying them. Cousins attacks with every one of his seven territories. On five of them, he loses a territory on the first roll but nonetheless attacks again with a 2 vs.3 disadvantage. In all five cases he loses the roll and has one army on each territory. On his other two territories, he successfully gets to 3 vs. 2 after the first roll, but loses the second and third rolls. He finishes Round 1 with seven total armies after beginning with 21. He is eliminated by Round 3. He is not pleased.

DeMarcus Cousins becomes the first player in recorded history to go MOTH --> MOTHER --> MOTHERF_CK --> MOTHERF_CKER. To do so, over a dozen turns he turns in all letters that don't help the cause. And yes, he used a blank on a vowel, which means he is basically the worst. Everyone else is afraid to challenge the word via the official Scrabble dictionary. With a triple word score on the coup de grace, the final word is worth 75 points. Cousins still loses by 150. 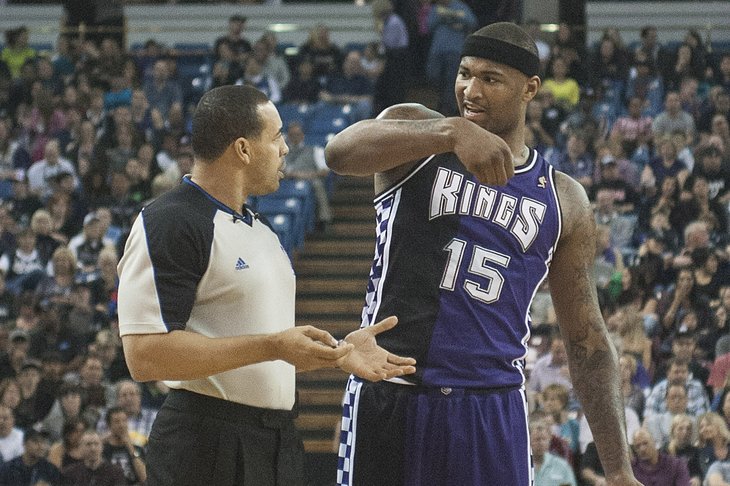 Cousins is well on his way to victory with three safe pieces while no one else has more than one. An opponent dislodges Cousins' final piece in play. Infuriated, Cousins smashes the Pop-O-Matic and stalks off.

Cousins' attempt to stack his first four pieces in a single column is easily blocked. "So that's how you're gonna play, huh? I got you," Cousins sneers. Cousins spends the rest of the game trying to smother the opponents' pieces, never again trying for his own Connect Four. "How do you like that, huh?" he extorts.

After an opponent moves the robber to one of Cousins' hexes and steals an ore card, Cousins calls the police. "I'd like to report a robbery," Cousins says. "Yes, I do believe I am currently in danger, officer. He has a solider card."

The opponent quickly narrows down the field asking the standard questions. Cousins gets frustrated when the opponent has troubled answering Boogie's question of whether his character "looks like a bitch." When the opponent has narrowed it down to one possible candidate, Cousins refuses to admit that he's been defeated as the anxious opponents asks whether his character is Claire on four-straight rounds. "I can't really answer that," Cousins declares. "You need to be more specific."

Someone attacks one of Cousins' positions with support from a third party. Cousins rants about everyone being against him and it not being fair. All further orders issued by Cousins in the game simply say "F--k yourself." The game ends in a draw, because it's Diplomacy and of course it ends in a draw. Cousins never trusts another soul, leading to a distressing seven-year NBA career capped off with an indefinite ban for burning Adam Silver in effigy at center court during the fourth quarter of a Kings vs. Timberwolves game in December 2017.