Searching for a defense of Angel Hernandez

Does anyone like Angel Hernandez's umpiring? An investigation into the obvious.

Share All sharing options for: Searching for a defense of Angel Hernandez

In case you missed it, Angel Hernandez is in midseason form.

Strike. It was the ninth inning, with the tying run on third. If the Dominican team had lost, this would have been a huge deal. Hernandez got a little lucky.

Here's the progression of the pitch: 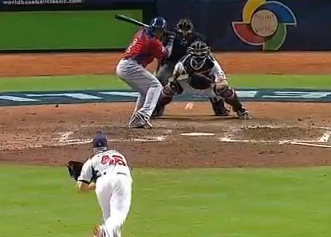 Okay, that could be a strike. 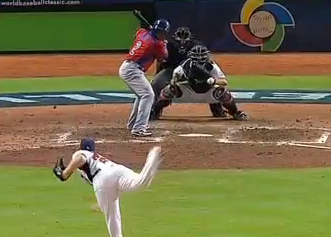 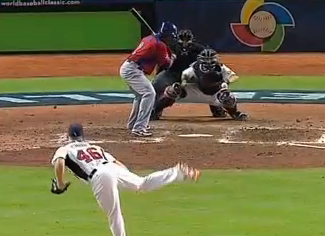 Alright, that isn't a strike. 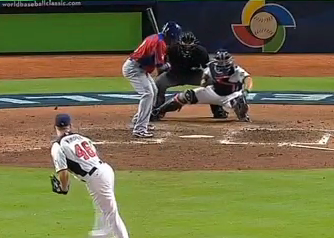 THAT ISN'T A STRIKE. 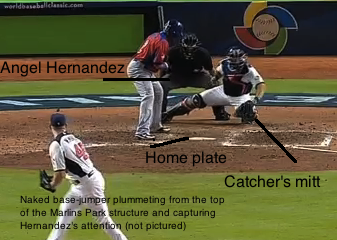 The most telling and/or humorous part? When MLB.com put up the highlight for the Erick Aybar single, they included the whole at-bat. They never do that. Take a look at a similar highlight from the World Series. They pick up the action in the clip from the 3-1 count. The Aybar strike call didn't affect the outcome of the game, but it was still part of the game's story. It was the rolling boulder he had to outrun for the whole thing to be a success. You have to include that pitch to make the single seem like the triumph over adversity that it was.

Now, I'm starting to think that Angel Hernandez isn't a good major-league umpire. Whoa, whoa, sit down. Let me explain myself. It's just a hunch I had. Can't put my finger on it. It might be because of the decades of bad calls, but let's not impugn anyone without all the facts.

Instead, let's look to the Internet to see if there is a dissenting opinion. Is there anyone out there who can make the defense for Angel Hernandez?

Search #1: "Hernandez is an excellent umpire"

Search #2: "Hernandez is a great umpire"

A-ha! Success! Two results! One of the links goes to our very own Red Reporter

Oh. Dang. The other link goes to River Ave Blues, and it was similarly sarcastic. So far, we're not getting any bites, so let's knock down the level of praise.

Search #3: "Hernandez is a good umpire"

Success! The second link on that search leads to a non-ironic mention of Hernandez's talents. There's also a YouTube comment that shows up, and you know that's going to be an erudite and well-formed opinion. This comment used the exact wording of "Angel Hernandez is a good umpire."

You can always count on the people of YouTube to police themselves. What about people who are perfectly okay with Hernandez, but not exactly excited about him?

Alright, now we're straying too far from the original idea. The point is that no one likes Angel Hernandez's umpiring. The Internet is a vast, vast repository of comments about baseball. And other things. But mostly the baseball-related comments. And in that vast repository, there isn't a single person willing to stick up for … wait, hold on, what's this? From the bright mind of Josh Kalk and The Hardball Times?

When you focus in on Angel Hernandez specifically, you find that he grades out as an above-average umpire in each metric of even-handedness. No matter how you slice it, looking at the 2008 PITCHf/x data, Hernandez is a quality umpire among an already amazing group. While he doesn't get every call right, he gets the vast majority correct and his strike zone hardly varies from game to game.

Well, I'll be. And I know better to doubt Kalk when it comes to this stuff -- it's not like he looked at six pitches, wrote an article, and then went out for pizza. Umpiring is a tough racket, and they all make mistakes. When it comes to balls and strikes, it sure seems like Hernandez is one of the worst, but when you dig into the data … well, now I'm not so sure.

At the very least, he blew a call on Thursday night, and it was a true blown call -- an 80 on the 20-to-80 blown-call scale, just behind Jerry Meals and the 2011 Pirates. Maybe he's not really that bad. That study is interesting. But what we know is that for a few seconds on Thursday, Angel Hernandez was the absolute worst.

• Celebrating the Awful Trades, Vol. I

• Who’s the best baseball player in the world?