The field of 64 is set for the women's tournament, which kicks off March 23.

The committee has spoken on Selection Monday and the field is set for the 2013 NCAA Women's Tournament. The top seeds were awarded to Stanford, Connecticut, Notre Dame and Baylor, with the Lady Bears awarded the No. 1 overall seed for the tournament.

Baylor will be going for its second consecutive title, and third overall, in Brittney Griner's senior season. In January, Griner broke the NCAA record for blocks, a record she will surely build on in the tournament. Notre Dame will be attempting reach the final game for the third year in a row, while UConn has reached the Final Four every year since 2008.

Having split their season series, Cal and Stanford are in the same region as the No. 1 and No. 2 seeds. It would be a fascinating Elite Eight matchup if both teams can get through their first three games. 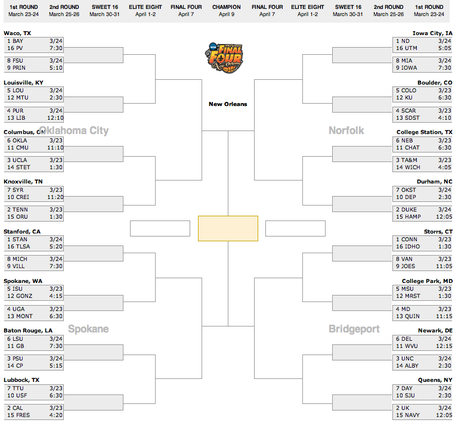 The entire tournament bracket can be found here.

The first two rounds of the tournament will be held March 23-26 at gyms across the country. The winners of the East, West, South and Midwest brackets will meet in the FInal Four in New Orleans on April 7-9. For complete coverage, including bracket breakdowns and upset picks, head over to Swish Appeal.

• Everything you need to know about the NCAA bracket