You're trapped in a sports bar for a month now. Survive and advance.

Buffalo Wild Wings is the official home of March Madness. This means you, like every American, will be literally trapped inside a Buffalo Wild Wings for the next month, since no one may leave a Buffalo Wild Wings once the event has started, and may not be allowed to leave for some time. It is a brilliant business model and a civil rights violation, and that's what makes it a particularly American success story.

You will have to survive. Things will get real in a hurry inside the Buffalo Wild Wings inside of a week, and then perhaps even faster if you are in one in Ohio or Florida. You need to plan early, and then stick to that plan once the people stop being polite, and start being cannibal survivalists trapped in a chain restaurant with only alcohol and fried food to survive on.

A MAP FOR SURVIVAL IN THE BW3 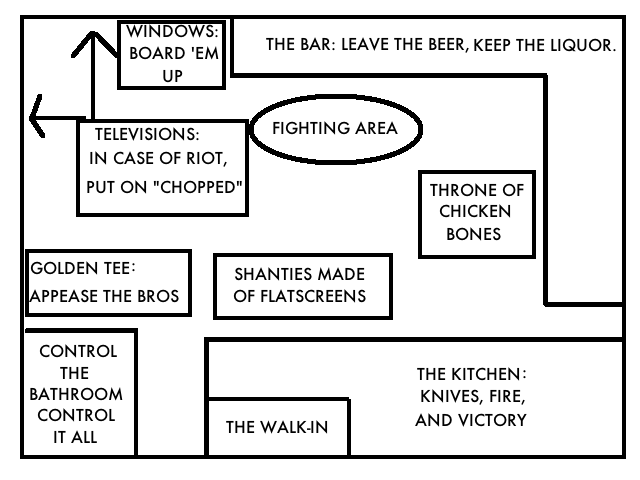 THE FIRST ROUND OF 64

Louisville vs. NC A&T. Control the bathrooms and you control the BW3. Louisville in a walk.

Colorado State vs. Mizzou. Take the liquor, but let them have the beer taps. They will run out quickly, while liquor serves both as bribe and molotov cocktail. Um, Colorado State because Mizzou is an SEC team.

Oklahoma State vs. Oregon. Make friends with the cooks. One of them has probably done some time and knows how to take care of themselves in close quarters. I take Oregon because, um, uniforms. I have watched two college basketball games this year.

Saint Mary's vs. Memphis. Factions will form quickly. Divide them with bribes of jalapeno poppers and conquer. Saint Mary's wins because Memphis is undoubtedly tied up in some weird points-shaving scandal because they are located in Memphis.

Michigan State vs. Valparaiso. I understand the Big Ten is good at basketball, which is proof college basketball is weird. Michigan State wins. Take control of the remote controls immediately.

Creighton vs. Cincinnati. Once you have control of the bathrooms, work to control the kitchen, or at least the walk-in. In hell this is a Showcase Showdown vacation package, but we'll take Cincinnati because you can jump into a slightly warmer river to escape.

Duke vs. Albany. ALBANY THERE IS NO OTHER CHOICE. Find the person with the Duke jersey on and exile them to the roof. They have no life skills and cannot help you in your new post-apocalyptic Buffalo Wild Wings future.

Gonzaga vs. Southern. Controlling the televisions is important. If unrest breaks out, control the populace by putting on Chopped, because everyone can unify in their irrational love of Chopped. She didn't plate in time! OH MY GOD. Gonzaga wins because I've heard of their basketball team.

Wichita State vs. Pittsburgh. If water runs short inside the BW3, stick a pebble in your mouth. I don't know if this works but it was in the 1968 copy of the Boy Scout Handbook I had, a book that probably is responsible for hundreds of deaths in the wild. Wichita State wins because I cannot root against a Shocker.

Wisconsin vs. Ole Miss. Liberate the video games immediately to distract and appease potentially angry citizens. Nothing good ever happens to Ole Miss, and you know this is true in your heart. Wisconsin wins.

Kansas State vs. LaSalle. In desperate situations, stale flatbread may be formed into a sturdy shiv. Kansas State advances also because we've heard of them.

Belmont vs. Arizona. Torture is unethical, so do not put on the "Broadway Medley" channel on the satellite radio unless you absolutely have to. Belmont wins because Arizona's mascot terrifies me. 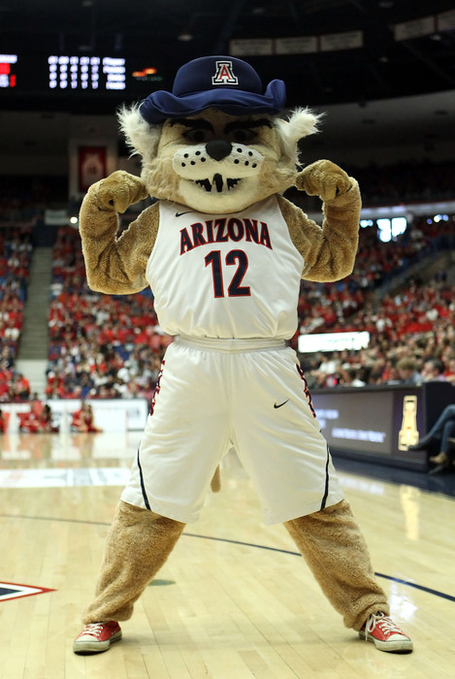 WHERE ARE HIS EYES

New Mexico vs. Harvard. Dim the lights from 11 p.m. to 7 a.m. to simulate darkness and keep everyone on a somewhat normal sleep cycle. New Mexico advances because your rowing skills are useless in the desert, Harvard boy.

Iowa State vs. Notre Dame. Be wary of "accidental" glass breakage: that person may be creating a sharp object to kill you with! Notre Dame wins because historically they save sporting failure for big stages, not opening rounds.

Ohio State vs. Iona. Ohio State advances. If someone in your BW3 is an Ohio State fan, tell them to take that backwards fitted off, it looks terrible and they'll regret wearing it like that when they're older. This has something to do with survival, because you want people to believe they will one day escape the Buffalo Wild Wings.

Kansas vs. Western Kentucky. Morning workouts will help maintain morale and overall health. Perform basic maneuvers in groups that everyone can do. Kansas wins because I am an expert and know that they are good at basketball.

North Carolina vs. Villanova. Grab the gift cards ASAP. THEY ARE YOUR NEW CURRENCY. Villanova wins because I don't trust coach Larry Fedora and the spread offense in this matchup.

VCU vs. Akron. If Shaka Smart is in your BW3, make him your new leader. He will lead you to survival. VCU wins.

Michigan vs. South Dakota State. If someone knocks on the door of the BW3, do not open it. They probably have the plague, or are a zombie. Michigan wins because again, the Big Ten has to be good at something.

Minnesota vs. UCLA. You might think a "Hunger Games" setup would pass the time, but you'll be horrified at how long it takes to kill someone with just knives and barstools. Speaking of places where people get killed with barstools and knives: Minnesota, for the win!

Georgetown vs. Florida Gulf Coast University. If conflict results in damage to the BW3's roof, flatscreen televisions can be arranged into a cozy shelter in mere minutes. FGCU advances due to me being fond of vaguely accurate geographical names for places. 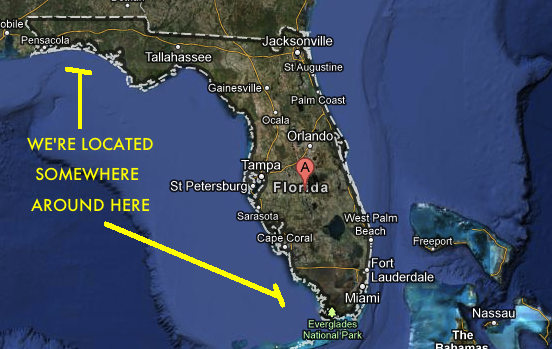 Indiana vs. James Madison University. If someone tries to criticize your leadership decisions, rebut with "THERE'S NO TIME FOR DEBATE!" It wins every argument in a survival situation. Indiana wins because Tom Crean has an awful haircut, and in college basketball the coach with the worst hair wins the tournament every year.

Temple vs. NC State. Keep stripped wing bones for use in building body armor. Temple is from Philadelphia, so I assume they have this game fixed already, and therefore advance.

California vs. UNLV. Stage emergency drills for "when the jerks from the Hooters attack us." There might not be a Hooters nearby, or a real threat, but a scared tribe unified against a common enemy is a tribe that is not planning to overthrow you. UNLV wins because I remember they used to be really good and corrupt.

Syracuse vs. Montana. Do you have someone from Montana in the BW3? Keep them out of the air vents, or they'll live up there for weeks and remain a threat as experienced survivalists by upbringing. Jim Boeheim quits midgame and Syracuse wins anyway.

Bucknell vs. Butler. Butler advances because bulldogs are adorable. If you find yourself in a melee combat situation, wad up sugar packets in your fist to add some heft to your strikes. (Every bit counts in a survival situation.)

Davidson vs. Marquette. NO SUBSTITUTIONS. Survival situations mean that burger's coming with fries, buddy. (Answer: THERE'S NO TIME.) Marquette advances because, um, checkerboard patterns on uniforms or something.

Illinois vs. Colorado. Illinois advances because they need something to live for in Illinois. You really should have given everyone in the BW3 a fake name to avoid criminal charges after this blows over.

Miami vs. Pacific. Once the BW3 is liberated, leave the country for several months. Or go to Miami, which is basically just as good.