One of the top 10 teams in the NBA also happens to be the fourth-youngest. Are they the next Thunder? Plus, The Hook looks at how well some of the better recent NBA squads are aging and explores the magic of the Spurs.

Share All sharing options for: How the best and worst NBA teams stack up in terms of age

An unavoidable truth of the NBA is that older teams win more games. The correlation between age of a team's players and on-court success has been around forever, and it's unlikely to ever change. There are a few reasons it exists:

1. Players typically peak from age 26-29. The current average age in the NBA weighted by minutes played is 26.7. So the generally accepted peak period skews toward the older range. Most of the league's best players are older than league average. Last season, eight of the 15 All-NBA members were older than league average -- despite it being a golden era of young stars.

2. Lesser teams skew younger because they often focus on talent development instead of grabbing every possible win. You'd rather play your raw lottery pick than your 29-year-old free agent to be if you're 20 games out of the No. 8, right? Young players are almost always cheaper than veterans, as well.

3. A cousin of that point: Team payroll also correlates with quality as franchises closer to contention are more willing to spend money to improve at the margins. Teams like the Bobcats don't chase Kenyon Martin in January.

4. Good teams are kept in one piece. Bad teams aren't. Those good teams typically center on cores of 2-4 players; getting older is a human reality for every man, including these athletic superheroes. So the Heat are getting older so long as the core stays together and the peripheral pieces don't change dramatically. (We'll see a wonderful exception to this soon.) Meanwhile, there tends to be more frequent churn for bad teams. Because the draft is a huge piece of team-building, that churn tends to keep teams young until they find a winning combination.

So that's why the correlation exists. How does it look right now in the NBA? Quality is represented by average points margin. Data is from Basketball-Reference before Wednesday's action. 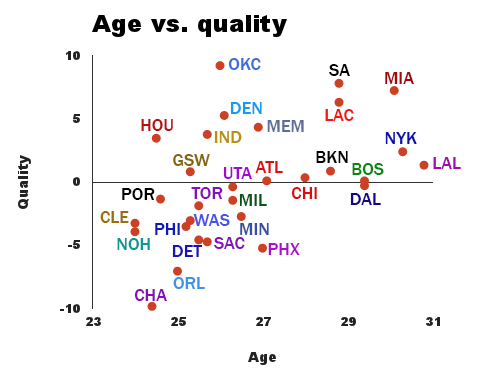 You can see the general form of the correlation. The bottom left zone is reserved for bad, young teams. The upper right is for older, better teams. You'll notice a relative dearth of action in the top left (young and awesome) and bottom right (old and awful).

There are some interesting outliers and other situations to look at.

1. The Rockets are the fourth-youngest team in the league and, by scoring margin, the eighth-best. That's pretty darned amazing. Most of the core is locked up for the next few years, and the team has a ridiculous number of young assets. Houston doesn't have a second or third star to be considered the next Thunder, but dang. Daryl Morey did work. (Kevin McHale did, too.)

2. The Thunder have for three years been an anomaly: one of the best teams in the league, and one of the youngest. Oklahoma City is slowly getting older -- Kevin Durant, Russell Westbrook and Serge Ibaka have not frozen time, and the James Harden-Kevin Martin swap added a couple years on the sixth man spot. But the team is elite and still younger than average. And this is the Thunder's third year in the elite ranks. The championship window is absurdly wide open.

3. The Nuggets aren't really much of an outlier, but man, they are a lot younger than you'd think. Denver has a weighted age of 26.6 years old; they were a year older (27.7) in 2009 when the Nuggets made the Western Conference Finals. So in four years of transition, Denver has gotten better and younger. Impressive work. But it doesn't hold a candle to ...

4. THE SPURS! Look at the team quality graphed against team age since 1999. 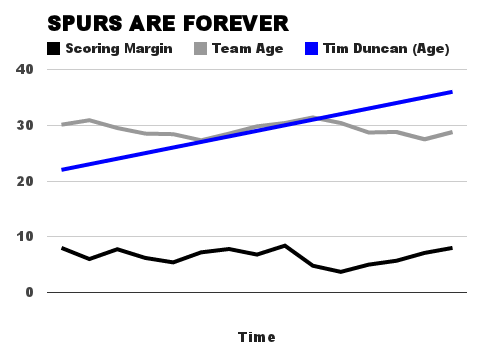 San Antonio has been consistently excellent over the past over the past 15 years. They have been anchored by Tim Duncan, one of the greatest players ever, that entire span. Yet every few years the Spurs find a way to get younger and survive. How many times have Gregg Popovich and R.C. Buford reopened the championship window now? And it's all about deft drafting (Tony Parker, Kawhi Leonard), canny acquisitions (Bruce Bowen, Stephen Jackson), excellent player development (Danny Green), legendary coaching and having perhaps the perfect superstar in Big Fundamental. This is the Law of the Spurs: no laws apply to the Spurs.

5. Our look at age and quality isn't all rosy: Phoenix is just about league average in age ... and one of the worst clubs in the NBA. There's a relative dearth of promising young talent outside of the Morris twins. Goran Dragic is almost 27. Injured Channing Frye is nearly 30. Jared Dudley is 27. Marcin Gortat is 29. When you consider how much the Suns need to improve to join even the playoff conversation, all of those players could be in their 30s by the time rebirth arrives. That's a bad place to be. Methinks building around Wes Johnson and Michael Beasley is a bad idea.

6. Moving up the chart, check out how old Miami has gotten! LeBron James and Chris Bosh are smack dab in their primes, and Dwyane Wade is in the tail end of his own. With the exception of point guard Mario Chalmers and Norris Cole, the rest of the squad is made up of aging vets like Ray Allen and Shane Battier. It'll be interesting to see how the team restocks the rotation going forward. Battier and Allen are locked in for a bit, but Mike Miller could be an amnesty case. Will the Heat replace him with a bit of youth to stretch this out?

7. The Lakers are indeed the oldest team in the league, more senior than even the Knicks. In fairness to L.A., this is primarily because the oldest Knicks are having trouble staying on the floor. (The 40-year-old Kurt Thomas is now injured; never fear, because Jason Kidd is healthy and turns 40 on Saturday.) The fact that the Lakers are the oldest and most expensive team in the league yet sit on the playoff fringe is pretty amazing and not in a good way. At least they have Dwight Howard. (Which is something it's been rare to hear this year.) (And one: I don't buy that the oldest team are necessarily more injury-prone as a rule. Look at the Cavaliers, the league's youngest team. Has any squad suffered more injuries than them? Young as well as old have been afflicted in Cleveland.)

8. Ah, the Celtics and the Mavericks: both totally mediocre according to scoring margin, both aging fast. Boston replaced the aging Ray Allen with the aging Jason Terry (35 years old). The Mavericks have been transitioning, but also picked up Chris Kaman (almost 31) in free agency and Elton Brand (34) off of amnesty waivers. They have also used Derek Fisher (74) and Mike James (37, no joke, he's 37) this year. But the circumstances of their locations make these cases different: the Celtics are actually competing for a potential No. 4 seed, while the Mavericks have no chance of making the postseason. Both teams have a good bit of flexibility to change rapidly when the run is officially over (my guesses: 2014 in Boston, ASAP in Dallas).