The good news for writers is that we get to re-use all of our Roy Oswalt headlines from last year for Kyle Lohse. The headline on my last article on the subject -- "Oh, God, Make It Stop, Kyle Lohse, I Just Want to Sleep" -- was pulled directly from a similar article about Oswalt last year. The situations are a little different, but the main thrust is the same: It's March, and there's a talented, second-tier starting pitcher still on the market.

But hold on, there, writers. Don't use those headlines all up, because there's another entrant into the just-sign-somewhere-you-jerk derby. And it's Roy Oswalt. From MLB Trade Rumors:

Free agent righty Roy Oswalt is working out at Mississippi State and waiting for the right offer from a contender, agent Bob Garber of RMG Baseball tells MLBTR. Unlike a year ago, geography will not be a factor for Oswalt. Instead, he's focused entirely on pitching for a contender. Oswalt would be open to late inning relief in certain cases, though he prefers to start.

There was a lot of digital ink spilled about Oswalt last year. Where will he go? Who wants him? What team is the best fit? What team that fits well for Oswalt would fit Oswalt well? Is Oswalt looking at the Braves right now, DON'T LOOK, just peek and tell me, I mean, whatever? Then, after all that, Oswalt signed and almost immediately stunk the joint up in Texas. After about a month, he was locked in back-of-the-bullpen purgatory. He made the postseason roster, but just barely.

If you want to focus on how bad Oswalt was last year, there are the standard numbers: His ERA was 5.80, and he allowed 11 homers and 79 hits in 59 innings. This was just 14 months removed from a time when everyone was included Oswalt among the Phillies' "Four Aces". He didn't look like a pitcher contemplating retirement; it looked like retirement was contemplating him, whether he liked it or not.

Except we're talking about 59 innings, in which all sorts of weird things can happen. And weird things did happen. Oswalt had the highest strikeouts-per-nine-innings since his rookie season. Now, some of that's because all the extra runners meant he was facing more batters in each inning, but his strikeout rate was still higher than normal. His swinging-strike percentage was his highest since 2004. Hitters were swinging at more of his pitches than ever before, and they chased more pitches out of the zone than any season since 2007.

If you believe in xFIP -- Expected Fielder Independent Pitching, which adjusts for home runs -- Oswalt has rarely been better. His 3.27 xFIP was his best in a decade. But you're right to be nervous about wholly trusting a statistic that tells such a different story.

Could mean everything. Could mean absolutely nothing. His ERA when starting was 6.36, by the way. Which is relevant. Unless it isn't.

So when it comes to Oswalt, you have to choose between the small samples. You have to use a sliver of evidence to extrapolate into something bigger, and here are your choices:

1. Choosing to believe he's awful now
Fair enough. Those 11 homers didn't hit themselves, and while his velocity was the same as in 2011, it was down from his peak. Oswalt allowed a homer to Maicer Izturis, who had two all year. What does a home run to Maicer Izturis look like? 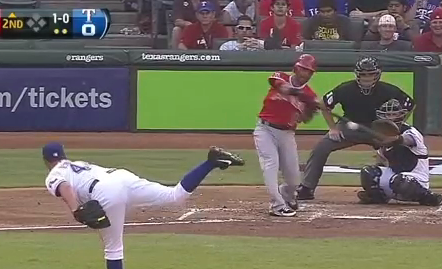 That was a fastball at 90. It was perhaps -- perhaps -- in the running for the most hittable pitch of the year in either league. It certainly wasn't anything you expected to see from Oswalt in 2009 or 2010. So maybe he's awful now.

2. Choosing to believe he ran into bad luck, and/or the layoff hurt him
The latter part is especially important, as we're talking about a pitcher who didn't get spring training. He didn't get to work on the things that weren't feeling right, and he didn't get to make adjustments if his fastball wasn't moving like it was supposed to, or if he was hanging an extra curve for every 10 thrown.

And "bad luck" has a stigma attached to it, as if the argument is that Oswalt wasn't doing anything wrong. No, bad luck is more about the absence of good luck. Do you think Maicer Izturis got similar pitches somewhere within the 1,234 he saw last year? Probably. But he hit only one of those other pitches for a home run. A pitcher can usually get away with a pitch like that to Izturis without it leaving the park. Oswalt didn't. If not bad luck, that's the absence of good luck.

3. Choosing to believe those starter/reliever splits are meaningful
It's a stretch, but the idea of a strike-throwing, late-inning guy with the potential of something more has to be appealing to a few teams. The conversion to a full-time bullpen slot would return a couple miles to his fastball, most likely. Every formerly great starter should try a little bullpen work before they're forced to shuffle off this mortal mound.

Three small samples. You have to pick which one to believe. This is a window into your soul. Oh, one last piece of information: In the 2,154 innings before he joined the Rangers, Oswalt was really, really, really good. That might work as some sort of tiebreaker.

If I'm the Indians, or Royals, or the traveling barnstorming team that Kyle Lohse is putting together to play at county fairs, I'm interested in Oswalt. Oh, my, how I'd be interested in Oswalt. Maybe he really is that bad now. But when the alternative is going with what you have, giving up a prospect for Chris Capuano, or giving up a pick and several million for Lohse, Oswalt might be the most reasonable solution out there for a team still looking to improve their rotation.

Now, why he always waits until March to decide he's curious about playing again, we'll never know. He needs to work on that next year.

• Aroldis back to the bullpen

• Chone Figgins hardly the first of his kind

• Why do the Lords want to soak their employees?