The Heat's broken streak may be the big story, but for Bulls fans, Wednesday's victory provided much-needed relief in a trying season without their star.

Share All sharing options for: The Bulls' win over the Heat wasn't just another regular-season game

Grant Park was empty Thursday morning in Chicago just as it is most Thursday mornings. Maybe some runners and some pigeons and a few stray walkers, but nothing more. There certainly wasn't a stage and a microphone and 50,000 people wearing red and white singing the words to the Bulls-themed version of "YMCA" -- and yes, that is something that exists.

But you'll have to excuse Bulls fans for a moment if they might have felt compelled to show up at the South Loop park, the site of the '90s championship parades Johnny "Red" Kerr once deemed an 'annual' occurrence.

Tom Thibodeau might tell you that what the Bulls did on Wednesday, defeating the Heat, 101-97, and snapping Miami's 27-game winning streak, was just another victory on the schedule, a 'W' that counts the same in the standings as one against the Timberwolves or Warriors. After all, Thibodeau wouldn't even acknowledge Miami's streak before the game. But for 48 minutes inside the United Center on Wednesday, there wasn't a single person willing to buy Thibodeau's spin.

The tension, the electricity, the never-ending desire in this city to protect Michael Jordan's throne and thwart LeBron James' path to greatness -- it all amounted to the type of atmopshere usually reserved for a critical postseason contest.

Taj Gibson said it himself after it was all over: "It felt like it was a playoff, championship game."

The Bulls did it. They actually did it. 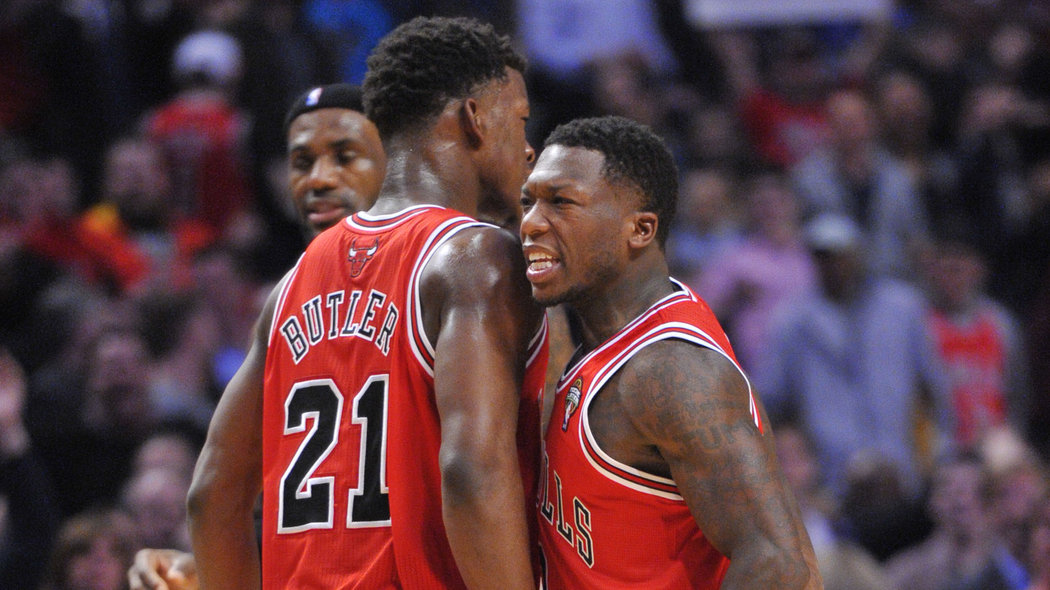 He wasn't wrong. The United Center has been a dull place this year, and for good reason. It feels like a building missing an essential part of its soul. That's the power of superstars in the NBA, and the Bulls were robbed of the one this city helped raise and nurture when Derrick Rose tore the ACL in his left knee during Game 1 of last season's playoffs. The ghost of Rose has been omnipresent throughout the Bulls' roller coaster season, and the last few days have been no different.

Rapper Waka Flocka Flame tweeted Rose was coming back vs. Miami on Tuesday night -- of course he did -- only to get everyone's hopes up before Rose delivered his latest batch of quotes that make it seem like a mathematical certainty the star guard is set to willingly sit out this entire season. It's felt like the only thing in Chicago basketball worth talking about for so much of this campaign. Everyone wants to know when Rose is coming back, the on-court action feels secondary.

So maybe it's fitting that just as Chicago seems resigned to a Rose-less season, the Bulls turned in a gritty, downright inspirational effort that acted as a callback to the not-long-ago past when the Bulls and the Heat were slugging it out in the playoffs for Eastern Conference supremacy. It was a beautiful thing to witness.

The Bulls have had their fair share of success against the Heat, at least in the regular season, but it's different this year. Omer Asik was pried away by Daryl Morey's poison pill, Kyle Korver was traded for salary relief, C.J. Watson and Ronnie Brewer were unceremoniously kicked to the curb. Yes, the Bulls already clawed out one win against Miami earlier this season, but that was before the Heat started rolling.

If there's one thing that's been reinforced time and again during Thibodeau's reign as the Bulls coach, it's that you can never count out his team.

When news came out just before tipoff that Chicago would be without All-Star center Joakim Noah as well as guard Marco Belinelli, the Bulls' chances of stopping the streak seemed impossibly remote. There wasn't any reason to think a team starting Nazr Mohammed and giving quality minutes to Daequan Cook would have a prayer. But if there's one thing that's been reinforced time and again during Thibodeau's reign as the Bulls coach, it's that you can never count out his team, no matter how unfeasible the circumstances may appear.

What happened last night was 'ThibsBall' at its finest. It was Chicago Bears basketball through and through. It started in the first quarter with James barreling down the court, seemingly ready to dunk on Kirk Hinrich's head before the maligned and oft-injured Bulls guard flipped the switch: he tackled James in the open court, setting the tone for an ultra-physical contest and stirring the UC crowd into a frenzy.

It was the dominant theme of the night, one that harkened back to the days when the Detroit Pistons used to do the same thing to Michael Jordan. 'No easy buckets' has always felt like Thibodeau's matra, and it was out in full force on Wednesday. LeBron was hit and hit hard whenever he came into the paint. Jimmy Butler raced down court to stop a Dwyane Wade fast break with a hard foul in the fourth quarter. Hinrich tore the ball out of Chris Bosh's gangly arms in crunch time to help seal the victory.

The Bulls knew they couldn't run and jump with the Heat on Wednesday -- no one can. Hitting them in the mouth was the next best thing.

Chicago's resiliency throughout the night isn't to be discounted. The Heat have found themselves trailing so many times lately during their 27-game winning streak, only to wrestle victory out of the hands of defeat. They overcame the night of Jeff Green's life to get win No. 23 in Boston. They fought back from a 27-point deficit inside of a toxic atmosphere in Cleveland to get win No. 24. Throughout most of Wednesday, everyone sat back waiting for the Heat to make their run. As the game went on and the Bulls continued to incrementally build their lead -- up six with six minutes left, up eight with seven minutes left, up nine with four to go -- much of the talk on Twitter was about how legendary this comeback would be for Miami. The Bulls had other plans.

A 32-point fourth quarter is a tall order for the Bulls regardless of the competition -- they entered the game at No. 24 in average points scored per 100 possessions -- but to see it happen against a Miami squad defending a streak it embraced and tried to protect with all its might is truly a ridiculous proposition.

Luol Deng was amazing, hitting back-to-back three-pointers to spark the offense. Butler was huge and continued to reinforce that he'll be a very good player in this league for a long time, hitting a corner three, defending Wade as tough as anyone ever does and using those young legs and that boundless athleticism to wreak havoc on the boards. Even Carlos Boozer was making plays; his line of 21 points and 17 rebounds didn't feel as hollow as it sometimes does. This was a true team effort.

And that's the only way you're going to beat the Heat, isn't it? Their individual defenders are able to lock down just about any scorer in the half court. Miami will murder you if you turn the ball over and let them get in transition. The only way to beat them is by swinging the ball, spacing the floor and hitting open jump shots. The Bulls are not a good three-point shooting team, but the shots fell on Wednesday. They finished with 27 assists to the Heat's 15. And even without Noah, the Bulls still held a 43-31 advantage in rebounding, same as it ever was.

It's a testament to power of Thibodeau and the roster creation of John Paxson and Gar Forman. It's easy to mock management's dedication to drafting and developing players whose top ability appears to be 'effort', but this team unquestionably responds to Thibodeau's strident demands so impressively. A previous edition of the Bulls used to tune out the fiery Scott Skiles. Now when Thibodeau yells, the Bulls take it as a challenge.

It's been such a hard season for Bulls fans, but Wednesday night was an oasis that felt like it made all of it worth it. It's a strong reminder that this team won the most games in the NBA each of the last two seasons. Without its starting backcourt and starting center, the Bulls ended Miami's streak. It wasn't a playoff game, but it sure felt like one.

Ricky O'Donnell is an NBA assignment editor at SB Nation. Email at richardpodonnell@gmail.com or follow on Twitter.

• Ziller: Kobe did it again, gets away with blatant foul

• The Week in Worst: So many terrible passes