Transition defense: The key to the Bulls' win over the Heat

How did the Chicago Bulls snap the Miami Heat's 27-game winning streak? By doing everything they could to not let the Heat get into the open floor.

Share All sharing options for: Transition defense: The key to the Bulls' win over the Heat

There are many reasons why the undermanned Chicago Bulls were the team to stop the Miami Heat's 27-game winning streak. Some of these reasons (hot shooting by Luol Deng, a second-quarter explosion from Nate Robinson, natural regression to the mean from a Heat team that now knows it can't rely on second-half comebacks all the time) are one-time things. Other reasons (Chicago's rebounding advantage, their ability to read Miami's misdirection offensively) are potential harbingers for the future.

But the most instructive thing about this win was Chicago's transition defense. If anyone is going to beat Miami in May and June, they must replicate Chicago's strategy here.

All that explains why Miami's half-court offense is so tough to stop. That's why it's imperative to take away transition opportunities.

Tack on easy buckets caused by fast breaks to that devastating half-court offense, and the Heat are completely unstoppable. Nobody can contain Miami's shooters when they have man disadvantage, much less LeBron coming at you in the open court. But with smart court positioning, a team can ensure that it has enough men back on defense to cut off any transition opportunity and force Miami to play a half-court game. They might lose anyway, but at least they lose on their terms, not Miami's.

Doing so requires a lot of discipline, something the Bulls have in spades. In these next few clips, watch how Tom Thibodeau's team cedes the offensive glass in order to have several players back to prevent the Heat from running off missed shots. Chicago only allowed Miami to get transition points off missed shots four times in the game, and three of those were plays where Chicago fouled to force free throws. These clips will show you why.

For starters: the Bulls had a rule to have at least two players drop back immediately and a third start his retreat when a shot went up rather than crashing the boards. Throw in the shooter, and Chicago strove to, whenever possible, have four players back before Miami started changing ends.

This applied both to jump shots and layups. Here's an example of the former. 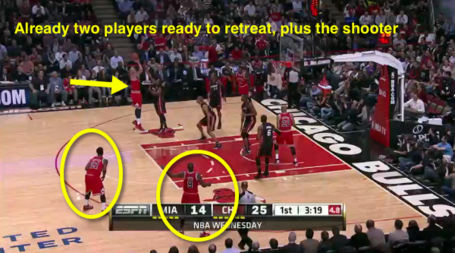 Before Carlos Boozer even releases this jump shot, Jimmy Butler and Luol Deng are beyond the three-point line. Both have nobody boxing them out, but neither is interested in getting an offensive rebound.

As we roll forward, keep an eye on Nate Robinson. 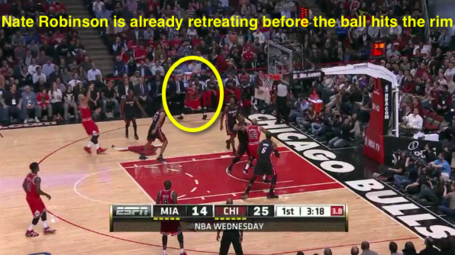 Boozer's shot has yet to hit the rim, and Robinson has already begun retreating from the corner to provide additional help. Throw in Boozer, who is stepping back once he released his own shot, and the Bulls will have four players well behind the ball before Miami even grabs the rebound. 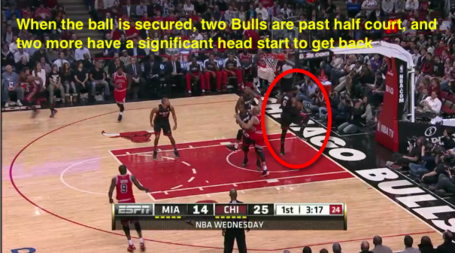 One Heat player leaks out, but it hardly matters. The Bulls already have two players beyond half court at this point, and two more that have a significant head start on the four Heat players going after the board. This is the end result. 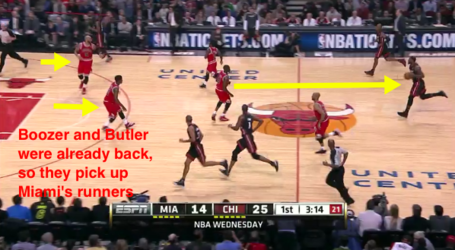 Chris Bosh may outrun Taj Gibson, the lone Bull crashing the glass, but it hardly matters, since Boozer and Butler are there to pick up any Heat player that goes to a threatening position.

The same concept applies when a Bulls player drove for a layup. Notice the plan when Daequan Cook drove in the fourth quarter. 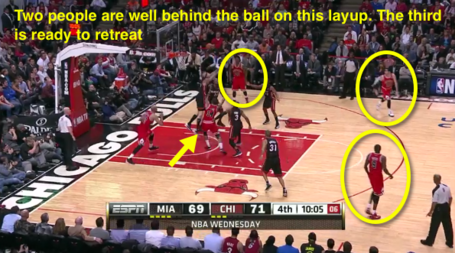 Deng and Kirk Hinrich are in retreat position already, and Butler will drop back slowly rather than chase the offensive rebound. That sets up the following screenshot. 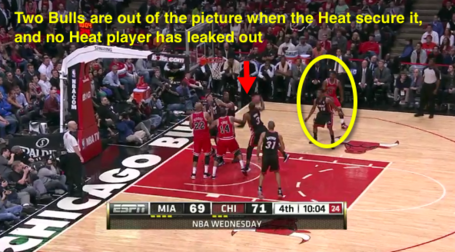 Even on a layup, there are two Bulls out of the picture. All five Heat players are going for the rebound, so this is a tremendous advantage for the Bulls now that Dwyane Wade has secured the rebound. It's much harder to create a fast break when the numbers are not in your favor.

Sometimes, the Bulls dropped even more players back. Look at how the floor is aligned on this Gibson baseline jumper. 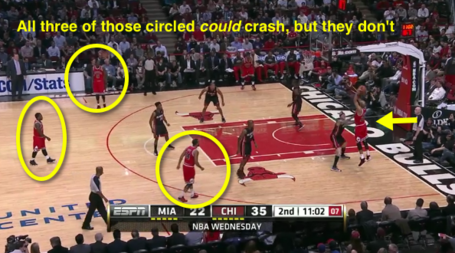 A shot on the baseline can potentially leave a team vulnerable in transition because it's nearly impossible for the shooter himself to drop back properly. To combat this, the Bulls make sure that all three perimeter players standing near the top of the key drop back, even though nobody is putting a body on them. Cook in particular (circled near right) could dart behind Wade and fly in for a rebound, but he doesn't.

Because of that, the Heat cannot generate a transition opportunity on a play they normally would. 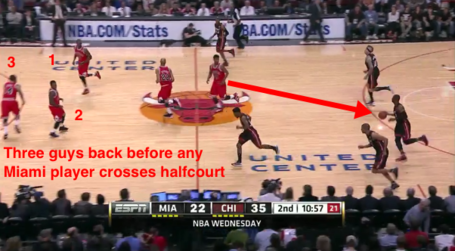 Another striking thing about the Bulls' strategy: how willingly their big men bought in. Interior players naturally want to crash the glass because they are judged on rebounds, so asking them to sacrifice opportunities for the good of the team can be dicey. But Tom Thibodeau found a way to get through to Gibson and Boozer in a way that often saved his team on Wednesday.

Here's an example where Gibson retreated instead of going for an offensive board. The lane is wide open, so Gibson could easily argue to himself that he has an opportunity to secure the rebound. Instead, though, he drops back. 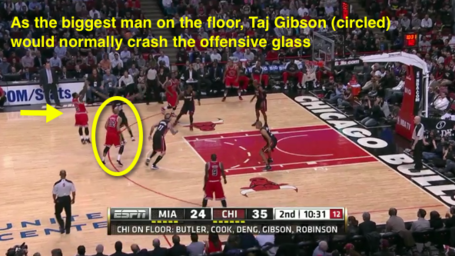 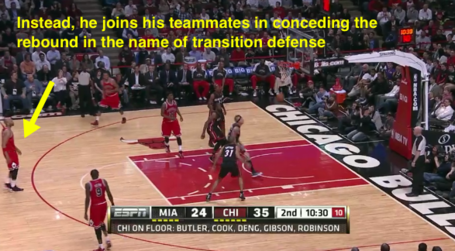 That discipline proves to be important because it sets up the Bulls' transition defense nicely. 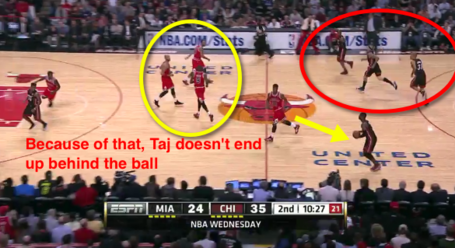 Butler picks up the ball, Robinson is back to eventually cut off Wade's pitch-ahead pass and the other three Bulls have the three Heat players on the opposite side marked. If Gibson went for the rebound, it'd be 3-on-2 on the far side, not 3-on-3.

Meanwhile, here's Boozer doing the same thing, but from a more difficult angle. 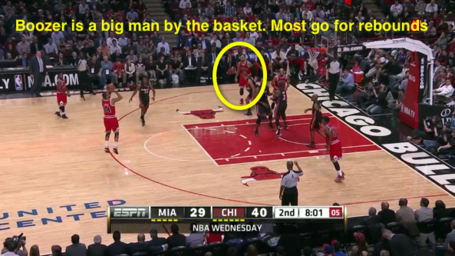 Gibson at least had the advantage in the above example of already being at the top of the key. Boozer is on the baseline, so it'd be easy for him to try to sneak in for a rebound. Instead, he drops back and makes sure to prevent Shane Battier from getting an open look at a three. 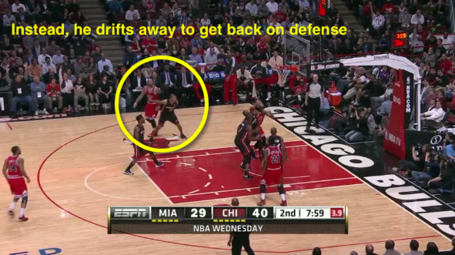 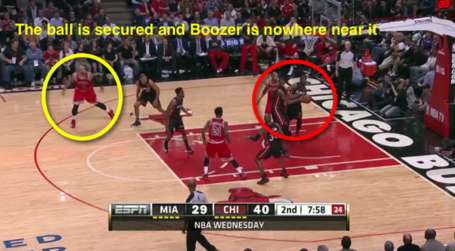 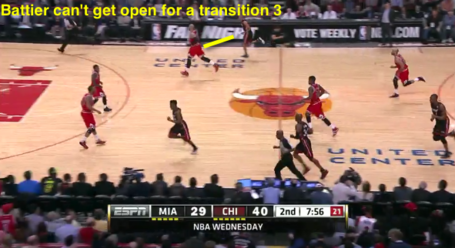 To the untrained eye, Boozer was being lazy, but as the final screenshot shows, his devotion to dropping back had a clear purpose. Battier is among the league's most dangerous spot-up shooters in transition. By prioritizing transition defense over offensive rebounding, Boozer has taken away that threat.

Finally, some of the Bulls' success here was due to plain ol' hustle. This shot by Gibson looks like trouble because the Bulls have violated their "two back at all costs" rule. 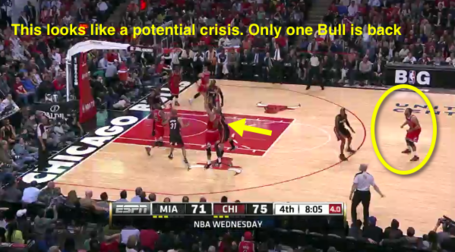 But Kirk Hinrich saves the day. In the above shot, he's under the hoop. Watch as he hustles to become that second perimeter player to be outside the three-point line. 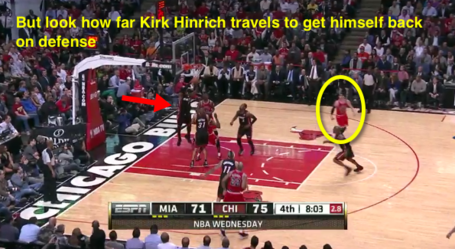 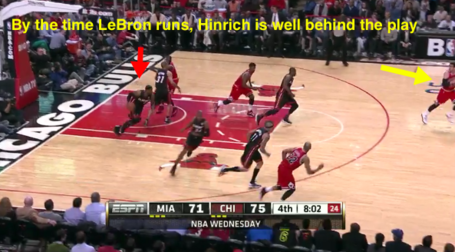 Hinrich was in good rebounding position, but rather than go for the ball, he understood where his team needed him most and dropped back. Miami still tries to run, but Hinrich properly communicates defensive assignments while retreating to cut off any chance at a fast break. 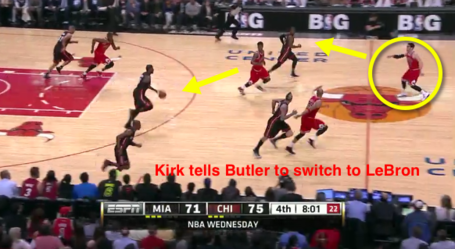 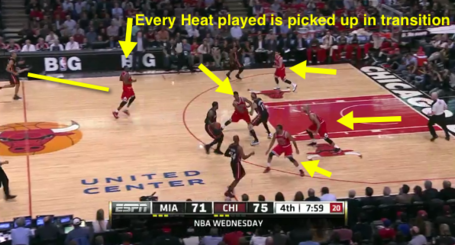 Transition defense is among the most thankless jobs in the league. Not only is there no individual stat for properly dropping back, but players often sacrifice individual stats (rebounds) in order to perform the task. But it's one of those elements of the game that separates winners from losers. There's a reason the undermanned Bulls have a better record than the star-studded Lakers this season.

It's also especially important against teams like Miami that can be so devastating on the break. You probably won't beat Miami four times out of seven anyway, but you give yourself no chance whatsoever if you allow them to get easy buckets in the open floor. By cutting off transition opportunities, you force Miami to play a half-court game.

The Heat might still win, of course, but at least they can no longer dictate the terms of engagement.

• Not just another win for the Bulls

• A Heat loss means nothing, and that says everything

• Ziller: Kobe did it again, gets away with blatant foul