A pair of dismal offensive performances on Thursday night has left the East Region without its top two seeds, and the Big East with some added swagger in its step.

Though Thursday's Sweet 16 schedule wasn't loaded with the same level of star power that Friday's is, the college basketball world was still expecting a quartet of highly competitive games to get everyone back in the tournament flow.

The college basketball world was disappointed.

Three of Thursday's four games were decided by double-digits, and in all three of those instances, the victor led comfortably for the vast majority of 40 minutes. There was intrigue, however, in the fact that two of those games involved the No. 1 and No. 2 seeds in the East going down.

Here's your look at anything and everything else that went down Thursday night.

Choosing the only game of the four that was decided by single digits is a no-brainer here, but this one would have been pretty difficult to top on any evening.

Just four days after Aaron Craft's buzzer-beating heroics saved Ohio State from a possible upset loss at the hands of Iowa State, the Buckeyes again found themselves in need of a deciding bucket in the closing seconds. This time Craft deferred to reserve LaQuinton Ross, who buried a deep three with 2.1 seconds remaining to send OSU on to the Elite 8.

The shot was easily the biggest in the short career of Ross, who has been frustrated often by his lack of playing time, and who entered Thursday averaging just 8.0 ppg. Still, his teammates weren't surprised at all by the sophomore's shining moment.

"I was so confident," said Lenzelle Smith Jr. "I was almost walking to the locker room when the ball went up. I knew it was going to go in.

After a slow start and a 38-34 halftime deficit, Ohio State led for the bulk of the second half thanks in large part to Arizona's 1-of-10 three-point shooting. Despite their struggles from the outside, the Wildcats managed to mount a late run that was highlighted by Mark Lyons' three-point play to tie the score at 70 with 21 seconds to play. That set the stage for Ross, who committed the foul that gave the Lyons the chance to tie the game, to save the day.

"When I got the foul, I was kind of upset," Ross said. "My players grabbed me and told me to calm down and worry about the next play. I was able to go down, able to run the play and execute."

Team That Won it the Best: Wichita State

The Shockers are back in the Elite 8 for the first time since 1981 thanks to a commanding performance against La Salle in a game where they led by double digits pretty much the entire way. Wichita State dominated the inside, notching a rebounding edge of 47-29 and outscoring the Explorers 40-26 in the paint.

Gregg Marshall's team limited La Salle to 36 percent shooting, the same mark they held Gonzaga to in their upset win over the No. 1 seed last weekend.

There's no question that the Shockers have more than just a puncher's chance against Ohio State on Saturday.

You can say what you want about the state of the program when Tom Crean took over and the turnaround job that he's done; that's all valid, but there's a reason the Hoosiers started the season ranked No. 1. No team in the tournament had or has more next-level talent than Indiana, so to see IU go out in the Sweet 16 and to see the way IU went out in the Sweet 16 was really disappointing.

The Hooisers are the latest member of Syracuse's 2-3 zone graveyard. The Orange held Indiana to 50 points, a season low for Crean's team and the second-lowest point total by a No. 1 seed in the shot clock era.

The numbers don't tell the whole story, though. For the first 30 minutes or so on Thursday, Indiana appeared to be terrified. They looked like the kid who has just discovered that bullying is more than something you see on TV, and who has no idea how to respond. By the time they were ready to fight back, the hole they'd been thrown into was too deep to climb out of.

The loss was Indiana's fourth straight to Syracuse since Keith Smart's shot broke the collective heart of the Orange fan base back in 1987. It also dropped the Hoosiers' NCAA Tournament record against Big East teams since that game to 0-7.

Buckeye fans have been waiting for something like this from Ross, who has appeared to be frustrated by lack of playing time throughout his sophomore season. The former four-star recruit became a March hero for OSU on Thursday, scoring nine straight points during a key stretch in the second half and then later burying the game-winning three-pointer with 2.1 seconds to play. Despite playing just 18 minutes, Ross finished with 17 points on 5-of-8 shooting, including 5-for-5 from the free-throw line and 2-for-2 from beyond the arc.

Highlight of the Day:

Did you say LaQuinton Ross game-winner?

Michael Carter-Williams, Syracuse - The ultra-talented sophomore may have played his best game to date at Syracuse, scoring a career-high 24 points to go with six rebounds. He also terrorized the smaller Indiana guards at the top of the Orange's 2-3 zone, and finished with a game-high four steals.

Mark Lyons, Arizona - Despite going head-to-head with OSU ballhawk Aaron Craft, the up-and-down Wildcat floor general was more up than down on Thursday. Lyons finished with a game-high 23 points and was 9-for-10 from the free-throw line. He didn't have an assist in the game, but he also only turned the ball over three times. Baby steps...for a senior playing his last college game.

Carl Hall, Wichita State - The versatile forward played only 27 minutes because of foul trouble, but finished with 16 points, eight rebounds and three blocks in the Shockers' thrashing of La Salle.

DeShaun Thomas, Ohio State - Ross has stolen all the headlines, but it was the Buckeyes' leading scorer who...well, led the Buckeyes in scoring. Thomas played all 40 minutes, hit 3-of-6 shots from beyond the arc and finished with 20 points.

Jamil Wilson, Marquette - Wilson hit 3-of-4 three-pointers and scored a team-high 16 points to go with his eight rebounds and three blocked shots.

There will be at least one more Big East game played after all.

After a highly disappointing first two days of the tournament that left experts around the country declaring that the conference had been overrated, the Big East saw two of its three remaining squads pull upsets over the No. 1 and No. 2 seeds in the East Region. The wins by Syracuse and Marquette ensured that the Big East will send a team to the Final Four for a fifth straight season, the longest such streak since the ACC sent at least one team every year from 1997-2002.

Perhaps more impressive than the five-year streak is the fact that six different teams - Georgetown, Connecticut, West Virginia, Villanova, Louisville and Syracuse or Marquette - will have represented the conference in the Final Four over that span. The Big East has an opportunity to send a third team to the Elite 8 on Friday when Louisville squares off against Oregon.

I'm not entirely sure what this is or how it was achieved, but I know that I like it.

It looks like one of those Jib-Jab videos whose shelf-life we all underestimated by about seven years. My only complaint is that no mock nose-picking act took place. I'm just assuming that's what the fake nose is there for.

Basically, this one was over before La Salle could even board the team plane.

More than a few people pointed out before Thursday night that one of the keys for Indiana would be the ability of its small guards to handle the length at the top of the Syracuse zone. To say that Yogi Ferrell and Jordan Hulls did not do that would be an understatement...or just an accurate statement...your pick.

Hulls and Ferrell combined to go 0-for-8 from the field and did not have a point between them. They dished out just four assists and tuned the ball over six times.

The main benefactor of this was lanky 'Cuse point guard Michael Carter-Williams, who recorded four steals and got a solid chunk of his career-high 24 points from fast break opportunities created by Hoosier turnovers.

Miami had a special season, winning both the ACC's regular season and tournament titles. A Sweet 16 loss isn't going to change that, but giving your worst offensive performance in the most important game of the season is going to be a pretty bitter pill to swallow for all of Jim Larranaga's guys.

Just how bad was it? The U's halftime shot chart paints a pretty vivid picture. 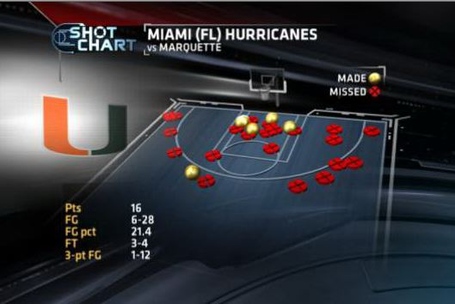 Or rather, the complete lack of La Salle Glitter Bro.

After enthusiastically helping guide his squad to a pair of tournament victories in Kansas City last weekend, GB was nowhere to be seen on Thursday night. Predictably, the Explorers' run ended with a 14-point loss.

Alicia, sing what I feel.

Midwest and South Region Games from Indianapolis and Arlington