Knowing when you don't know enough: Andrew Bogut is probably not the Warriors' biggest problem

Andrew Bogut has and will take flak in the Bay Area because the Warriors looked so good before he returned from injury and look so bad now. It's probably not deserved.

Share All sharing options for: Knowing when you don't know enough: Andrew Bogut is probably not the Warriors' biggest problem

Why yes, it is Socrates Week at The Hook. On Monday we asked you to consider why Andrew Bynum gets no benefit of the doubt when it comes to injury recovery when others, like Derrick Rose, get complete deference. On Tuesday, we ask whether anyone really knows enough to know whether Andrew Bogut's return caused the Golden State Warriors to go off of the rails.

The short version of the theory is that Bogut's re-entry to the line-up in late January killed Golden State's rhythm. Bogut played in the first four games of the season (Golden State went 2-2) then sat out until January 28. At that point, the Warriors were 26-17, looking like a legitimate mid-rung Western playoff team. Since then, Golden State has gone 8-10, and 5-4 in games in which Bogut played. Sports talk radio is sports talk radio, but you hear quite a bit about rhythm, flow and chemistry being upset since Bogut came back. 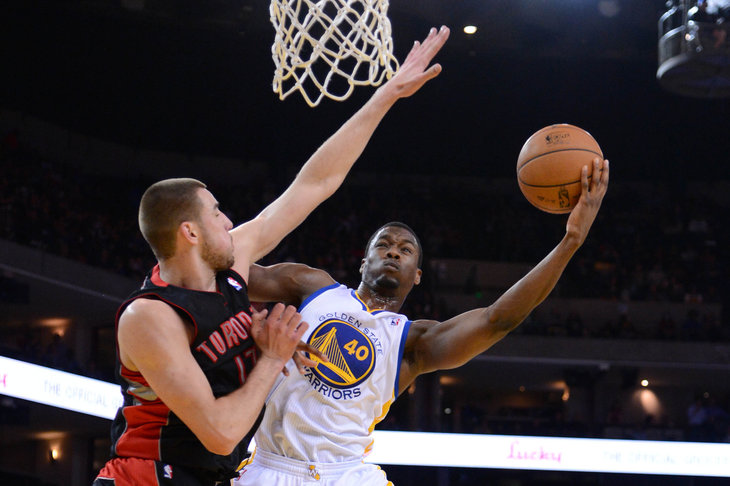 He played Monday for the first time in 10 days as the Warriors won to end a four-game skid. But the win wasn't exactly inspiring: the Warriors gave up 118 at home to the 23-37 Raptors who themselves had lost four straight. Golden State needed to drop 125 on one of the worst defenses in the league to win. Toronto's offensive rating was 117.7, and they picked up 37 percent of offensive rebound opportunities. (Something around 25 percent is average.) Andrea Bargnani scored an efficient 26 on 21 shooting possessions. Amir Johnson went 10-10 from the floor. It took Stephen Curry, David Lee and Klay Thompson shredding the Raps to beat an awful team at home by seven. Against stouter defenses, which is to say almost any defense in the league, this would have been a loss.

And to me, that's the key both to explaining the Warriors' troubles since January and insisting on Bogut's importance: the Warriors defense sucks. It sucked last year with this coaching staff and most of the rotation in place. (The exceptions: Harrison Barnes in place of Brandon Rush and Dorrell Wright, Bogut and Carl Landry added up front, Jarrett Jack added in the backcourt in place of Monta Ellis.) It's sucked through Stephen Curry's career. It's sucked through David Lee's Golden State tenure.

What we saw early this season compared to the greater trove of evidence looks more and more like fool's gold. On Sunday I looked at how the defense has fared over the course of the season. It was good for two months. It's been bad for two months. Given the personnel and its history of being largely poor on defense (with the exception of Jack and, when he plays, Bogut), I trust the latter more than the former. And believing in that the way I do, the logical next assumption would be that the defensive changes the team underwent in late December were regression to normalcy, not some Bogut disruption. 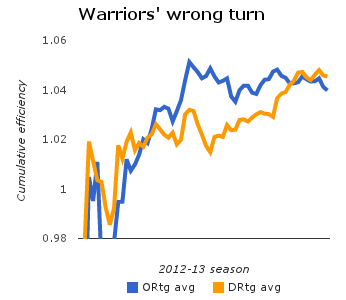 Need some semblance of proof? The Warriors' defense began falling off around Christmas, as the chart shows. Bogut didn't play between early November and the end of January. I struggle to believe that Bogut upset the Warriors' defensive rhythm from the trainers' table. But, who knows? Also, there's been an undercurrent that Bogut's recovery has forced the Warriors to play 4-on-5 on offense. There's no question that Bogut has been underwhelming on offense this year -- he's averaging less than 7 points per 36 minutes on 50 percent shooting -- but the chart shows that Golden State's offense hasn't suffered in the aggregate since the center return in late January. This team's fall has been predicated on worsening defense -- defense that was slipping before Bogut came back.

Of course, Bogut is supposed to fix the defense. That's what the Monta Ellis trade was all about: trading offense (of some flavor) for defense. It's not happening. Jetting Bogut out of Golden State isn't going to fix it, because a) Bogut is one of the better big man defenders in the NBA, and b) there's no one on the roster who can effectively replace him. Unless you can convince yourself that his bad offense is tamping down the team's performance at that end -- hard to argue given the January offensive stagnation sans Bogut -- it's difficult to make the case that the Warriors are better off without the center. So suggestions that the team sit him for the season and/or trade him in the offseason are based on gut reactions rather than data, assuming we're seeing the right data, which is hard to assume.

That gut reaction is the grape I think we should concern ourselves with crushing. Here's how the logic looks: the Warriors were good, Bogut came back, now the Warriors are bad. Ergo, Bogut is the reason. But you can't look at the first factor that seems to make sense and latch onto it as truth. You've gotta look at the whole picture. And the wider lens shows that problems in Golden State extend beyond the reach of the big Aussie. The data doesn't support blaming him for the any offensive shackles; the data doesn't support blaming him for in-season defensive regression. The data indicates that Golden State was not as good as its win-loss record indicated early in the season, and that the chickens are roosting in the barn right now. We'll see how the rest of the season plays out, with or without Bogut.