The Utah Jazz can't afford to drop winnable games if they want to hold off the Lakers and stay in the playoffs, yet that's exactly what they did in Milwaukee on Monday. We take a look at two critical defensive breakdowns that could easily have been avoided.

Monday's Jazz-Bucks game was, as amazing as it sounds, of critical importance to the 2013 NBA playoff race. The Bucks are comfortably in, but desperately want to move up to the East's seventh seed so they can avoid the Miami Heat in the first round. The Jazz were in the seventh slot in the Western Conference coming into the game, but with the Lakers charging hard, they can't afford to drop winnable games.

The level of desperation from both teams was evident, which made for compelling League Pass theater. In the end, the Bucks emerged victorious, 109-108, in overtime after Brandon Jennings tied the game late with a three-pointer. The win moved Milwaukee to within one game of seventh-place Boston in the East; the loss dropped the Jazz to eighth in the West, just two games ahead of the ninth-place Lakers.

A game that close causes one to point to so many different factors that could have swung the balance. A controversial no-call on a Gordon Hayward drive in the game's final minute of overtime mattered. Missed Jazz free throws mattered. A weird decision by Enes Kanter to shoot a layup with 1.6 seconds left and the Jazz down three, rather than kicking the ball out to a three-point shooter, maybe mattered. 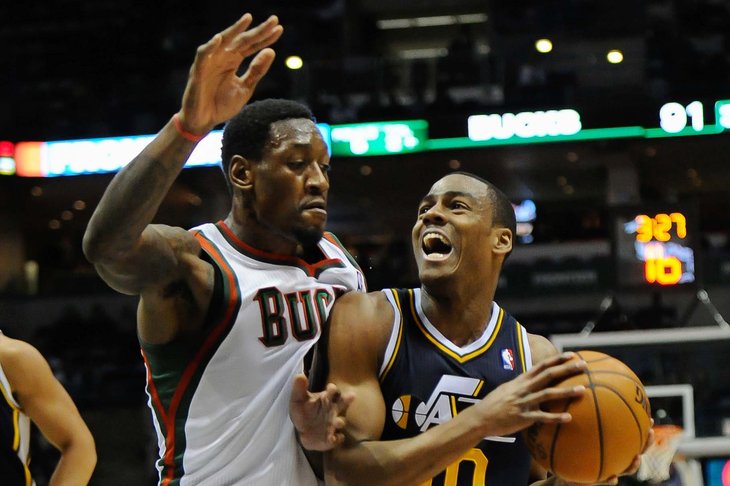 But if the Jazz are honest with themselves, their horrendous perimeter defense on J.J. Redick is what actually cost them the game. The new Bucks guard had eight points in overtime and could have scored a lot more in the fourth quarter if he hit a couple more wide-open shots. Redick is one of the league's 10 best shooters, and yet the Jazz kept leaving him open.

How'd that happen? Blame Hayward and DeMarre Carroll, the two defenders on Redick during OT. Here are two plays that stand out.

On this first play, Carroll is on Redick. Watch as he ridiculously plants himself in the lane, ball-watching and letting Redick slip out for a wide-open three.

The play begins with Redick cutting down the middle of the lane as Monta Ellis holds the ball in the mid-post on the left side. Carroll nicely stops the initial cut, but then forgets to keep connected to Redick as he curls back to the right wing. 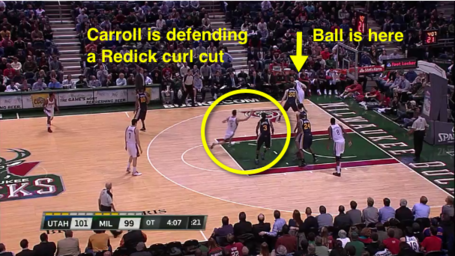 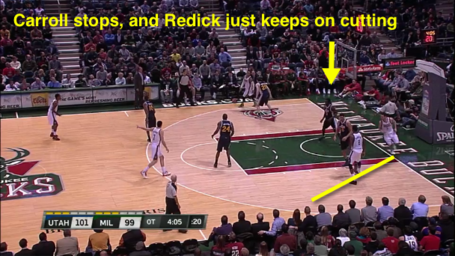 Why does Carroll just stop right under the rim? Good question. Perhaps he wants to act as a help defender to cut off Ellis' penetration, but he's in the same area as Enes Kanter, and Kanter could do the same thing. A smarter rotation would be to have Kanter cheat a bit off Larry Sanders, then have Carroll position himself near Sanders so he's cutting off both of Ellis' possible passing lanes.

Instead, he kind of just sits under the rim doing nothing. Ellis drives and Redick, by now, is wide open for three. 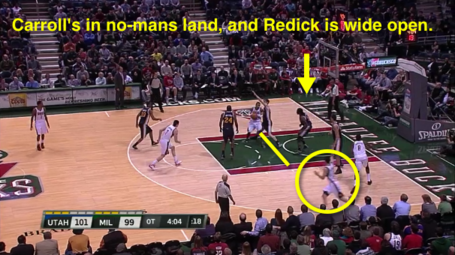 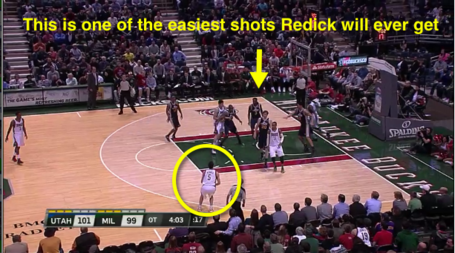 But Carroll wasn't the only Jazz wing player that got caught ball-watching in a critical spot. Redick's go-ahead three-pointer a few minutes later came because Hayward exhibited similar ball-watching tendencies.

This play begins with Redick setting a cross-screen to free Larry Sanders for a layup. Communication is critical here for the Jazz. Hayward must help Kanter to prevent Sanders from carving out position under the hoop, and as you can see, he does a pretty good job of that. 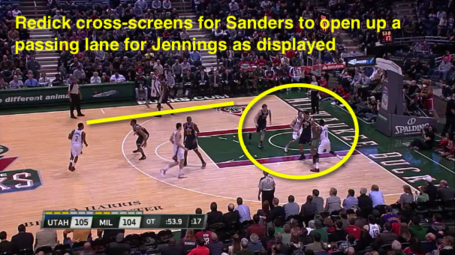 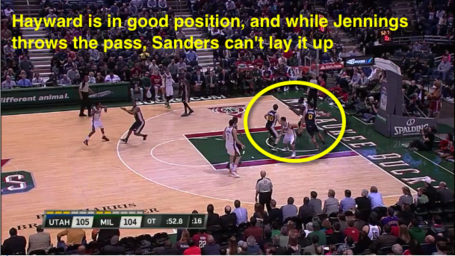 But Hayward's job isn't done. As all this is happening, Redick is sneaking out to the same right wing spot as before. Rather than immediately recover to chase him, Hayward waits too long, lingering in no-man's lane in the lane even when it's clear Sanders isn't a threat.

Where is Hayward looking, exactly? It's a really good question. Sanders is clearly no longer looking to score, and while Ellis has cut backdoor, there's no way Sanders can hand him the ball given the floor spacing. The most likely explanation: Hayward is stuck playing very undisciplined help defense and got burned.

Hayward realizes his error and runs back to Redick as fast as he can, but by the time Hayward recovers, it's too late. Redick hits the go-ahead three, and the Bucks never trail again.

These defensive breakdowns by the Jazz ultimately cost them a game they should have won. Hayward and Carroll are young, but in today's NBA, you have to be able to properly recover to your man when the initial play is cut off. Leaving a dangerous three-point shooter like Redick open will cause losses every time.

On the flip side, this was one of the major reasons the Bucks got Redick. Their perimeter shooting prior to the trade was suspect, and Redick directly addresses that. These Jazz breakdowns would have likely be less costly if a worse shooter than Redick had been left open instead.

• Dwight Howard: "Orlando was a team full of people nobody wanted"