This week, Spilly whipped up a Chicago-style hot dog that may cause an immediate heart attack. Enjoy!

It's lunchtime, Internet! Are you hungry? Today I have a bit of a special request lunch. Right now, we have a lull in sports, with regular season NBA and NHL and not-quite-tournament NCAA games, I'll be taking the next two weeks to give meals to those who donated back in the December Spillyfood Hunger Drive. Today's meal comes to you from Pete Gaines (@petegaines), so he's the person to blame if you no longer enjoy tubemeat again.

Pete asked me to make something that referenced the two places he calls home, Chicago and Kansas City. So, we'll be creating a Chicago-Style Hot Dog with some KC surprises thrown in for good measure.

I should note, this hot dog will end up rather...large.

STEP 1) The first step in any hot dog is the bun. You don't need fancy bread for this, any loaf will do. Find the cheapest white bread you can for under a dollar, scrape off any bonus mold and place on a countertop: 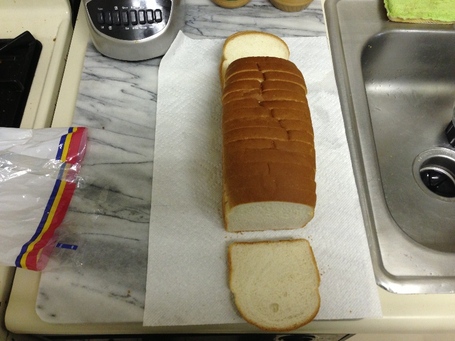 STEP 2) Chicago dogs are known for having poppy seeds on the bun, and this loaf has annoying tendency to fall apart, so we're going kill two birds with one stone and put it back together with a little bonding agent. 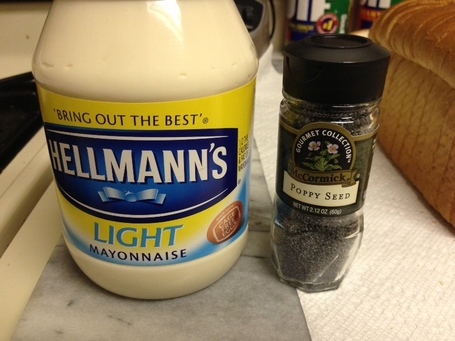 STEP 3) We're going to be using a lot of mayonnaise, so use a light variety to keep calories down! Grab a spatula and smear it on every single slice of bread. Both sides. Sprinkle each side lovingly with poppy seeds. 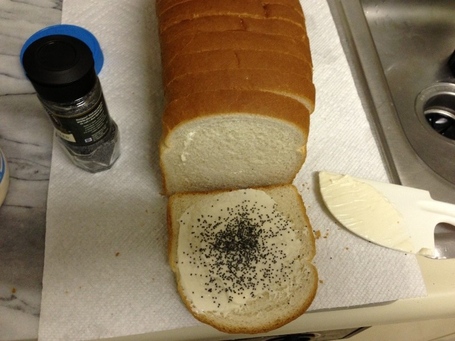 Keep on layering that mayonnaise! Only 24 slices to go! Each slice brings you ever close to the sweet caloric embrace of heart disease. 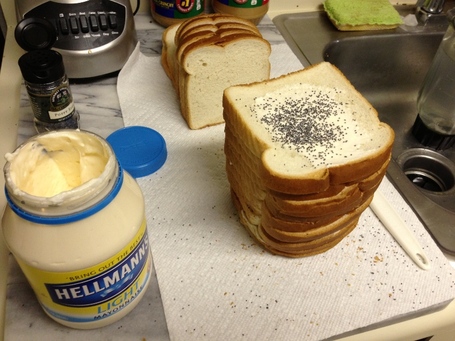 FOODTIP: Be careful to keep your stacked breadwich straight, or you'll end up playing a mayonnaise-based version of Jenga.

STEP 4) Our bun has been assembled! To make sure, brush some extra mayo and poppy seeds all along the top to seal up any cracks. It's like caulk made of eggs! 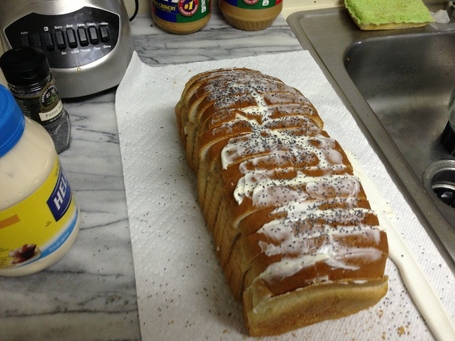 STEP 5) The only thing left to do on the bun is to slice it. Grab a giant serrated knife and gouge out a channel in the middle. 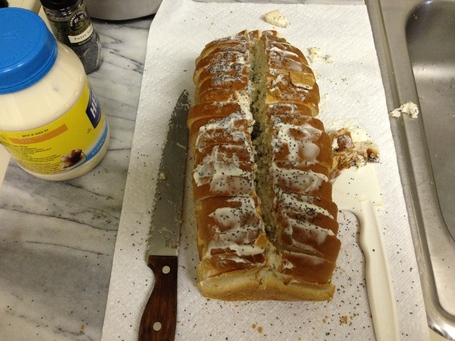 STEP 6) Before we get to the meat itself, let's work on a sauce for the toppings. Chicago dogs are known for having the works (minus ketchup), but that would require me to have vegetables, which I do not have. I do have the next best thing, however! 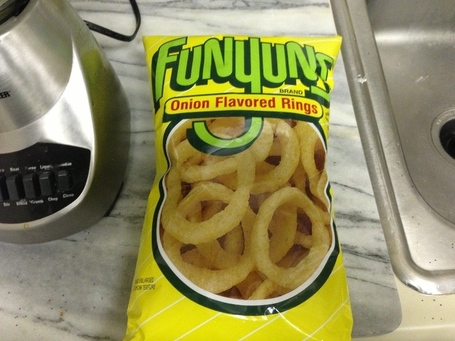 STEP 7) Funyuns are just like onions, but you don't have to peel them, chop them, or digest any of their nutritional value! They will go right in the blender. Let's move on to Kansas City. I wanted to add some Kansas City barbecue flavor to this hot dog, but I'm far too lazy to do anything close to ribs. I could do steak though! Well, it's... almost steak... 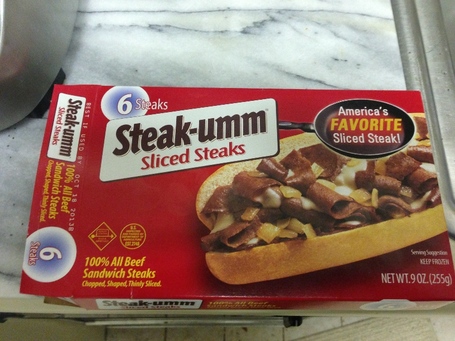 Layer some frozen meat parchments into the blender with the Funyuns. You may need to crunch them up a bit to fit in the meat.

STEP 8) I know nothing about actual Kansas City barbecue, so I just bought this instead. It has a map and a label so it is clearly 100% authentic! 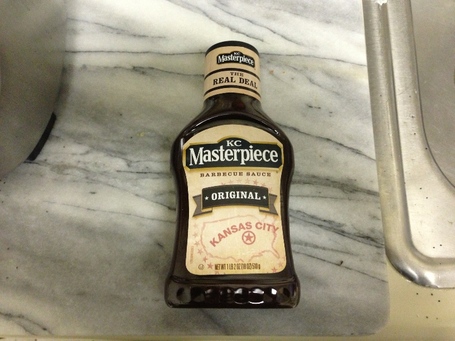 It's the real deal! It says so on the bottle! Pour it on top of your steak and Funyuns. While you're at it, why not just add in some pickles too? Relish is important on a hot dog. 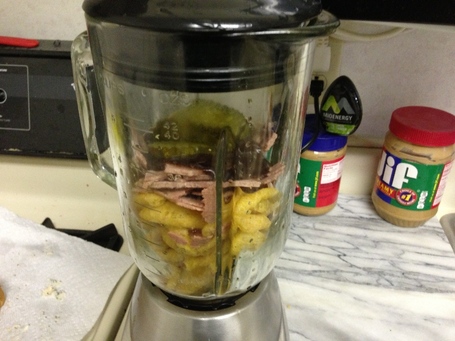 STEP 9) As part of an ongoing attempt for Spillymeals to be at least a small, minute, even an infinitesimally bit nutritious, I'm going to throw in a banana too. Bananas are important sources of Yellow which you need in your everyday diet. For this reason, just leave the peel on. Oh and cover it in Reese's Peanut Butter Shell. 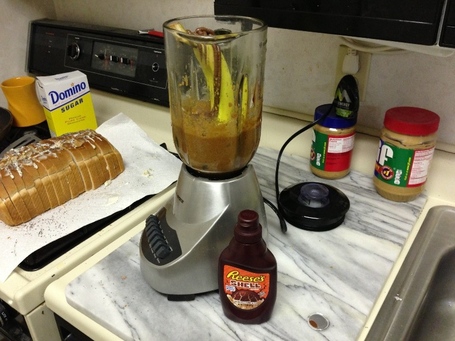 STEP 10) And now we come to the most important and crucial part of the hot dog, the meat itself. As you can see, I've left quite a lot of room here for a delicious dog. Not...not a real dog. No. Gosh. No. 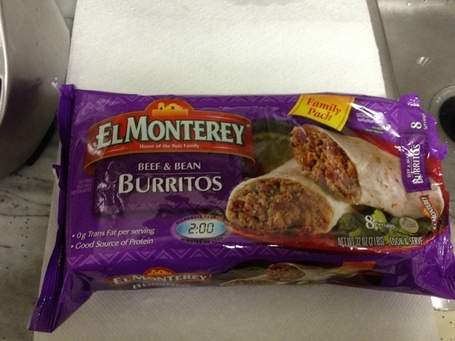 STEP 11) Layer out 3 of these on a paper towel and microwave it for two hours, which is what the package suggests, I think. You should get something like the following: 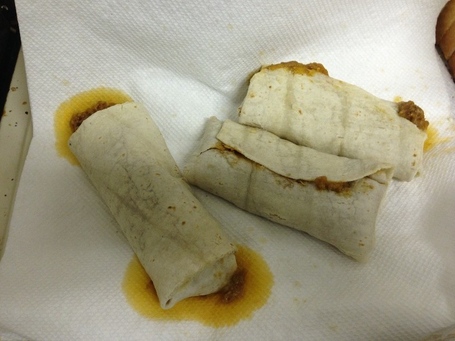 STEP 13) Now, carefully place these inside your bun, end to end. Make sure they stick out the ends a bit, just like a real hot dog! Also, make sure not to lose any of that delicious brown goop falling out the ends! 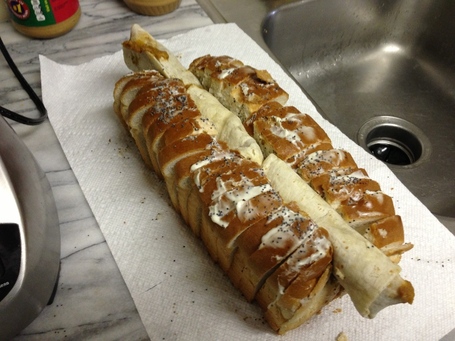 STEP 14) Lastly, pour your sauce directly on top of the hot dog. Decorate with mustard and Tangballs for a midwestern city treat!

Thanks Pete, for sponsoring the drive and giving me the great idea to make this hot dog. You are encouraged to take the first bite of this: 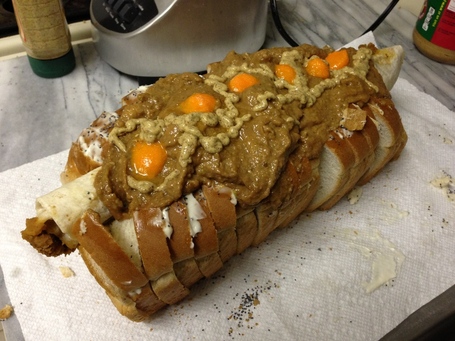