5 bellwether players of the NL Central

Here are the players whose successes and failures might work well as a metaphor for how the entire team performs in 2013.

Share All sharing options for: 5 bellwether players of the NL Central

Welcome to the second installment of Canaries in the Coal Mine*, in which we look for a player on each team whose success or failure could define how well his team's season is going. As goes (player), so goes the team.

* I know it's a terrible name. No going back now.

I love the risk, especially for a team coming off a pitching-first division title. The Reds had good pitching last year, but the rotation featured underwhelming (but much appreciated) competence that didn't have a lot of upside. Will Bronson Arroyo ever be as good again? Will Mike Leake ever be that good again in the future? Probably not for the former, probably so for the latter, but I wouldn't place a poker chip on either one. There wasn't a lot of upside in the back-end of the rotation, though.

Chapman is in possession of the most ridiculous left arm in professional sports, so it's not like you have to squint to see the upside. He smoked Randy Johnson mustache clippings before the 2012 season, and magically transformed into the same kind of strike-thrower that the Big Unit didn't get to be until he was 30. With any good arm, there's always an unnecessary "if he can command his pitches" disclaimer. But when you can say that about the best arm in the business, it's absolutely terrifying.

Of course, it could be a complete disaster -- for some reason it reminds me of Hawaii bringing in snakes to eat the rats, which forced them to bring in mongooses, which are just as annoying as rats. BE CAREFUL WHEN YOU MESS WITH NATURE, EVERYBODY. In which "nature" is defined as a left-handed reliever who was already successful in his old role. Remember, it wasn't that long ago when Chapman looked completely broken. It's easy to forget those dark days … but if we're suddenly reminded, the Reds' superlative 2012 bullpen and rotation would be in jeopardy.

You've probably heard of them, but you're a baseball nerd. There are people who follow baseball very carefully who might not know who they are. And, really, how do we know they aren't the same person? How random is it that the Brewers magically found two right-handed starters in their late 20s who suddenly decided to be good? You might get one of these stories per league in baseball, but not both on the same team. The two had a combined nine starts in the majors (all from Estrada) before the season, but 147 in the minors. Yet they combined for 278 strikeouts to just 65 walks in 266 innings.

If they're really that good, they combine with Yovani Gallardo to make for a pretty good front three. Any offense with Ryan Braun has a chance to score enough runs to compete, so if Estrada and Fiers are really quality mid-rotation pitchers, the Brewers will bother the Reds and Cardinals all summer. If they disappear as quickly as they emerged, the Brewers will find themselves watching Matt Kinney spot starts and wondering how they got there.

Forever and ever, always Pedro Alvarez. It isn't until I got to the Pirates that I realized that I'd used the "organizational bellwether" idea before -- with Pedro Alvarez and the Pirates:

And of course it's Pedro Alvarez who had ups and downs and downs and ups, just so you couldn't get a read on what kind of player he'll be. That's so very Pirates. I can't tell if the Pirates are going to lose 85 games or win 85 games, and part of the reason is because they have an enigmatic, would-be star in the middle of their lineup who might be the best or worst hitter on the field on any given day.

Samardzija is a football-prospect conversion tale that actually worked out, and he combines that backstory with some of the weirdest minor-league stats you'll ever see. In his first full season in the minors (High-A), he matched Kirk Rueter's strikeout rate in the majors: 3.8. After that, he started averaging more than a walk every other inning, and at no point did he prevent runs like you'd expect from a prospect. Then he came up as a reliever, found instant success, lost his control entirely, came back to have a renaissance season as a volatile, high-walk reliever, and then last season reemerged as a starting pitcher with above-average command.

I've read that paragraph six times, and I don't remember writing it. It seems like complete nonsense. Bunch of made-up nonsense, and whoever wrote it should be ashamed.

But let's assume that last year was the real Samardzija (and there's no reason not to.) That's a valuable pitcher as-is. The Cubs are still projecting more for Samardzija, though, hoping he can build on his quasi-breakout last year. And considering that the Cubs don't have any pitching prospects of note in the upper minors -- other than Arodys Vizcaino, who's recovering from Tommy John surgery -- suddenly the Cubs' decision to sign Edwin Jackson makes more sense. They can't count on a wave of young arms coming through the system, so they have to do what they can now.

Samardzija is a big part of that, and the season he has will dictate the kind of long-term moves the Cubs will make in the offseason, especially with Matt Garza a free agent.

You can read my paean to him here if you're interested, but the main idea is this: Oscar Taveras probably rode to Earth on a comet to save us from something. Until that day, we'll get to follow his baseball career.

But if that career involves substantial major-league time this year, there are questions that need answering. What happened to the starting outfielders already in place? Even if Taveras hits .350/.450/.650 in Triple-A this season, he isn't going to force his way past Matt Holliday, Jon Jay, or Carlos Beltran if they're all producing. If Taveras is starting, does that mean Beltran is hurt? Is Holliday hurt? Is Jay ineffective? Is the offense struggling and in need of a jumpstart?

Something's going on if Taveras is starting. Then you actually have to wonder how he's performing -- he's still just 20. Even Mike Trout struggled in his initial big-league trial, so it's not as if you can guarantee Taveras's immediate success. And in that case, the Cardinals would have more bad news on top of the bad news that led to Taveras starting in the first place.

Either way, it looks like the Cardinals will be curious to see how their minor league guy is doing. 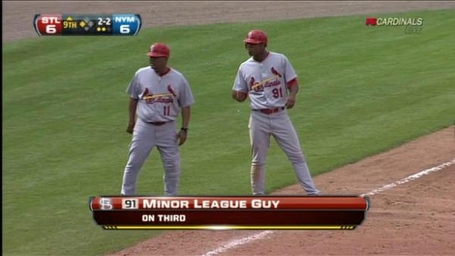 It could be the difference in their season.

• Mike Trout and the Angels being weird

• Bill James: Davey Johnson’s already in the Hall of Fame

• The Red Sox might not be as bad as you think