Rudy Gay and the nebulous benefit of 'star power'

The Raptors will reportedly offer Rudy Gay an extension in the summer, because they want to retain star power. What?

Share All sharing options for: Rudy Gay and the nebulous benefit of 'star power'

Committing $37 million over the next two seasons to Rudy Gay isn't enough, apparently. Yahoo!'s majestic Marc J. Spears reports that Bryan Colangelo's Toronto Raptors will try to negotiate a contract extension with Gay in the offseason. An extension for a player with two years left on his deal, the second of which pushes up against $20 million! (For many reasons, it's unclear why the Raptors would choose now to do it, including that the NBA cap on extension terms is four years. So they'd just be adding two high-priced seasons to Gay's contract. Gay cannot negotiate his current salary downward due to collectively bargained rules.)

There is a whole lot wrong with Toronto. My biggest problem is this.

The struggling Raptors appear to believe in Gay. General manager Bryan Colangelo already views him as the face of the franchise, and a source said he will likely offer a contract extension in the offseason. Toronto is in need of star power since the departure of Chris Bosh and the demise of Andrea Bargnani, the former No. 1 draft pick.

The Raptors are 8-8 since making the trade for Gay, and 8-7 in games in which Gay played. That's good! That's improvement. Is it going to get much better? Gay has in Toronto been exactly what he's been over the past few years: a relatively inefficient volume scorer who offers little else on the court. He's shooting 39 percent with Raptors, getting his 20 points per game on 21 shooting possessions. That's not a rare talent worth paying $20 million for. It's a talent, sure, and it's worth something. But not $20 million.

The Raptors are going to give him $20 million a season for four more seasons?

At this point, saying that Blake Griffin is all dunks and mean-mugs is just silly. He has a very real floor game, and has throughout his career. On Wednesday he dropped a triple-double on the Bucks, with 23 points, 11 rebounds and 11 assists. It was Griffin's third career triple-double; what's notable is that he did it in just 33 minutes. There have been only 20 sub-30 minute triple-doubles since 1985-86, with Kevin Durant picking one up late last season.

"Star power" is so useless. The Raptors have always drawn pretty well, despite typically mediocre rosters. Marketable stars are good for the bottom line because they can draw the attention of the casual fan. But winning does that far better, and a team paying Rudy Gay $20 million repeatedly is going to have trouble building a winning team. That desperately needed "star power" isn't going to get the Raptors anywhere in the long run unless Gay massively improves or Colangelo pulls a couple of rabbits out of his Fedora.

The salary cap is real. The Raptors' owners aren't going to be paying the luxury tax. Figure that during Gay's extended deal the luxury tax threshold will climb up to $75 million. If Gay signs for $20 million in the extra two years, matching his 2014-15 salary, he'll be soaking up more than a quarter of the payroll. The other $55 million Colangelo has to play with needs to account for four starters, seven rotation players and 11 roster spots. That is a totally unnecessary hurdle to overcome, especially considering Gay has never and will possibly never be even an All-Star.

To make it work well enough for the Raptors to be a truly winning team -- a legitimate competitor in the East -- Colangelo would need to ace the draft and find great value in free agency and trades. Does anyone count on Colangelo doing that based on recent history?

'It was a tug of war at times' 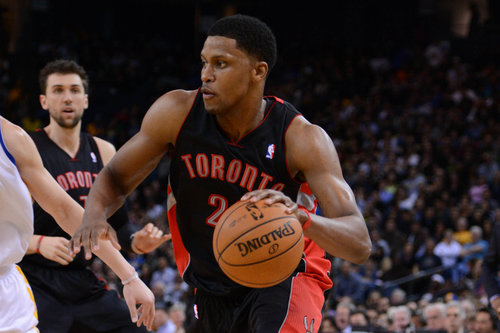 Rudy Gay reflects on his departure from Memphis.

To me, latching on to a theory that the Raptors need star power is an admission by the Raptors that Colangelo can't build a winner, which, frankly, the evidence suggests is true. When the standard for "star" is so low so as to include a player like Gay (who, again, has never been an All-Star or an All-NBA awardee), it does the fans a disservice. Didn't Andrea Bargnani teach Colangelo not to pay exorbitant salaries to players outside the league's upper echelon? Apparently not.

The other thing that bothered me in Spears' piece was Gay's continued insult at the Grizzlies trading him. An example:

Rudy Gay says the Memphis Grizzlies' new ownership didn't give him a shot to prove he was worth a multi-million dollar investment before it traded him in a three-team deal to the Toronto Raptors in January.

"You have to give me a chance to see if I'm worth that," Gay told Yahoo! Sports.

What ... 161 games under the new contract wasn't enough? Furthermore, it's been widely noted that since a shoulder injury in 2011 -- the first season Gay made huge money -- the forward's shooting efficiency has fallen off of a cliff. That continued for the first half of this season, with Robert Pera and Jason Levien in place. The new owners had all the data on Gay's regression and lack of elite ceiling, they know how the cap works (Levien has been both an agent and an assistant GM in the league) and they are learning this team. I mean, the Grizzlies are 11-4 since the trade. You can't really argue with that, you know?

The wizardly Bruce Arthur of the National Post put it jarringly proper in a column on Wednesday: the Raptors throughout their existence have largely been a prop in the greater NBA scene. To bet heavily on Gay is do what the Raptors always seem to do, which is to make a decision that all but guarantees continued irrelevance.

Star power for the sake of star power is a foolish chase. Build winning teams, not marketing campaigns. Calling an average player a star because he's paid like one and scores lots of points is even worse. I thought the NBA had reached the era of dull sanity. Toronto's proving that wrong.

• The NBA feeds its own conspiracy theories

• GIFs! The Week in Worst: Hope you like air balls