The Houston Rockets have electrified the league with a high-powered offense, but until they significantly improve their defense, they run the risk of missing the playoffs. We break down just how bad Houston's weakside D really is.

Share All sharing options for: The Houston Rockets have serious defensive problems

The Western Conference playoff race has tightened up considerably. Wednesday's thrilling win over the New Orleans Hornets pulled the Los Angeles Lakers to within 1½ games of the playoffs. The Lakers have played relatively well recently, of course, but they needed help in getting back into the race. Recently, they've received that help from the three teams ahead of them in the race: the Houston Rockets, Utah Jazz and Golden State Warriors.

We talked about the Jazz's woes Tuesday. Now, let's talk about the Rockets. Specifically, their leaky defense that could cause them to drop out of the playoff picture.

Led by James Harden and a plethora of outside shooters, the Rockets have one of the league's best offenses, but their defense gives it all back. They're ranked 23rd in defensive efficiency for the season and 27th since Feb. 1, via NBA.com's media stats page. Since that date, they've allowed opponents to score an average of 109.3 points per 100 possessions. Only Portland, Sacramento and Charlotte have been worse.

THE DREAM SHAKE: Royce White, through the looking glass A look at Parsons

It's tempting to blame this decline on the team's wide-open style of play, which puts smaller players on the court to spread the floor offensively. However, in watching the Rockets' latest costly loss, a 112-108 defeat in Dallas Wednesday, it's clear the Rockets' defense suffers from two major problems that have nothing to do with size.

The first: ball watching. The Rockets' perimeter defenders have an awful habit of losing track of their man when they are defending someone on the opposite side. Your grade-school coach always tells you to see ball and man. Too often, the Rockets' wing defenders only see ball.

Here's one breakdown by Harden in the first minute of Wednesday's game. The Mavericks have launched a three-pointer in transition that missed, and Harden drops off his man to help on the glass. 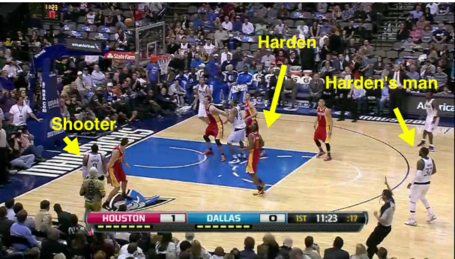 But watch what happens once Harden doesn't get the rebound. He just sits in the lane watching the ball, right as Shawn Marion cuts in front of him for a layup. 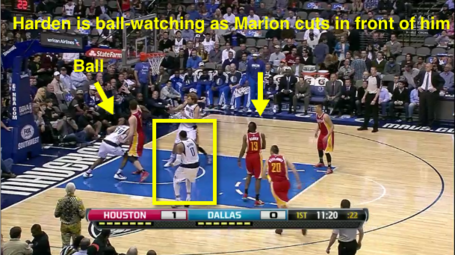 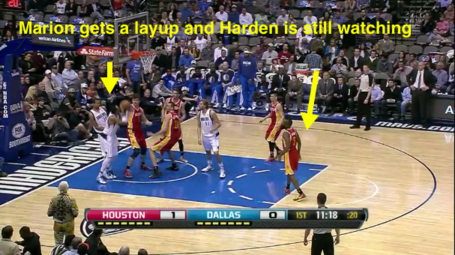 Harden's man isn't around the paint, to be fair, but if Harden is going to drop down to the lane, he has to actually help against a cutter like Marion. Otherwise, he's just a spectator in no-man's land.

Harden isn't the only Rocket prone to ball-watching, though. Watch as Chandler Parsons loses sight of Dirk Nowitzki on a backcut in the second quarter.

The play begins with a pick and roll between Darren Collison and Nowitzki. Parsons doesn't trap well, allowing Collison to turn the corner, but it shouldn't matter too much. Donatas Motiejunas steps up to contain Collison, which should theoretically allow Parsons to scurry back to Nowitzki and contain the Mavericks' top threat.

Instead, Parsons' eyes are addicted to the ball. 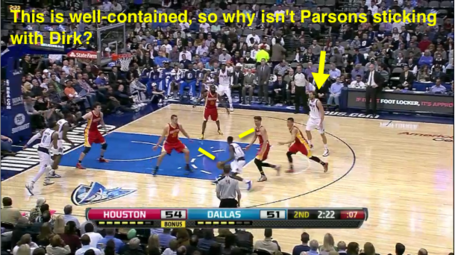 This addiction doesn't stop once Collison drops it off to Marion. Rather than recover to Nowitzki, Parsons stares at Marion, even as Motiejunas recovers to close out on Marion's drive. 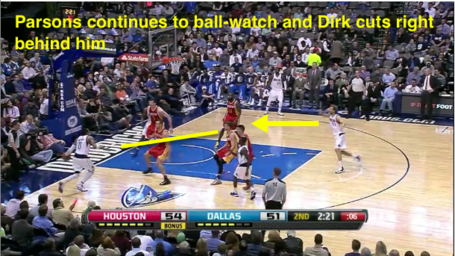 This opens Nowitzki's backcut. Amazingly, Parsons retreats right into Nowitzki's cut accidentally and still can't intercept the pass because he doesn't realize Nowitzki is there. This is the end result. 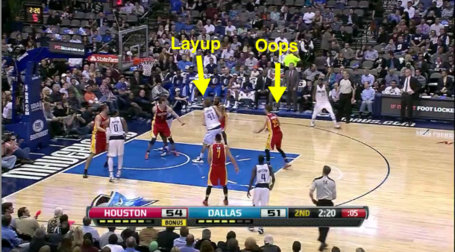 That's one issue. The other, more perplexing one: the Rockets' tendency to over help. It's like they can't find a happy medium with their weakside defense. Either they fall asleep and leave guys open, or they swarm the ball unnecessarily and open up easy passing lanes.

Here's an example that involves Parsons. The Mavericks force a switch on a pick and roll, leaving Jeremy Lin to guard Nowitzki at the elbow. This is not an ideal situation, of course, but you have to be careful when providing help. If you help too soon, Nowtizki can see the entire floor and pick your defense apart. The Mavericks have perfectly positioned two shooters on the weakside in the event of a double team, and the Rockets have to recognize that and not tip their hand with their coverages. 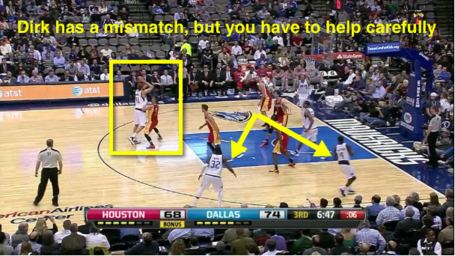 Alas, they do. Look at what Parsons does here. 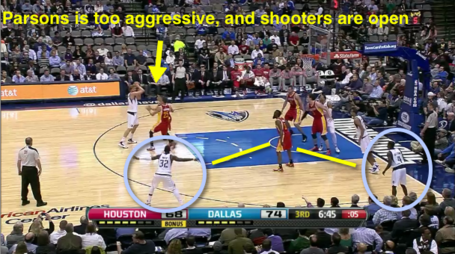 By doubling Nowitzki before he even makes a move, Parsons has compromised the Rockets' defense. He's forced Harden to cover two perfectly-spaced shooters on the weakside, and nobody can do that properly. All Nowitzki has to do is swing the ball to O.J. Mayo, who can then swing it to Collison in the corner. That's the easiest double-team read in the book. 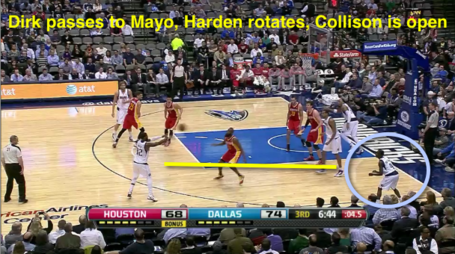 Here's another example from the fourth quarter. Some context: before this play, Vince Carter hit two consecutive open three-pointers. As a defense, you want to be careful to help off someone that hot unless it's totally necessary. Given the way this drive by Mayo is being defended, it probably isn't totally necessary for Carlos Delfino to help like this. 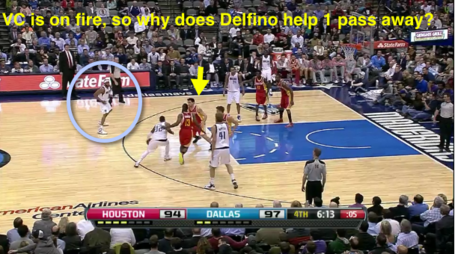 For one thing, Harden is staying right with Mayo. For another, you always want to be careful when you drift off a guy that the ball-handler can easily feed. This concept, known as helping "one pass away," is something most good defensive teams try to avoid. Had Delfino taken a single step off Carter to slow Mayo's penetration rather than helping all the way -- a motion known as "stunting" -- it would have made more sense. Instead, Delfino slid over way too far and opened up Carter for his third three-pointer of the game. 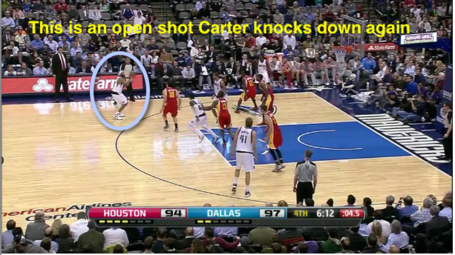 So, you have lots of problems at play. The larger theme: The Rockets are a team that fails to communicate weakside defense properly. This one play from the second quarter sums up a lot of Houston's problems. As you can see in this first shot, things start to break down when Delfino lets Carter cut backdoor on him while Elton Brand has the ball in the post. 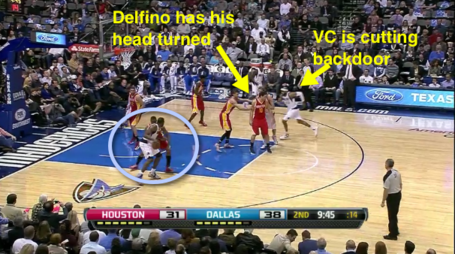 Delfino must think that Francisco Garcia, pictured under the hoop, can pick up Carter for a second. Instead, Garcia is trying to sneak behind Brand on a weird double team. 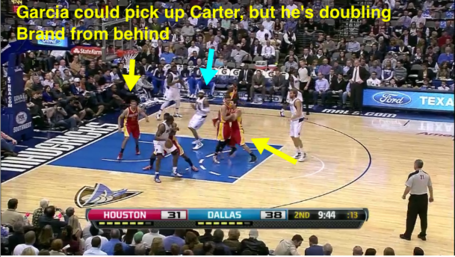 In response to Garcia's double, Jae Crowder drifts to the corner. That sets up a situation where three Rockets are guarding two Mavericks, giving Brand an easy passing lane to Crowder. 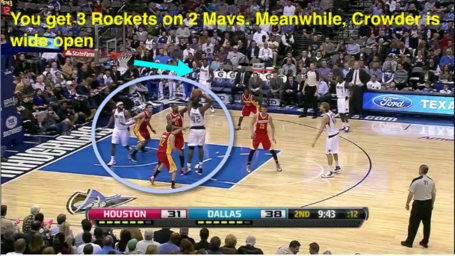 Crowder then swings the ball to Collison, and Garcia makes matters worse. Garcia has already put himself well out of position with his ill-advised double team, and now he runs out on Collison even though Patrick Beverly, the man in the corner that's forced to defend both Crowder and Collison, does the same. 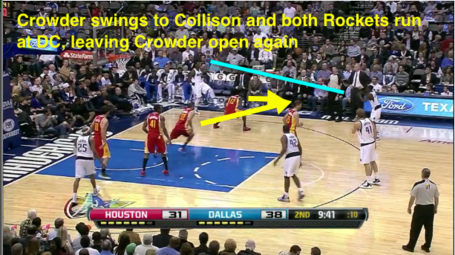 That leads to an open Crowder three that he swishes. 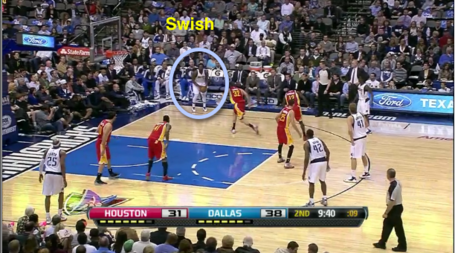 We've reached an era of the NBA where you can play sound defense while going small. Sure, you give up a bit on the boards, and bigger teams can pound you inside, but given the way so many clubs run pick and roll and spread the floor, a sound strategy with good help defensive concepts should allow you to compete. But as demonstrated above, the Rockets lack this kind of direction. Blame the players, the coach or whomever else you want, but that has to change.

Otherwise, the Rockets really will continue to be a gimmick team in the future.

• Kyrie Irving could be shut down

• The NBA feeds its own conspiracy theories