WHEEL ROUTES: Roger Goodell is not the most powerful person in sports

This week in Wheel Routes, Robert Wheel explains why Roger Goodell isn't the most powerful man in sports, addresses the Falcons stadium deal and the surprisingly profitable Panthers and more.

Share All sharing options for: WHEEL ROUTES: Roger Goodell is not the most powerful person in sports

If you think Roger Goodell is the most powerful person in sports then you've never had to deal with a board of directors before. The same week that SI put him atop an iron throne ESPN's Don Van Natta Jr. had an illuminating profile of the Ginger Hammer. Van Natta noted that powerful owners like Robert Kraft and Jerry Jones have said that Goodell has a wide berth to do his job. But if he's been given such a wide berth to do his job, why does he act like every decision has his job riding on it?

I've worked with CEOs who were afraid of the board of directors and those who weren't. If your CEO is afraid of the board then every action verges on overreaction. There's no long term vision, they're just trying to make it to the next board meeting. They careen from decision to decision without engaging in much of a process, all as an attempt to please the board. But CEOs who have a long term vision act deliberately. If they truly have the board's backing then they can implement a long term vision, something that Van Natta notes that Goodell lacks.

If Roger Goodell really were thinking about how the NFL would look five years out would he still be pressing for an 18-game schedule that nobody except those interested in short-term revenue thinks is a good idea? Would he overreact to flimsy evidence in the Saints bounty scandal? Would he have locked out real referees only to reverse course after that decision proved a disaster? Those are the hallmarks of a man who's always looking over his shoulder at his real bosses.

Goodell apologists may note that he hasn't been afraid to go after prominent owners like Robert Kraft and Jerry Jones. But losses of draft picks and minor cap penalties pale in comparison to the league's profitability (see the Panthers item below). Goodell's reckless disregard for player safety (and the truth) could haunt the league in the future, and his hamhanded tactics will backfire like they did with the Saints bounty scandal.

Everyone's a good manager when their company is profitable, but the NFL probably would do fine without Goodell in charge.

Goodell apologists may also argue that the league has never been more successful. But individuals have a mostly negligible effect on large organizations. NFL owners like to think of themselves as self-made men so of course they're willing to attribute the success of the league to Goodell even though he has had little bearing on the league's success, just as many owners owe their fortunes just as much to luck as gritty determination. The NFL's success is due to forces out of Goodell's control. All he can control is the margins, where he has a propensity to screw things up.

Everyone's a good manager when their company is profitable, but the NFL probably would do fine without Goodell in charge. After all, the more a company pays a CEO the worse it performs. That study confirms what I've argued about Goodell; when you're propped up with $30 million per year and a Sports Illustrated cover you become overconfident and reckless. If Goodell really were a good commissioner then he'd keep his job even if the NFL were no longer profitable. But he isn't, so he won't.

I don't know who the most powerful person in sports is. But it's not the guy who's out of a job if NFL owners start losing money.

The Georgia Dome is obsolete after only 21 years.

The Georgia Dome has to be torn down and replaced even though it's barely old enough to drink. Most of it will be financed by the Falcons themselves but $200 million will come from Atlanta raising hotel taxes. Hotel taxes are an easy sell because they aren't levied on the constituents that politicians represent. Yay gutless taxes! Of course, we don't know if the hotel taxes will fall short of providing the projected revenue and who will cover cost overruns, so let's not canonize Arthur Blank just yet for only accepting $200 million from the city of Atlanta.

Still, the next time you visit Atlanta, you sleep on your friend's couch instead of getting a hotel room. If he doesn't like it then he can complain to his city councilman. 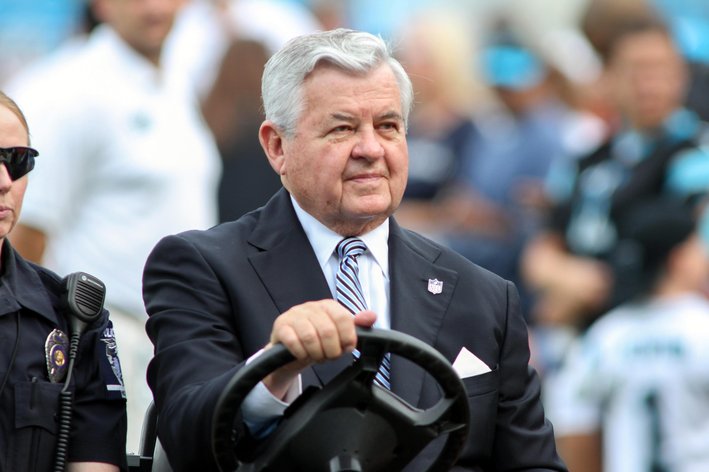 The public got a rare inside look at NFL profits with a leaked copy of Carolina's financial statements. What can fans takeaway from the numbers?

Surprise! The Panthers are loaded and don't need taxpayer money.

You're not going to believe this, but an NFL team cried poverty but is actually quite profitable. The good folks at Deadspin, a website whose enemies list I seek to stay off of, found the Panthers' owners' audited financials and as it turns out the Panthers make a killing. The team's response was that its cash flow was only eight figures, a problem that a lot of unprofitable companies would love to have.

Meanwhile, the starting salary for a teacher in Charlotte is around $35,000. So maybe the Panthers can pay for their own damn stadium while taxpayers can focus on people who actually need their money.

Troll Tuesday godfather Skip Bayless is an easy mark for fellow media members because his shtick is so odious. But why the hell should players stoop to his level? Unlike him, they bring value. Richard Sherman, you're better than this. The next time Bayless insults a player, his response should be "who's Skip Bayless?" When your enemy only desires attention, rob him of it. We already know that you're better than him. Everybody is.